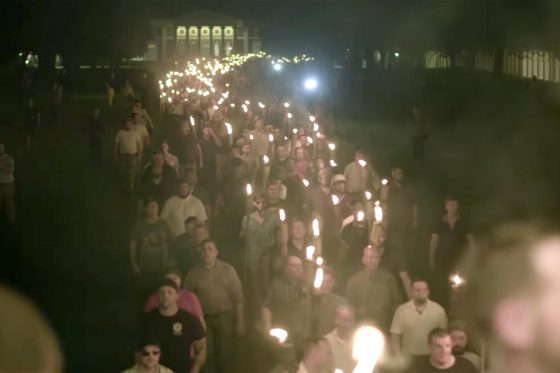 After watching this video, I find myself getting angrier and angrier at both the alt-Right and the alt-Left. I never dreamed that this kind of hatred was like this in America. It sickens me. The racism on both sides is just mind-blowing here. This is not going to end well if this is not stopped. And somewhere behind all of this are communists egging people on.

VICE News embedded a reporter with the white supremacists for Unite the Right and what they caught on video is absolutely terrifying. This isn’t a movie… this crap is really happening. I’m just as horrified by the KKK, neo-Nazis and white supremacists here as I am the communists, Black Lives Matter and Antifa. If you watch one video this week, make it this one. It will chill you right to your very core. Now I understand why things spiraled out of control in Charlottesville, Virginia the way they did.

Monday’s episode of HBO’s VICE News Tonight went behind the scenes of this weekend’s violent protests in Charlottesville, and now, the full, eye-opening 22-minute segment is available to view for free on YouTube.

The episode begins with footage of white supremacists chanting phrases like, “You will not replace us! Jews will not replace us!” and counterprotesters shouting “No Nazis! No KKK! No facist U.S.A.!” It then launches into an interview with “Unite the Right” speaker and white nationalist Christopher Cantwell.

“When Trayvon Martin case happened, Michael Brown, and Tamir Rice, and all these different things happened — every single case, it’s some little black a—hole behaving like a savage and he gets himself in trouble shockingly enough,” he tells VICE reporter Elle Reeve. “Whatever problems I might have with my fellow white people, they generally are not inclined to such behavior. You gotta take that into consideration when you’re thinking about how to organize your society.”

I have heard there are only a few hundred of these white supremacists out there, but it feels like there are a lot more. I know there are an awful lot of Antifa out there and they are growing. And both of those groups are left in the dust by Black Lives Matter. As you watch this, realize that the left was just as violent as the right here. Both brought weapons and both got their violence on. The media would have you think it’s just the right, but that isn’t true. The communists on the left are as bad or worse in some respects. Hell, they’re all bad.

In the end, it was a radical on the right who took the life of a 32 year-old white woman who was protesting with Black Lives Matter. The deranged psychopath who did that owns it. But all of these people on both sides are responsible to a greater or lesser extent for going there to fight each other. The actions of these people literally make me sick to my stomach. It’s important to watch the video if for nothing else to see how people acted and reacted.

The white supremacists here are nuts. They did not help their cause at all — they empowered the left greatly here. they showed just how racist, violent and hateful they truly are. They should be designated as a terrorist group… just as Antifa and Black Lives Matter should be. I’m just disgusted by all this. 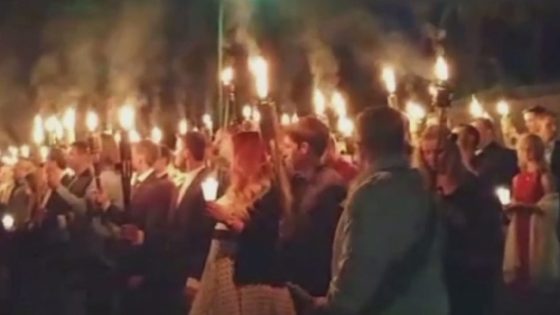 Well, that didn’t take long. I predicted when all of this racist crap started that the lefty communists would move quickly from confederate statues onto other targets and here we go. The Lincoln Memorial was defaced yesterday with the ‘F’ word and other graffiti. Then, so-called Social Justice Warriors set their sights on the American Museum of Natural History in New York City. Hundreds demanded that a “racist” statue of former President Theodore Roosevelt be taken down. I strongly suggest they don’t do that. And the communists and radicals won’t stop there… they have a huge list of targets across the nation, including anything to do with the Founding Fathers.

This smacks of religious fanaticism and extreme hatred and violence. By Christmas… if this continues and I don’t see why it wouldn’t… you won’t recognize this country anymore. Meanwhile, things are boiling over. In Dallas, black patriots are vowing to protect Confederate statues. Texas A&M just announced that it would not let a “White Lives Matter” rally take place on its campus. And white nationalists are gearing up for another huge rally in Kentucky. The powder has been lit and a fractured country is about to explode.

Social justice warriors are never satisfied. If you give them an inch, they’ll take a mile. After demanding that southern states take down statues of Confederate figures, the activist Left is now targeting an iconic American president featured on Mount Rushmore.

On Monday, more than 200 SJW zealots held a protest inside the American Museum of Natural History in New York City to take down the supposedly “racist” statue of former President Theodore Roosevelt. The protest’s organizers, NYC Stands with Standing Rock and Decolonize This Place, also called for Columbus Day to be renamed Indigenous People’s Day.

“A stark embodiment of the white supremacy that Roosevelt himself espoused and promoted,” pontificated the group of protesters in a statement. “The statue is seen as an affront to all who pass it on entering the museum, but especially to African and Native Americans.”

Marching around the museum in a fit of self-righteous rage, protesters carried signs that read “BLACK LIVES MATTER,” “DECOLONIZE THIS MUSEUM,” and “ABOLISH WHITE SUPREMACY.”

Left-wing activists moved from exhibit to exhibit at the American Museum of Natural History in a trance-like motion burning sage and exuberantly playing Native American music. It was surreal. “The group started with a 10-stop tour of the museum in which they highlighted a variety of exhibits they felt were racist and misrepresentative, which ranged from how the representation of Africans reinforces negative stereotypes to the exoticizing of Islam in the Hall of Islam exhibit,” reports The Guardian. If this isn’t sheer insanity, I don’t know what it is. These are useful idiots carrying out a communist agenda and it is now unfolding for real.

The protesters failed in taking down the statue of Teddy Roosevelt. This time because police officers stood in their way. 25 cops ringed the statue and protected it. Frankly, I expect the shooting of communists to commence at some point here. It’s either that or let them have their way. And as I said before they are far from done. According to tweets sent by Chicago’s chapter of Black Lives Matter, the United States should ban all Confederate symbols. And they surely won’t stop there. By letting communists do this, America has opened the door to violent revolution that will either have to be put down brutally or be succumbed to.

BLM wrote in a series of tweets, “The fact that the Confederate flag & statues permeate the south is evidence that white supremacy was never overthrown in the United States.” Comparing Confederate symbols and monuments to Germany’s ban on all Nazi-related propaganda, the group added, “After WWII, Germany outlawed the Nazis, their symbols, salutes & their flags. All confederate flags & statue, & groups should be illegal. The KKK & all other white supremacist groups should be illegal for the same reason Germany made them illegal—for crimes against humanity,” the group wrote. “The murder of Heather Heyer reveals white supremacists value no life, even white life. We must end white supremacy in the United States.” No, what this is the same as is the Nazis burning books. There are now fascists and communists everywhere you look. Welcome to Weimar America.