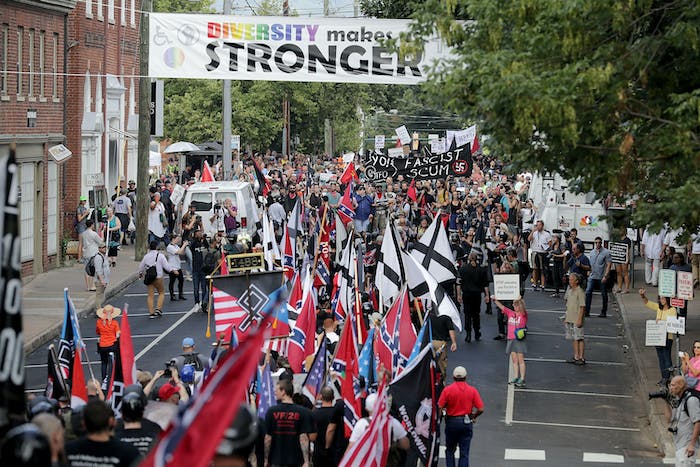 “White supremacists and neo-Nazis meet on East Market Street, and their group runs into anti-fascist demonstrators.” via inverse.com

The reportage of recent events in Charlottesville were grossly misrepresented by the so-called “mainstream media.” It reported this as having been a gathering of “White Supremacists” and “Ku Klux Klan” marchers, who were righteously confronted by “counter-protestors.”  Actually it was an intramural skirmish between competing Progressive groups.

In a journalistic environment of fake news, prudence dictates partaking of “mainstream media” reports with an appetizer of skepticism.  Charlottesville being a case in point, as its become obvious that the Progressive media and its Democrat brethren are and were anxious to associate President Trump (and Conservatives generally) with the retrograde figures of White Supremacists and the KKK.

Had the Progressive media reported with honesty and historical context, they would have conveyed something along the lines of: “Hey, those KKK types may be retrogrades, but they’re our retrogrades!”  And were they completely above board, they would also have reported that the “Antifa” and “Black Lives Matter” “counter-protestors” are: “Likewise our retrogrades!”

Dear reader, at this point you may well be saying to yourself: “That’s crazy.  They hate each other.  They are on opposite sides, and fighting with each other.  What the heck is this guy talking about?”

The “White Supremacists” at the Charlottesville march are the direct descendants of the pre-WWII Progressive movement (henceforth we’ll refer to them as “Classic Progressives”).  Up until WWII, Progressivism and Fascism were political twins – perhaps not identical twins, but twins.  Both were overtly racist, embracing eugenics and its concepts of superior races.  Both pursued concordant race-based population reduction: from Progressives we saw Planned Parenthood and its “Negro Project,” and from Fascists concentration camps.

The first Progressive President, Woodrow Wilson, segregated the formerly integrated federal government. Progressives of that era (and ever since) have lauded large, dominant and domineering central government, a model diametrically opposed by our Constitution. Yet the second Progressive President, FDR, erected an ever more powerful “state” through his “New Deal” – much to the approval of Fascist leader Mussolini in Italy. Indeed, we all know how Fascists view government power and scope.  So overall, FDR and the Fascists of his era were essentially sharing Collectivist “best practices.”

Unfortunately, from the standpoint of the Classic Progressive leaders, the end of WWII exposure of the National Socialists’ concentration camps forced eugenics out of fashion, at least in polite company. However, Collectivists of all stripes, including those of the Progressive branch, never lost their ardor for achieving an all-powerful global government, administered by an elite of superior human beings, lording over the inferior masses beneath.  For their own good, of course.  Even if they are too stupid to appreciate what their betters were doing for them – but then again, what else can you expect from “deplorables”?

So for the Progressive leaders, how to continue the mission, now that open eugenics was off of the table?  Strategic salvation came in the form of what today is referred to as “Cultural Marxism” – the purposeful and anarchistic deconstruction of Western culture and norms, executed so as to pave the way to build a secular utopia upon the societal rubble.  Its originators and proponents included Antonio Gramsci, the Communist theorist from Italy; Germans like Herbert Marcuse and Theodor Adorno (of the “Frankfurt School” that eventually set up shop at Columbia University); and “American” Saul Alinsky of “Rules for Radicals” notoriety. (Yes, Progressivism is a branch of Collectivism, which is international in scope and menace.)

The post-WWII Progressives – henceforth we’ll refer to them as “Neo-Progressives” – knew a good thing when they saw it, and have run with Cultural Marxism ever since.  In doing so, they’ve shifted Progressivism’s emphasis from “White” racism to a sort of “egalitarian racism.”  That is, Progressives now pretend to believe that all races are “equal,” and that they are the champions of the “minority” and “underprivileged” races – Blacks and the so-called Hispanics “race” in particular.  (It deserves mention that Progressives’ “advocacy” for ever-multiplying categories of gender and sexual proclivities is also part of its Cultural Marxism strategy.)  Neo-Progressivism is egalitarian in the sense that any “race” but “White” is welcomed aboard, so long as it will be useful toward advancing the agenda.

Note that both the Classic Progressives and Neo-Progressives always have, and always will categorize people by group, particularly by race; and do so in a manner diametrically opposed to our founding principles, i.e., “all men are created equal, endowed by their Creator…”  The Neo-Progressive leadership – still to this day almost exclusively comprised of elite-class Whites – for public purposes portrays “Whites” as the privileged boogeyman.

Thus, Neo-Progressives appear to embrace the opposite of the “White Supremacy” that their Classical Progressive forefathers embraced.  Yet all the while all Progressive leaders have embraced and pursued the same ultimate goal – that of a global, Godless utopia governed by a ruling elite of the “best and brightest” (i.e., them).  While the White Supremacist “means to the ends” may have been flipped on its head – at least for public consumption – the ultimate goal has remained unaltered.  Judging people by the color of their skin rather than the content of their individual character – and encouraging useful idiots to do likewise – and herding them into proverbial Collectivist cattle cars of the victimhood train, is politically useful for Neo-Progressives.

“Antifa” and “Black Lives Matter” are Neo-Progressive cadres; while the KKK types are Classical Progressive cadres (note that the KKK started as an arm of the Democrat Party, in many respects the Reconstruction era’s “Antifa”).  The battles between them that we just witnessed in Charlottesville are not unlike what occurred in the 1930’s – two forms of Collectivism duking it out for dominance as the form that rules – only today it’s an intramural squabble between two forms of Progressivism.  Back in the 1930’s it was Fascism vs. Communism duking it out – in Germany and Italy Fascism controlled through WWII, while Communism prevailed in the USSR.  After WWII, Communism (and its adolescent sibling, Socialism) prevailed in the USSR, China and much of Europe.  Meanwhile, on this side of the Atlantic, before and after WWII, Progressivism continued its incremental but determined “fundamental transformation” advance through the United States of America.

Today’s street-level Neo-Progressives believe that they are “fighting” to achieve “social justice,” while street-level Classic Progressives believe that they are “fighting” to achieve “White Supremacy.”  Both cadres are useful idiots, unwittingly in service of their Progressive overlords, who are manipulating them to inflame and irreparably divide our country.  Seeking to wrench us from e pluribus unum – and ultimately intending to achieve the Cultural Marxists’ dream of societal deconstruction.

After which, the street-level folks will be encouraged to lock-arms in solidarity, as they become indistinguishable equals, human widgets within Progressivism’s proletariat under the new global order.

Mr. Wigand is the author of the book “Communiqués From the Vast Right-Wing Conspiracy,” which is available on Amazon in both print and Kindle versions: Comments or questions for him may be sent to: [email protected] — he will make every effort to personally respond to every email (except for spam or trolls).

#Antifa are so Proud of their Membership they Cover their Faces like the KKK. No Wonder the Democrats Support Them. Dems Formed KKK. pic.twitter.com/zpRXEbuPiZ

This is #Antifa. This is the #AltLeft. This is #DemocratViolence. This is hatred at its most vile. #BlueLivesMatter pic.twitter.com/AKWfunpjT5 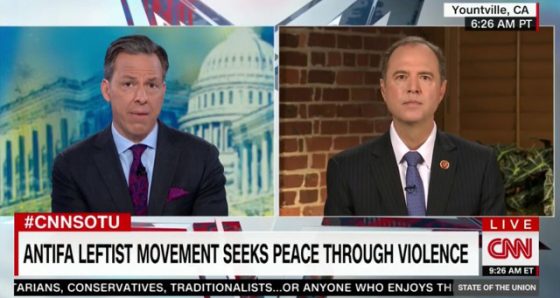 Does the new Alt-left ANTIFA flag remind you of anything? #Nazis pic.twitter.com/rIpwuAJYkn

Antifa Protester Yvette Felarca Says Violence Against The Far-Right Is ‘Not A Crime’ https://t.co/Suct04T9vR pic.twitter.com/EF7O8tyLMw

‘Stupid black b*tch! Supposed to be on our side!’ AntiFa attacks black officer during Boston protest https://t.co/KW687ICtxv

What hasn't been reported much? Miller used the same logic that Antifa does to justify his murders. pic.twitter.com/f1MQLoynYZ

Ignoring Antifa is caving to the Left’s demands. Do NOT fall for the TRAP!
…https://t.co/cgEvrcc7hR pic.twitter.com/XUNAiexS4x

As someone observed earlier today, the Democrat-Communists are really tough on fascists, unless you put “Islamo-” in front of the word.