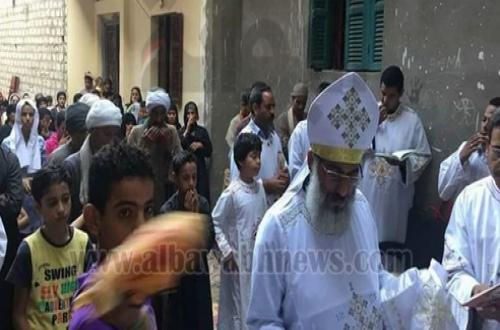 Imagine walking through your village to church to pray during the final days of fasting for the Feast of Assumption. You find police barricades blocking all roads to the sanctuary. At a check point you see your priest petitioning the heavens. State police forbid your entrance and give the same reasons they always do – excuses well known to Christian Copts. You have no permit to pray and you must stop irritating Muslims with whom you share your village.

You are accustomed to it. You’ve always been told on the slightest whim that you need a government permit to pray in the church and even inside your home in the village of Al-Furn, and that goes for all other towns across Egypt. Yet no actual law or code exists requiring anyone anywhere in Egypt to have a permit for prayer. Meanwhile, Christians in this little town of four hundred Coptic families live with the familiar weekly scene of neighboring Muslims praying in the street — blocking public transportation and ceasing passage. Complaints are never lodged against them demanding the nebulous “permit.” They are free to do so.

It is not the only village to be targeted by the Sisi regime’s state police in the Upper Egypt area of the country which is heavily inhabited by Christian Copts. There was Ezbet Nakhla in Abu Qarqas, Qum Al-Loufi village in Basmalut and Taft Al-Kharsa at Al-Fashn Center in Beni Suef.  All received their share of obstruction to worship. Furthermore, when police take illegal actions to harass Christians and halt worship, Copts begin to fear it gives license to Muslim mobs.

In the case of the Virgin Mary Church, it is known that Muslim intolerance was not the motivation behind the police barricade even though so often their complaints cause such responses from law enforcement. Virgin Mary’s priest, Botrus Aziz, claimed that local Muslims said nothing this time and gave no objections to the planned celebrations for the end of the fast on Sunday, August 20.

The regime maintains the police were sent to protect Christians in religious practice from possible terror attacks.

However, two days later when the congregation gathered in the street, law enforcement disappeared. Men, women and children of the Virgin Mary Church, having no other recourse, entered the street on the eve of the Feast to celebrate mass. Christians were left wide open and vulnerable. Apparently the police were no longer concerned with potential infiltrators.

It is speculated that the state may have been retaliating against Bishop Makarius and his courageous remarks to the public two weeks earlier about the status of religious discrimination in Al Minya Diocese. He correctly stated that 15 more church doors are bolted, and 70 villages are not permitted to have a church at all. It seems that Virgin Mary Church may have been next on the hit list for the steady shut down of churches, a total of 58 so far that are inaccessible to Copts due to the regime’s concern for “security.”

With this in mind, some believe that the police barricade of the Virgin Mary Church was the state’s attempt to create a “vacancy” status for the church building. If so, the Church would not succeed in meeting the “grandfather” requirement of sound construction by deadline at the end of September in compliance with the state’s new Law 80-2016 (9/28/2016) governing church buildings. Virgin Mary Church could then be legally and permanently shut down by the state.

In the regime’s zeal for “protecting” Christians the state has expanded its harassment by demanding burdensome paperwork from the church. The church must submit a report in advance to state security with date, time and place of religious activities, listing its participants. After the bus attack and murder of Coptic Christians earlier this year by Egyptian Islamic-jihadists crossing Libyan borders Egypt is clamping down on Christian religious trips and conferences and requiring details upfront for security reasons. In addition to these controls, the previous terror attack brought about the closing of the Coptic Monastery to any future visitors, ending a long religious tradition.

One can’t help but feel that jihadists are winning here. State regulations and errant police follow through with controls over the jihadi targets to strip Christian Copts of religious freedoms. That’s one of the aims of terrorism. Already there are 58 churches inaccessible to parishioners due to the state’s requirements for security.

It is unconstitutional in Egypt for law enforcement to construct a barricade of churches and prayer on any basis other than intelligence of a planted bomb or other form of terror attack. Clearly, the latter was not the case in Al-Furn. Copts have decided not to accept the “irritating Muslims” excuse and the baseless “permit required” reason from the police. They have responded to this incident by petitioning President Al-Sisi, the prime minister, and the local governor, forcing them to confront the injustice. The petition signed by forty-four Christians from the village states,

“Are we required to stand on trial on the charges of praying after police officers insulted our dignity? On the morning of August 20, we were subjected to insults, and we were prevented from praying and performing religious services as usual. We were surprised by the presence of police forces in the village to prevent us from reaching our church. Furthermore, they later prevented us from leaving our homes. After our meeting we found that we were incriminated as criminals or outlaws.”

Despite hard evidence of the state’s guilt of harassment and discrimination using both legal and illegal means, Copts remain hopeful and convinced that Sisi is their champion bringing about the right change slowly. Impressions frozen in time on the day the military head consented to be the people’s man enable Copts to remain confident in Sisi doing what he promised. Copts trust the president.

From the onset of his political career, Sisi promised equality and freedom of worship. Viewing government through relativism — comparing Sisi to former President Morsi and the dreaded Muslim Brotherhood — blinds Christian Copts to Sisi’s record which is scant improvement, if any, over the Mubarak dictatorship.

Equities rebounded from early morning losses sparked by North Korea firing a missile over Japan. Treasuries retraced some of their gains. To write the obvious, North Korea’s potential outcomes are infinite.

Radically changing topics consumer confidence is at the second highest level since 2000. The labor differential, or the gauge measuring those saying jobs are plentiful minus share saying jobs are hard to get, widened to 18.1 points, the most since July 2001, up from 14.5 the prior month. Share of households who expect incomes to rise in the next month increased to 20.9% in August, up from 20% in July, also a multi-decade high.

Wow! This data is incredible given the incredible vitriol in today’s society.

Today is the first revision of second quarter GDP. Analysts are expecting a slight decline to a 2.6% rate versus the previously reported 2.7% pace, the result of inventory destocking. How will this data influence economic forecasts?

The Dow should open flat as Korean concerns are dissipating. Euro confidence rose to the highest level in a decade. The 10-year is off 3/32 to yield 2.14%.