Unite the Right promotional poster as tweeted out by Baked Alaska

Are the leaders of the infamous “Unite the Right” rally held in Charlottesville, VA on August 12 “white supremacists” or something else? Heather Heyer was brutally killed and many others wounded when a car being driven by James Alex Fields, Jr., a Hitler-loving 20-year-old diagnosed schizophrenic plowed into a group of communist agitators and Antifa activists.

Whether they are provocateurs, infiltrators or nazis, one thing is for sure – the leaders of the Unite the Right rally do not preach, practice or even remotely represent conservatism.

But the Unite the Right leaders researched by this author do share several common traits: They are anti-Semitic, deeply pro-Russian, and have an anti-free market ideology.

David Duke is not exactly a conservative icon. He is anti-Semitic and would be more ideologically compatible with the Boycott, Divestment, Sanctions (BDS) movement than with the pro-Israel Tea Party. In fact, David Duke praised the Occupy Wall Street movement, particularly the anti-Semitic strain therein, including head OWS organizer Adbusters editor Kalle Lasn.

Like the others profiled here, David Duke has a deep appreciation for Russia, and even lived there for a period:

I lived in Russia for five years. While there, my book Jewish Supremacism was a best seller and sold in the Duma book store. https://t.co/loug9EdnSy

And david Duke and the klan are on the side of Russia, where’s that list of people trump won’t attack again? White supremacists and putin.. pic.twitter.com/4Nricps1N7

A revealing quote from Aleksandr Dugin’s 1997 work “The Foundation of Geopolitics:”

Learn more on Dugin from the Center for Security Policy.

END_OF_DOCUMENT_TOKEN_TO_BE_REPLACED 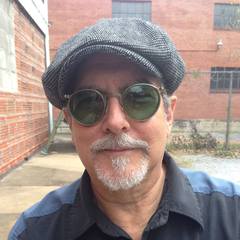 Bernard Sampson is chairman of the Houston Club of the Communist Party USA. As a young man he was active in the Trotskyist Spartacist League in Los Angeles.

In recent years, Sampson has been active in the NAACP, Working America, People Before Profits, Houstonians for Bernie Sanders and The Houston Socialist Reading Group.

He also serves as a Precinct Chair for the local Democratic Party.

Bernard Sampson also serves on the board of Coalition of Community Organizations, which is led by his friend and fellow Communist Party USA supporter Rev. James Caldwell, one of two black pastors involved with the Houston Communist Party. 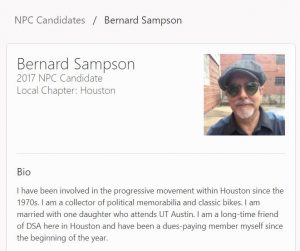 I have been involved in the progressive movement within Houston since the 1970s… I am a long-time friend of DSA here in Houston and have been a dues-paying member myself since the beginning of the year.

I am heavily involved with DSA and would like to help the Houston chapter establish meaningful relationships with other progressive organizations in the area. I have ties to Working America, Texas Organizing Project, Communist Party USA, Houstonians for Bernie Sanders (I played an active role in Bernie’s campaign throughout the process), as well as many of the unions within the Houston area.

Bernard Sampson failed to win election to DSA’s leadership body, but remains active in the organization. —