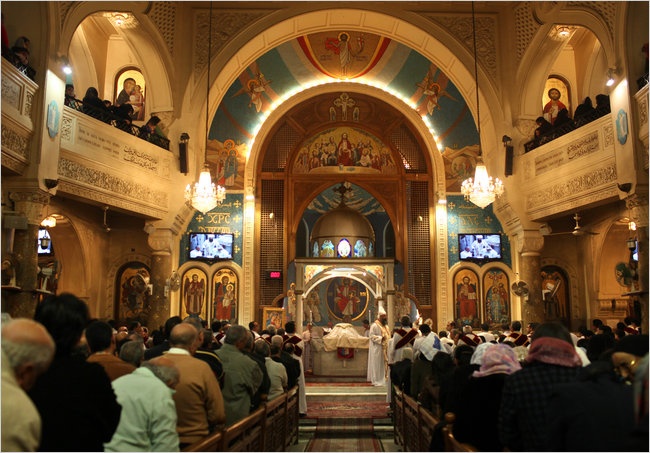 On Sunday, September 10, two Coptic churches were re-opened by an executive order made by President Al-Sisi. One of them was the St. Mary Church of Al-Furn village in Al Minya diocese, which was illegally shut down by Egyptian police recently in the final days of the Virgin Mary fast.

Bishop Makariuos of Al Minya diocese issued a statement to announce this good news. He indicated that Al-Sisi issued an executive order to local law enforcement to re-open the two churches on the eve of the new Coptic year.

The bishop further added that Copts of Al Minya and Abu Kurkas are thankful to the Egyptian president for his response and the attention given to their petition concerning the shutting down of their churches.

Their gratitude goes to the Interior Minister, the Governor of Al Minya and the head of Al Minya security as well as the National Security Service.

The bishop’s statement did not ignore that Muslim residents of the town seemed grateful for the re-openings. Muslim villagers had been used as scapegoats by police authorities for the closings. Concerning the latter, a Voice of the Copts’ member emphasized that many Muslims came to the church to congratulate the priest and congregation. A celebration entailed almost three hundred Christians in the first mass and took place with great joy and tears of happiness.

The Al Ahzar Grand Imam visited Germany, and Al-Sisi met in Cairo with the United States delegation of Anglican Churches – two events that took place within hours of the order given to re-open the churches. The re-openings could be seen as timed to serve the purpose of “substantiating” messaging.

In the same time frame, the executive level meetings immediately followed the order to re-open the churches. Therefore, the matter is subject to speculation. The future will tell. If this proves to be the beginning of more re-openings to come then we know this gesture by the Al-Sisi government is meant to be consistent with Article 46 of the Egyptian Constitution, which permits freedom of worship.

Why now and why only two churches when so many need to re-open?

Al Tayeb, the Grand Imam of Al-Azhar Institute, was invited to participate in the Roads of Peace International Conference where he delivered a speech on Sunday, September 10. In his speech, the Imam condemned the recent aggression against Muslims in Myanmar ignoring the “plank in his own eye” regarding the plight of Coptic Christians his own country. Perhaps he thought he had a right to do so because of the church re-openings in Egypt preempting his critics.

At the same time in Cairo, President Al-Sisi met with a delegation from the National Council of American Churches. The meeting’s agenda was about how to confront extremist thinking and terrorism. During that meeting, Al-Sisi confirmed that Egypt will uphold the concept of citizenship and consolidate the culture of pluralism (the acceptance of others). He further confirmed the absence of discrimination in Egypt on the basis of religion and that all citizens enjoy the same rights and all the same duties to the homeland – after all, “Egypt’s churches were now being re-opened.”

Voice of the Copts joins in the celebration with gratitude

Christian Copts are truly grateful for the return of two church properties no matter what the motive. It is not new that Coptic issues are exploited for political purposes.

If the Egyptian president is sincere in his talk to the American delegation, then we should expect to see an effort to restore more churches in the near future. This would include re-opening and returning all the remaining closed churches and reconstructing churches destroyed by terror attacks. The latter would benefit by a new law for the construction of all worship buildings with equality in mind.

The right to practice your faith is granted by the Egyptian constitution, and we at VOTC join Bishop Makarious and the Copts of Al Minya and Abu Kurkas in their joy and happiness!

We thank the Egyptian authorities for re-opening churches that were illegally closed down. We hope that more executive orders to restore remaining churches will be made sooner than later.