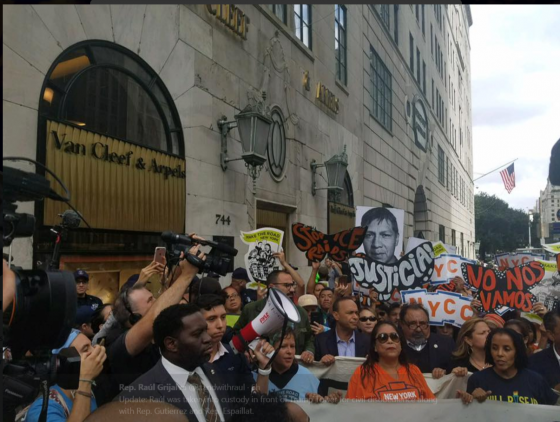 Reps. Luis Gutierrez (D-IL) and Raul Grijalva (D-AZ) were arrested today sitting in the street outside of Trump Tower in Manhattan. Rep. Adriano Espaillat (D-NY) was also taken into custody. All three are die-hard Marxists and as racist as they come. They were busted for civil disobedience.

Why would Democratic Congressmen make fools of themselves like this? Because of the Deferred Action for Childhood Arrivals that was brought into being unconstitutionally by Barack Obama. Which is just hysterical because as far as I can tell and as much as I hate to say it, it looks like President Trump is in favor of cementing DACA. He discontinued it with a six-month rider, telling Congress to fix it, not do away with it. Unless of course, they are demanding all 11 million illegal aliens get to stay and are granted Amnesty. That’s what the Democrats really want. That and chain migration.

Reps. Raul Grijalva and Luis Guittierrez have also been arrested.

A number of members of Congress were present for the protest. As I understand it, others were arrested as well. Police also arrested New York City Council Speaker Melissa Mark-Viverito. A spokesman for Gutierrez’ office confirmed his arrest. Grijalva’s would not return comment on the matter. This protest comes as President Trump was addressing the General Assembly of the United Nations. He was warning them about the threat of North Korea and that the US would take them out if we have to. I hope that is true.

The rally was promoted as being by “immigrants rights activists” and members of Congress. In other words, Mexican nationalists, radical revolutionaries and communists. Gutierrez made a statement: “We’re taking the necessary steps to make it clear to President Trump, the Republicans and the Democrats that we will continue this peaceful fight for DREAMers and immigrants as long as it takes to enact legislation and put DREAMers in a safe place. A few congressmen and elected-officials gathering in front of Trump Tower doesn’t mean much if it is not backed up by the grassroots and allies and today we are standing with diverse allies to make sure Congress and the President do more than just talk about solutions, they actually follow through with action.”

Update: Raúl was taken into custody in front of Trump Tower for civil disobedience along with Rep. Gutierrez and Rep. Espaillat. pic.twitter.com/Mrh60C9aTT

“We are here to defend our immigrant communities,” Mark-Viverito said before they were arrested. She was then put in plastic handcuffs and loaded into a Department of Correction bus with other protesters. “We don’t want families to be divided,” she said. “Trump’s policy goes against what the majority of this nation supports and believes in. It goes against our values.”

Advocacy groups including United for Fair Housing, Make the Road New York, New York Communities for Change, Fair Immigration Reform Movement (FIRM) and Make the Road New Jersey were in attendance at the rally as well. It was well-organized. Aren’t they all? However, only ten people sat down in front of Trump Tower. All were arrested… all were Democrats. Four of them were well known politicians. They called on Congress to pass the DREAM Act — which would offer legal status to people brought to the United States illegally as children — without the added border security expected to be included in a deal between Trump and Congressional Democrats.

“They deserve to stay in America. They are workers, students, soldiers in our armed forces,” Espaillat said. Democrats get arrested rather frequently for publicity. It’s the communist way. Bill de Blasio did it while running for mayor in New York to protest the closure of Long Island College Hospital, which ended up closing after he took office. Natalia Aristizabal of the group Make the Road New York said Congress should not offer the extra cash for border security that Democratic leaders have agreed to in exchange for shielding the young immigrants. “We do not want enforcement. We do not want to put the broader immigrant community in jeopardy,” she said. In other words, screw the rule of law.

“Since you have refused to leave the roadway, you will be placed under arrest on the charge of disorderly conduct,” said an NYPD loudspeaker announcement before the group was arrested. Grijalva said “all acts of pressure are appropriate right now” in defense of the thousands of immigrants, commonly referred to as DREAMers. That’s a call for violence in the streets by the way. It’s a rallying cry for revolution. 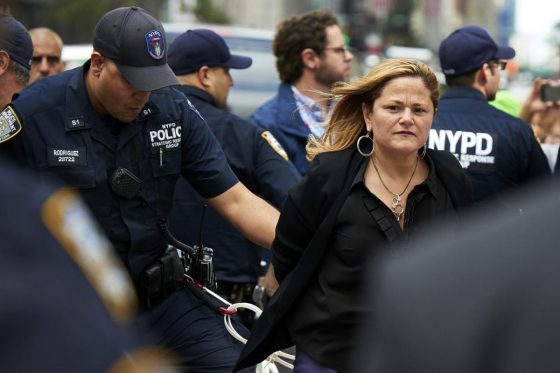 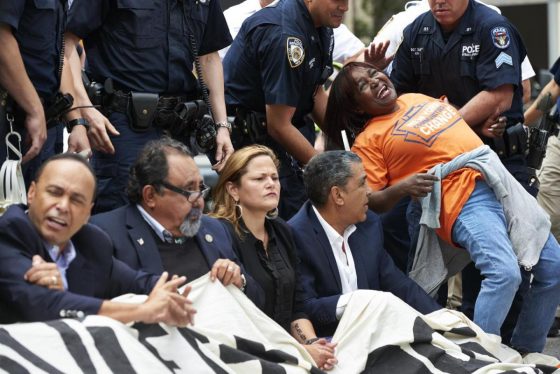