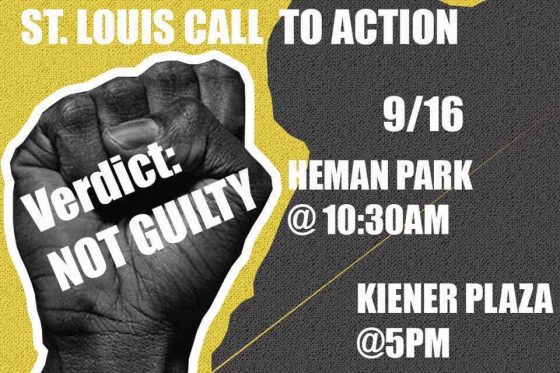 I wish I could say I was shocked by this, but sadly I’m not. It turns out that the St. Louis Young Democrats are collaborating with Black Lives Matter to instigate protests and riots in the city. At approximately noon yesterday, the Young Democrats tweeted that the next “protest” in response to the not-guilty verdict in the Jason Stockley trial was planned for Wednesday evening. They told rioters where and when to show up. They hashtagged it #blacklivesmatter on the tweet.

Of course, both groups are claiming that they are calling for peaceful protests. Funny how it never works out that way though. Black Lives Matter is a domestic terror group and they aren’t very concerned with staying peaceful. They are much better known for smashing storefronts, setting cars on fire, spraying chemicals, throwing rocks and projectiles at police and beating people up. We’ve had six nights of violence in St. Louis. A dozen police officers have been injured and thousands of dollars of damage has been committed against local businesses. Now, we find out that the Young Democrats are in the thick of it, which isn’t surprising since they are communists.

The next protest in response to the #STLVerdict is scheduled to begin at 5:00 pm at Shaw Park tonight, Wednesday 9/20. #blacklivesmatter pic.twitter.com/CQJPfbvUr2

All of these thugs are protesting the shooting death of Anthony Lamar Smith by Officer Jason Stockley. Smith had been convicted of dealing drugs and was on parole. Smith was involved in a high-speed chase with Stockley in 2011. Heroin was found in Smith’s car. Stockley wound up shooting Smith in the altercation. The officer was acquitted of murder charges on September 15th and here we are. If you are known by the company you keep, then the Young Democrats are radical, violent, militant activists who want to get their violence on with cops.

The mayor has also been justifying the violence in her public statements. That only invites more of this. Democrat Mayor Lyda Krewson was elected to her first term in April. Before that she served on the St. Louis City Council for 20 years. You remember Krewson… she sat in her car drinking coffee as they took down Confederate statues in the dark of night. As a councilwoman, she championed laws banning concealed carry of handguns and smoking in the city.

C'mon Mayor! How bout you actually let the police force do their job and arrest anyone blocking a street? #protestlivesscatter

The Rev. Jesse Lee Peterson had this to say about Krewson, “Instead of encouraging the police to arrest these people and put them under the jailhouse, she is justifying the anger and destruction these people are causing and to think these protesters are destroying people’s property over a drug dealer, who was out on parole and was caught trying to sell drugs and had rammed his vehicle into police and he ended up dead. So instead of telling the black community that this is not what you want your children to grow up and be like, they are encouraging more of the same thuggish behavior,” Peterson said. “This is vile, and it’s out of control. There is another agenda going on, and it’s not about black lives.” He’s got that right. It’s about tearing it all down and causing mayhem and chaos in the streets of America. It’s what communists do.

Krewson had her home spray painted and a window smashed by a brick thrown by these thugs. Yet, she defends them more than the police or the people of St. Louis. It turns out that the Young Democrats have been working with Black Lives Matter on these riots since the first night they happened. Last night, the organization tweeted that a scheduled town-hall meeting by Mayor Krewson had been canceled because, as the mayor stated, the town halls “are happening in the streets. We are listening.” She’s listening to the wrong side here. Typical Marxist.

We urge all Young Dems to get educated and take action in response to the Stockley verdict. Our statement: https://t.co/9NCb1WTlz1

In fact, the mayor issued a two-page statement where she said that while violence will not be tolerated, she is “listening” to the protesters and their demands. Hey mayor… can you hear them now? Wait until they set the city on fire, maybe then she’ll really listen. She sees the problem as being not just the Stockley case or the police themselves, but years of what she is calling “institutional racism.” The “root cause” of the city’s racial angst is “a legacy of policies that disproportionately impact people along racial and economic lines. … This is institutional racism,” she said. Spare us… she knows that is bull feces. She says that St. Louis has a chance to ‘lead the way’ in providing more equitable police service. She’s going to lead them alright… right off a cliff. And St. Louis is already leading the nation in riots and unrest. Great job mayor!

She finally ended off by stating that her administration is providing more equitable police service. It looks to me as if the good mayor is condemning violence on one hand and condoning it with the other. She’s feckless and weak. She has no business being mayor. This has to do with a void of moral character more than institutional racism. And the mayor is fomenting the situation. It seems to me the racists are Black Lives Matter and the Young Democrats, not their victims and not the police. No one is confronting the evil in the streets of St. Louis. That’s what needs to happen here and in cities across the US. If America wants to survive that is. And we need to call these people out as militant racists and communists. If you can’t name the enemy, you can’t fight them, much less defeat them.

The next protest in response to the #StockleyVerdict is scheduled to begin at 7:00 pm at Euclid and Maryland. #blacklivesmatter

The next protest in response to the #StockleyVerdict is scheduled to begin at 10:00 am at Market & Tucker. #blacklivesmatter

After much consideration, postponing our Town Halls for this week because right now they are happening in the streets. We are listening. pic.twitter.com/VeCBOdXL6g

The S & P is stuck in one of the tightest trading ranges in history as all attention is now on the endless commentary on reducing the Fed’s balance sheet. Oil is almost at $51 barrel, the highest level in about five months as OPEC is in 116% of compliance of production cuts. Inventories are declining faster than expected as demand is accelerating because of greater than anticipated global growth.

Speaking of the Fed, the Committee’s forecast calls for inflation to remain under 2% for the next 12 months. I ask if oil rises to $55-$60 barrel, will the Fed maintain this forecast? The FOMC intends to increase rates one more time in 2017 and three times in 2018.

If the Committee takes this path, the overnight rate will be yielding more than the yield on today’s 10-year Treasury and close to the current 30-year Treasury yield.

The FOMC also announced its intentions to begin reducing the size of its balance sheet next month in a gradual but consistent manner. What will QT be met?

As noted many times, the consistency from 2010-2015 that was projected for Fed policy did not unfold. In January, I opined about the odds of expected Fed policy again not materializing, defined this time as greater than expected rates because of stronger than anticipated growth.

Yesterday, it was reiterated for the first time since 2007 that all 45 OECD countries — the 45 largest countries in the world — are expecting their economies to expand in 2017, an expansion lasting into 2018. This is a rarity. Such contiguous expansions last occurred in 2007. Before that was in the late 1980s and before that was 1973.

Equities were mixed on the news. Treasuries were essentially unchanged.

The Dow should open nervously lower as many are questioning the valuations of the market leaders in a potentially higher rate environment and the impact of QT. The 10-year is off 2/32 to yield 2.28%.