It’s finally here. They wouldn’t let us launch this documentary at Berkeley, but you can see it right here for free, courtesy of the Capital Research Center.

As you may know, social media is not kind to conservatives. It would help us greatly if you could “upvote” the film on YouTube and also “upvote” comments that you like on the film. If you feel the movie is worthy, please also leave a comment.

NoisyRoom Commentary: This documentary is simply the best I have seen out there that explains Antifa and its roots. Trevor Loudon has done a fantastic job uncovering the history and motives of this violent, radical movement. I highly recommend you watch it and pass it around everywhere you can. In this documentary, you will see that Antifa is in fact communist and they are now all over the planet. This is the true enemy within and we must not let them succeed.

Whenever I hear about NFL players taking a knee during the national anthem, I am reminded of the double amputees that have returned from America’s wars. And the fact that while, because of our Armed Services’ sacrifice over centuries, we are entitled to speak freely, but none of us are entitled to do so in a particular forum.

NFL players are employees of a larger organization, just like Curt Schilling was when ESPN fired him for what he thought was protected speech. The speech is protected. Your access to a particular forum is not. They are teammates in a sport that pays these allegedly oppressed spoiled brats millions. Their teammates may share a different view, so does the locker room become a game prep area or a debating society? Does the field remain a porting arena or a campaign rally? Those who take a knee were indeed given that right by many who no longer have knees and are privileged to take a knee in a sport paid for by millions of fans who may disagree with them and who paid to see a game, not a protest. Players who take a knee think they are being patriotic, when they are merely being elf-indulgent and selfish. Go rent out a stadium and invite people to pay just to see you take a knee and see if anybody shows up. The response by the MFL Players Association is disingenuous, at best:

The NFL Players Association, the labor union representing the players, responded to Trump in a statement on Saturday. Here’s an excerpt of the statement:

“The peaceful demonstrations by some of our players have generated a wide array of responses. Those opinions are protected speech and a freedom that has been paid for by the sacrifice of men and women throughout history. This expression of speech has generated thoughtful discussions in our locker rooms and in board rooms. However, the line that marks the balance between the rights of every citizen in our great country gets crossed when someone is told to just ‘shut up and play.'” 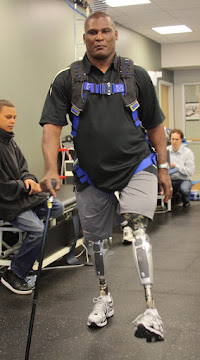 Well, shut and play. That’s what people pay you handsomely to do, isn’t it? Although they are getting fewer as NFL ratings drop and outlets like ESPN lose viewers. Why not rename the teams and align ideologically. Tune in Sunday and watch Black Lives Matter line up against Blue Lives Matter? That is why ratings for the Emmys and the Oscars are tanking as people grow weary of working hard to see movies and games only to see self-absorbed and self-righteous millionaires preach to them.

Exercising the freedoms of speech and press that so many have given their last measure of devotion for, Chicago Tribune contributor Diana Goetsch recently penned an op-ed defending disgraced and unemployed former NFL quarterback Colin  Kaepernick and his infamous taking the knee during the national anthem. Not stopping there, Goetsch goes on to slam the national anthem as a “pompous battle number” that wasn’t played before sporting events until 1942 in the dark days of World War II.

One wonders if the likes of Kaepernick and Goetsch have pondered the possibility that were it not for the sacrifice of veterans during World War II she just might be plying her trade writing her tirades in Japanese or German. Were it not for the fact that the flag  the national anthem celebrates was raised at Iwo Jima and never stopped flying at Bastogne during the Battle of the Bulge.  .

Let us make the obligatory stipulation that  the likes of Kaepernick and Goetsch have the right to express their opinions through their actions and words. But not in a forum paid for by others in both blood and treasure. Men, and women, have died or been maimed for life for their right to be obnoxious and insensitive to the heroic sacrifice of others. AsAaron Bandler writes at the Daily Wire:

“Unlike the magisterial ‘America the Beautiful,’ ‘The Star-Spangled Banner’ is a pompous battle number,” wrote Goetsch. “Spurred by a petition bearing 5 million veterans’ signatures, Congress designated it the national anthem in 1931, but it wasn’t until 1942, and our entry into World War II, that it was played on loudspeakers daily before games.”…

But most importantly, for Goetsch to refer to the anthem as “a pompous battle number” isn’t just appalling, it’s historically inaccurate. Francis Scott Key penned the anthem after witnessing the American flag prevail over Fort McHenry during the War of 1812 when it initially seemed to him as if Britain was going to win the battle.

That’s what our national anthem is all about: even during the country’s darkest moments, America, the beacon of hope and freedom, finds a way to prevail in the end. That’s why everyone stands for the national anthem before sporting events; it’s a reminder that we are lucky to have the freedom to be able to attend such an event and we should honor those who died to preserve that freedom for us.

Goetsch is free to claim Kaepernick lost his job for political or even marketing reasons, although his performance on the field was less than Hall of Fame stuff. The 49ers or any other team are free to hire or fire him for any reason. In a free country, that’s called the free market.

Liberals tend to be selective in defending free speech. Protests against the flag or the national anthem are to be praised, but public affirmation of faith and traditional values are to be mocked, such as fromer Denver Broncos quarterback Tim Tebow’s slightly different taking of the knee and giving of thanx to the Creator from which all our inalienable rights come.. As Investor’s Business Daily editorialized in 2012:

Even before George Washington is said to have taken a knee in prayer at Valley Forge, men and women of faith and courage endowed by their Creator with inalienable rights have guided this nation to greatness.

Some 45 million people watched Denver Broncos quarterback Tim Tebow complete that 80-yard touchdown pass play to Demaryius Thomas on the first play from scrimmage in overtime to lead his team over the Pittsburgh Steelers in Sunday’s wild card playoff game.

They also saw him take a knee and give thanks to the God he believes in, an act that’s been dubbed “Tebow-ing.”…

On the postgame show, CBS analysts “Tebow-ed” in unison, mocking the seriousness of Tebow’s intent. “Saturday Night Live” has done a skit in which Jesus appears in the Bronco locker room. God does not take sides in football games, Tebow’s critics say.

Tebow would agree with that, but he also acknowledges a higher power’s influence on his life, win or lose, just as the Founding Fathers did when they acknowledged in the Declaration of Independence that we were “endowed by our Creator with certain inalienable rights,” rights such as freedom of speech and freedom of, not from, religion.

On April 25, 1976, back when it was not politically incorrect to be a public patriot, Chicago Cub outfielder Rick Monday made what some call the greatest play ever on a baseball field, a play honored 40 years later at a Dodger game in Chavez Ravine:

Rick Monday was honored by throwing out the first pitch at Monday’s game at Chavez Ravine for arguably the greatest save in Dodgers Stadium history.

What, you say, Monday was an outfielder? And why would he be credited with a save?

Forty years ago on April 25, Monday was playing centerfield for the Cubs in a game against the Dodgers.

The game turned from an ordinary early season game into one with high drama when two people suddenly appeared in the outfield at Dodger Stadium.

One had an American flag. The other, lighter fluid and was planning on burning Old Glory. This was an act Monday, who served in the Marine Corps, was not about to let happen.

Monday raced across the field to grab the flag before it could be burned in protest. Via MLB.com from a story on the 30th anniversary of Monday’s swift action, Monday describes the moment in his own words:

When these two guys ran on the field, something wasn’t right. And it wasn’t right from the standpoint that one of them had something cradled under his arm. It turned out to be an American flag. They came from the left-field corner, went past Cardenal to shallow left-center field.

“That’s when I saw the flag. They unfurled it as if it was a picnic blanket. They knelt beside it, not to pay homage but to harm it as one of the guys was pulling out of his pocket somewhere a big can of lighter fluid. He began to douse it.

“What they were doing was wrong then, in 1976. In my mind, it’s wrong now, in 2006. It’s the way I was raised. My thoughts were reinforced with my six years in the Marine Corp Reserves. It was also reinforced by a lot of friends who lost their lives protecting the rights and freedoms that flag represented.

Diana Goetsch and her ilk are free to exercise their freedoms but they are not free to forget where those freedoms came from and who fought and died for them. She’s a grand old flag. Let’s honor her and what the flag represents every chance we get.

NFL Commissioner Roger Goodell whines that President Trump’s rematks about respecting the flag and the national anthem are disrespectful of NFL players:

NFL Commissioner Roger Goodell said Saturday that President Trump’s recent comments about players kneeling during the national anthem are “divisive” and show a “lack of respect” for the pro football league and its players.

“The NFL and our players are at our best when we help create a sense of unity in our country and our culture,” he said in a statement. “Divisive comments like these demonstrate an unfortunate lack of respect for the NFL, our great game and all of our players, and a failure to understand the overwhelming force for good our clubs and players represent in our communities.”

Millionaires taking a knee during the national anthem to protest alleged social injustice does build unity and is not a force for good. It breeds disunity and divisiveness. Look up in the stands, players, and see the diversity and equality of those, including veterans, who came to see you. Shut up and play.

Those who would take a knee to protest the American flag likely have never been handed a folded one. NFL players who want to take a knee should talk to the wounded warriors who no longer can.