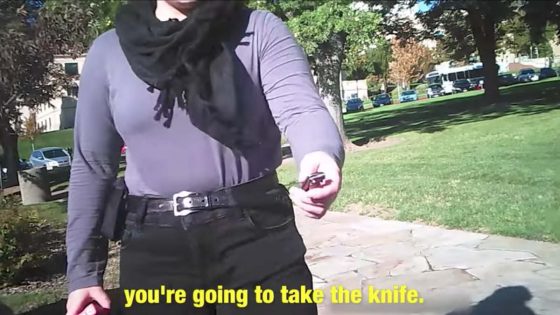 I’m impressed with Steven Crowder and Not-Gay Jared. They have stones… these two infiltrated Antifa at the University of Utah before Ben Shapiro’s speech there. They shared their information with the police, who were grateful for it. Maddeningly, they tried to share it with the media, who wanted no part of it. Figures. Two comedians did what these behemoth media outlets can’t be bothered with… they worked their way into a domestic terrorist outfit and were offered knives and shivs. The members spoke of having guns and killing people. They even discussed luring people back to the parking lot to take them out. I fail to see how that is not news.

Trevor Loudon released his new documentary this week, entitled: America Under Siege: Antifa. Loudon’s documentary is so good and so insightful, that Antifa is threatening him now. That won’t stop Trevor… it never has. It’s below… if you haven’t seen it, watch it. He explains who Antifa is and what their goals are. Antifa is a reincarnation of Black Bloc. They evolved out of the Occupy Wall Street and Anonymous movements. They are not unique to the US. You see them throughout Europe now. They are anarcho-communists and are exceedingly violent. Antifa – or anti-fascists – believe there are two types of fascists. Your run-of-the-mill Nazis and anyone who supports capitalism. In their twisted minds, this justifies violence against most Americans. In progressive cities, those liberals who are in power are ordering the police to stand down so Antifa can get their violence on. Do you really think that is just a coincidence? It’s by design. It’s why the leftist media will not address Antifa at all… they support them.

Leon Trotsky formed the first Antifa-like units. They were armed thugs who suppressed opposition to communism prior to the Bolshevik uprising – Red October. It’s the same old story of the communists versus the fascists, only we are all being branded as fascists now in the communist left’s violent attempt at taking over America. Eventually 55 percent of the Brown-Shirts for Hitler would be former Antifa communist members. They called them Beef Steak Nazis… brown on the outside, red in the center.

Antifa is prevalent across Europe, with a big presence in Germany and Italy. There are towns in Germany called Antifa-towns. People fear them there. If you step out of line, they threaten your family and will come in and destroy your home. It’s not just the radical Islamists that are problematic there, Antifa is terrorizing these people as well.

So, you see, the answer to Steven Crowder’s question, “Are they really an inconsequential group of rabble rousers?”, is a resounding no. Antifa counts among its members many teachers, professors and students. They are being funded by very wealthy people as well. The only reason they get away with calling Ben Shapiro fascist (he’s Jewish), is that he believes in capitalism and constitutional rights. That is why Antifa considers him so dangerous to them. He’s a master debater and gets his message across to others, which Antifa will not tolerate.

Watch both videos and see the threat that Antifa truly is. They are militant and want revolution and chaos in the streets. They aren’t going away and will have to be defeated at some point. These are communists and this is their political agenda. They have been called many names throughout history, but their tactics, hatred and violence are always the same.