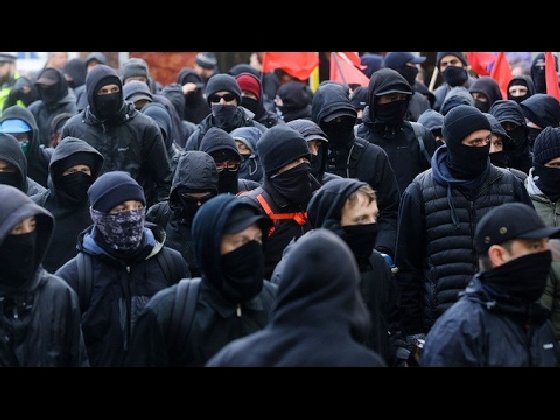 Antifa is possibly strongest here in the US in Berkeley, California. Currently they are threatening and stalking the University of California – Berkeley College Republicans. Antifa considers Nazis fascist, but they also consider anyone who believes in capitalism and the Constitution as fascist. Twisted, but that’s what they believe. Antifa is now listing these Republicans by their names and locations and putting it out on social media to alert other Antifa members that they are in their vicinity. They aren’t specifically calling for violence, but it is clear they are targeting the Republican students.

On Wednesday of this week, the Berkeley Antifa Twitter account put out the private meeting place of several Berkeley College Republicans. They claimed these students had been “drinking with Kyle Chapman and Joey Gibson.” Kyle Chapman is better known as “Based Stick Man.” He is a Trump supporter who physically attacked Antifa members. He rose to fame last March after hitting an Antifa supporter in the head. Joey Gibson is the founder of Patriot Prayers. They are a pro-Trump organization that is active in California and the Pacific Northwest. 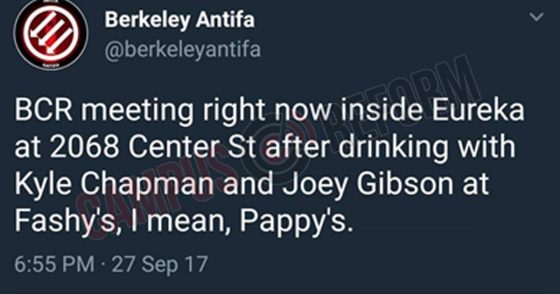 There are a lot of fake Antifa accounts out there. This isn’t one of them. It’s managed by die-hard Antifa members based in Southern California. The account has been known to call for violence against conservative, free-speech advocates and anyone they deem to be “fascists.” Intimidation and violence are the calling card of Antifa. You will see them get more and more aggressive over time just as they have in Europe. They have stalked and intimidated conservatives within and outside of the campus. That particular account has named a number of Berkeley College Republicans, including Troy Worden, Ashton Whitty, Naweed Tahmas, Matt Ronnau and Angelie Castenada.

Last August, Ashton Whitty, who is a student there, was hunted down by Antifa and cornered at a gas station. They beat on her car trying to terrorize her. Whitty was interviewed on Fox News over the incident and they showed footage of the violent encounter. She related to Campus Reform that Antifa members had stalked her. They took pictures of her and tracked down her location to attack her. “It’s rather odd why these people would see us as such a priority when we’re just everyday people,” she said. 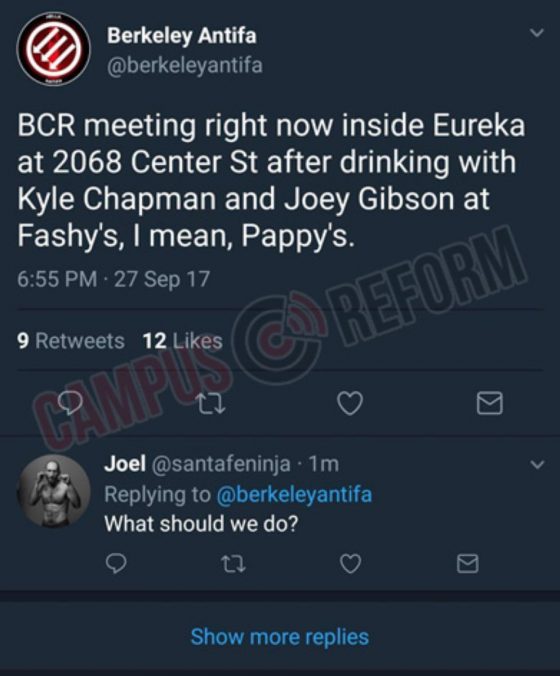 The VP of the Berkeley College Republicans, Nahweed Tahmas, bluntly stated that conservatives at UC Berkeley are “routinely targeted, harassed and stalked” by the anarcho-communist group. “Knowing that they have sympathizers within both the city administration and university administration, leftist groups will continue to target conservatives as they know there are no consequences to their actions,” he said. “It has become socially acceptable in Berkeley to physically beat someone for being a conservative,” Tahmas added. “In fact, it is even encouraged.”

On Tuesday, prominent Antifa leader Yvonne Felarca was arrested following the group’s “Victory March” in the city. Berkeley Police later released a mugshot of the activist, noting that she was arrested for “battery and resisting arrest.” You remember this woman, she is a middle school teacher and a violent Antifa member. In fact, there seem to be quite a few teachers and professors that run with Antifa. 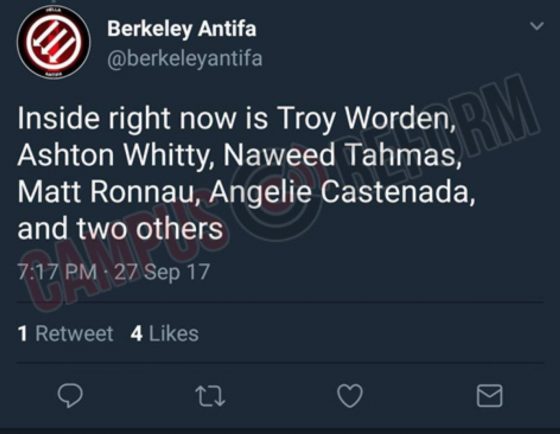 For an in-depth explanation of Antifa and to see just how terrifying this group really is, watch Trevor Loudon’s excellent documentary below: America Under Siege: Antifa. You will see what we are facing and who the real enemy within is.

Antifa is the third episode in the America Under Siege film series from Dangerous Documentaries (a project of the Capital Research Center) and Cohesion Films. Each episode profiles the influence of radical Marxists on various segments of American society.

The communist movement known as Antifa (short for Anti-Fascist Action) has sparked violence across the nation. In the wake of their battling despicable white supremacist in Charlottesville, Antifa has begun to gain mainstream popularity. But unbeknownst to much of the public, the vast majority of Antifa violence isn’t targeted at genuine fascists, but mainstream conservatives and civilians. With help from those who have encountered Antifa, including Milo Yiannopoulos, Gavin McInnes, Lauren Southern, Jack Posobiec, and Steve Deace, conservative author Trevor Loudon guides us through the history and ideas behind the Antifa movement, starting with Leon Trotsky and going all the way through the events in Berkeley, CA and Charlottesville, VA.

The film was written by and stars conservative author Trevor Loudon, directed by Judd Saul, produced by Jake (Joseph) Klein and Victoria Loudon, and executive produced by Capital Research Center’s Scott Walter and Matthew Vadum. You can view previous episodes of America Under Siege at DangerousDocumentaries.com. 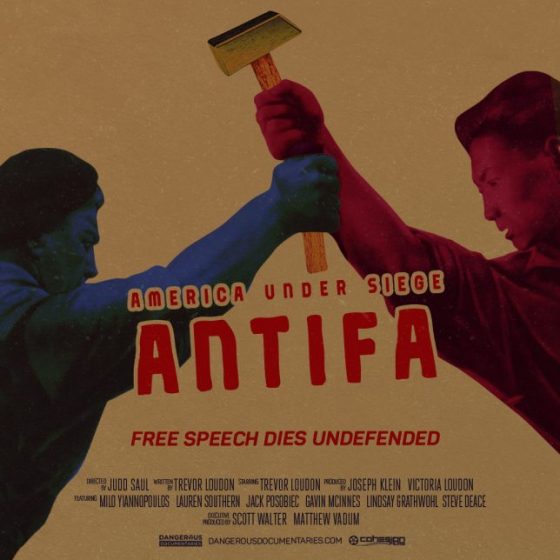