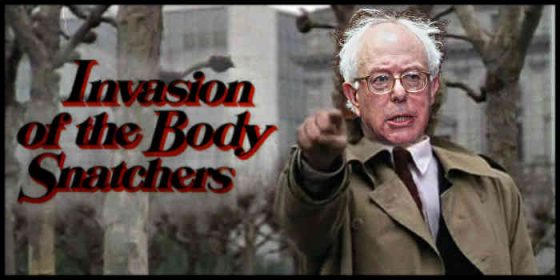 My biggest frustration is seeing conservative/Christian family members and friends overtaken by liberalism. I think it happens when they’re alone in the dark sleeping. Liberalism takes over their body like in that movie, “Invasion of the Body Snatchers.” One morning they awake saying, “The second amendment is outdated. Jesus approves homosexual marriage. Historical monuments hurt black lives. Rich successful Americans must be punished.”

Family members and friends who suddenly embrace the dark side believe they are simply being fair. Fake news media, Hollywood, Democrats and public education pounds them daily with lies about how mean and unfair America is to blacks, women, illegals, the poor and so on. Conservatives/Christians are being suckered into believing various groups are victimized daily by America’s racism, sexism and white privilege.

In truth, us everyday Americans are the real victims. We’re the ones minding our own business, daily attacked by Leftist hit squads. Everyday Leftists seek to undermine or tear down another of our principles, values, traditions and institutions.

Leftists have launched wars on Christmas http://bit.ly/2yEHXJD , Easter http://bit.ly/2i1Iq1 , Christianity http://bit.ly/2gcbSkB , patriotism, our founding fathers, marriage, having babies http://ind.pn/2sQCed0, the Constitution, pro-football, traditional families, masculinity, femininity and gender distinction http://n.pr/L88EZz . Leftists use their fake news media bullies and political homeys to force their agenda down our throats, while portraying themselves as victims of aggression from us mean intolerant everyday Americans.

The Catholic order of nuns, Little Sisters of the Poor, were minding their own business, serving the sick and dying for 100 years. Obama pounded on their door demanding that the nuns fund abortions against their religious convictions. http://bit.ly/2fZJYV8 Leftist infiltrators are Trojan Horses seeking entry to destroy or transform our institutions into ungodly cesspools of debauchery.

Remember the biblical account of the sodomites banging on Lot’s door demanding that he send out the angels to be raped by them? (Genesis 19: 1-16) Homosexual activists are banging on the doors of churches, Christian businesses, public schools and Christian organizations like the Boy Scouts of America. They are not simply seeking entry, they have been in these places for decades. Homosexuals are stealthily demanding enthusiastic approval of their lifestyle.

What sticks in my craw is homosexual activists being allowed to blatantly deceive and bully the American people. They say they only desire tolerance. They are lying. I don’t know about you, but I have loved and tolerated homosexual family and friends all my life. But that is no longer good enough. The homosexual movement is demanding that we approve of their lifestyle against the Bible.

Anything less than full approval of the LGBT lifestyle is called bigotry, punishable by public humiliation and economic death.

I just want folks to realize we are not the aggressors. We are the ones attacked everyday.

Hearing conservative/Christian associates suddenly parroting Leftists narratives is shocking and disheartening. At the end of the “Invasion of the Body Snatchers” movie, Donald Sutherland looked normal. But then, he let out a chilling scream letting the audience know his body had been taken over by aliens. I felt a similar chill watching football with a relative who is a huge football fan. He coached and loved football for decades. Shockingly, he said football should be banned because it is too dangerous. I thought, “Oh my gosh, they got him! His brain has been taken over by Leftist sports media.” I asked him if we should ban all dangerous sports. He did not reply. He also said NFL players are heroes for protesting our national anthem.

Following Obama’s 8 years of attacking Christianity http://bit.ly/2plTsy0 and undermining American exceptionalism, Leftists assumed Hillary would easily win the White House. Hillary in the big chair would seal-the-deal for Leftists to complete their transformation of America into their socialist/progressive, anti-Christian and anti-American dream.

Since the election of Trump, infuriated Leftists have launched a campaign to rip our country apart. Domestic terrorists are physically attacking whites, cops and Trump voters. http://bit.ly/2vEPMJ3 Leftist celebrities are hosting protest rallies, attacking our president, principles, values and institutions. While ignoring the epidemic of black on black homicides, Leftists are assassinating cops and demanding that we tear down historical monuments. http://bit.ly/2wEi9I3 Leftist college professors are advocating violence against anyone expressing conservative values. http://fxn.ws/2vEQkj5

Ask yourselves folks, are you responsible for all the hate, unrest and chaos in our streets today? No, you are not. You are working to pay your taxes, taking the kids to soccer and minding your own business. Meanwhile, Leftists are accusing you of being insensitive, intolerant and mean. It is all a scam folks. My fellow Americans, you are being played. Sleep with one eye open, less Liberalism snatches your brain in the dark.

Author: “Confessions of a Black Conservative: How the Left has shattered the dreams of Martin Luther King, Jr. and Black America.”
Singer/Songwriter and Conservative Activist
http://LloydMarcus.com