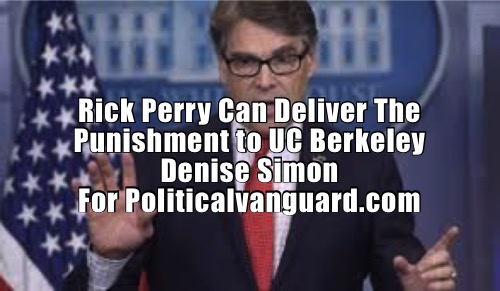 The Department of Energy has contracts with UC Berkeley that include research funds and grants for projects that include energy efficiency and laboratory operations. Rick Perry should be challenged with terminating those relationships and moving those projects to other universities that do not encourage and host ANTIFA events supported by a collection of university professors.

When conservative students are stalked by other students off campus and when video of proof of attacks are encouraged are provided to university officials, the game requires a change in funding.

Perhaps other federal agencies can line up as well against the tailspin occurring on the Berkeley campus. There are many.

The USDA, the Commerce Department, DARPA, the Defense Department, the Environmental Protection Agency, Health and Human Services, NASA, the Justice Department, USAID and even the State Department all have grant programs at Berkeley.

Time magazine in part reported the following in February:

The entire University of California system receives about $8.5 billion federal funding annually. That includes $1.6 billion in student aid and $3 billion in research funds.

Among the projects that benefit from such funding, the groundbreaking CRISPR technique, which can edit DNA, emerged in part from National Science Foundation funding at Berkeley. Jennifer Doudna, a molecular and cell biologist at Berkeley, is one of the scientists who developed the technique.

Due to limited financial resources, campuses have had to defer needed investments that directly affect students’ educational experience, including hiring faculty, updating classrooms, providing access to study space and providing the instructional technology essential to accommodating the pressing demand for courses in science, technology, education and mathematics (STEM) disciplines.

Increased demand for advising and other student services.

Additional one-time funds were provided in the 2016-17 budget to help increase academic support services. However, the strain on student support budgets has been severe since the Great Recession. While very helpful, one-time funds cannot adequately relieve the strain on these budgets.

Campuses report longer wait times for student advising and access to student mental health services has not kept pace with student demand for those services.

Most campuses are reporting housing challenges such as turning double-occupancy rooms into triples and an inability to provide on-campus housing to students beyond their freshman year. Campuses have been converting study areas and other spaces used for academic purposes to temporary quarters as part of a short-term strategy to meet student housing needs. The student housing occupancy rate in 2015-16 was 108% and is projected to be significantly higher in 2016-17.

If you can stand reading the financial and success propaganda published by the California University system or maybe just scroll through the 240 pages, go here.

Where billions are on the ledger, there is yet another ledger and it is a secret slush fund. In April, the San Francisco Chronicle reported that the audit found that the secret fund of $175 million ballooned due to UC Office of the President overestimating how much is needed to run the school system that includes 10 campuses in the state. Janet Napolitano, the former Department of Homeland Security chief, is in charge of the school system. Napolitano denied the audit’s claim. She reportedly said the money was held for any unexpected expenses. Her office also denied the amount in the fund.

“The true amount is $38 million, which is roughly 10 percent of (the office’s) operating and administrative budget, a prudent and reasonable amount for unexpected expenses such as cybersecurity threat response and emerging issues like increased support for undocumented students and efforts to prevent sexual violence and sexual harassment,” her office said in a statement.

In 1945, J. Edgar Hoover launched a full FBI investigation into the California university system and those files and reports are summarized here. Communism was festering and pervasive throughout the faculty.

Moving ahead to 2008, the LA Times published an item about progressive indoctrination by professors of the students. The summary was staggering including Berkeley among other campuses.

Moving further ahead to 2017, the New York Times describes the violence at Berkeley as a semester of hate… a semester? Those semesters are countless and not only include ANTIFA, but include Justice for Palestinians and Boycott, Divest and Sanction (BDS). The 2016 report can be found here.

In summary, federal agencies can transfer loans, grants and funding to other schools where education is education and faculty and administrators don’t indoctrinate. It can begin with Rick Perry, the Energy Secretary. In closing, it would be a blockbuster event however to have a televised debate between Janet Napolitano and Mick Mulvaney, Director of the Office of Management and Budget over conditions of funding and fraud.