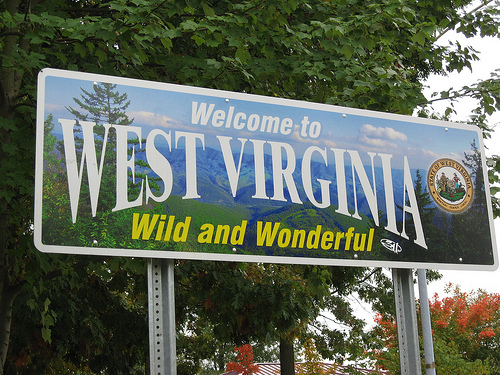 For those of you who haven’t heard, Mary and I moved from Florida to a tiny town in West Virginia to be closer to our parents. We are experiencing wonderful culture shock. I am not a fan of the winding mountain roads. Supermarket and hardware stores are over 20 miles away. And yet, we unexpectedly love our new heavenly haven of Americana.

I am one of around 20 blacks in the population of 500. Everyone from the town hall to the bank, post office and country store knew we were the Marcuses who “bought the white house”.

Virginia brought us homemade bread. Ron brought us corn from his garden which he promised to be the sweetest we have ever eaten. Ron was correct. Old men Charlie and George stopped by to welcome us. Peggy knocked on our front door bearing a gift of a homemade apple pie.

Mary purchased 3 huge real tomatoes for $2 from a road side vendor’s garden. The old man told Mary she could take as many tomatoes as she wanted. From another small vendor, we purchased locally raised grass fed ground beef. The sales lady said it will taste 10 times better than supermarket’s.

Handyman Randy is a hunter. Randy said he’ll keep us stocked with venison. I thought Randy would be impressed that a member of my family hunts with a bow and arrow. Randy explained that he prefers using a gun because if the hunter’s arrow does not hit the perfect spot, the animal will suffer. Wait a minute, Leftists tell us that hunters are coldblooded SOBs who don’t care about animals. Randy obviously cares. While installing our ceiling fan, Randy said he needed to get more “wor”. Mary eventually realized he was saying “wire”.

The post office and public library closes for lunch. I stopped in the town hall to purchase a permit for the fence I planned to have installed. The clerk looking a bit puzzled said, “We’re pretty laid back here. You don’t need a permit.” The police department consists of two patrol cars. The school’s marching band of about 15 students marches past our house practicing. They sound good.

On Sundays from our front porch, we sometimes hear the choir of one of the five churches in town. The Potomac River is in walking distance from our house, past the guy’s place with the horses.

I haven’t gone fishing yet, but a kid schooled me on the best fishing spots.

Driving around town, we shamefully laughed seeing a lawn sign that read, “Trump that B****!” Yes, this is definitely Trump country.

Mary and I attended a fundraiser at the fire hall for a needy family. The elderly husband has terminal cancer and wants to make sure his wife has a new roof on their home. The fire hall was pretty full.

Contrast my daily heartland experience with the putrid smelling Leftist hate dominating the airways and national political arena. Leftists bombard us daily with vitriolic poisonous lies for the sole purpose of removing Trump from office. It is truly amazing watching Leftists behave as if their entire existence is to create hatred for Trump.

Leftists’ relentless 24/7 efforts to brand Trump a racist wears me out. How on earth can Trump stand it? The answer is millions of Americans are praying for him. Despite Leftists’ best efforts, Trump is still popular and winning; dismantling Obamacare http://bit.ly/2yzAuZe and more.

Trump is using legal executive orders to undo Obama’s illegal executive actions. Trump is simply defending the law and our Constitution. http://washex.am/2yShw3l This has further enraged Leftists, making them even more committed to politically ripping Trump’s head off.

Leftists’ evil is glaring when placed side by side with the decent everyday Americans in my new hometown.

Mary and I are experiencing wonderful culture shock; friendly people who appear to love God, family and country. Trump country!