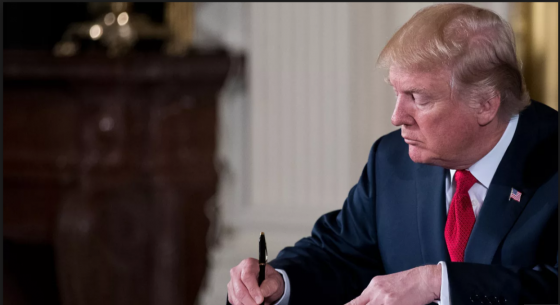 In a case now pending before the US District Court for the District of Columbia,1 the trial judge recently granted a preliminary injunction which purports to temporarily stop the Trump Administration from banning so-called “transgender” persons from serving in the Military.

Instead of going along with what everybody says – or expounding on one’s personal views on the topic –let us consult and obey the US Constitution:

“…The President is to be commander-in-chief of the army and navy of the United States. … his authority … would amount to nothing more than the supreme command and direction of the military and naval forces, as first General and admiral of the Confederacy…”

So! All the powers over the Military which have been delegated by the Constitution are vested in the Legislative and Executive Branches of the federal government.

The Judicial Branch has no role to play in the organizing and operation of the Military Forces.

Pursuant to Article I, Section 8, clauses 11-14, Congress alone has the delegated authority to decide who may serve in the Military. If Congress issues Rules banning transgender persons from serving, then it is the President’s job, as Commander in Chief, to enforce those rules.

Accordingly, instead of participating in the litigation before the federal district court, the Trump Administration should instruct the federal judge on the long-forgotten concept of “Separation of Powers” and advise the court, “You have no jurisdiction over the Military – we will not participate.”

1. Military courts and military lawyers in a nutshell

The Judicial Branch of the federal government was created by Article III, US Constitution.  That Article created the supreme Court, and authorized Congress to ordain and establish, from time to time, such inferior courts as needed.  Pursuant to that authority, Congress has established 94 federal district courts (where most federal trials are conducted), and 13 US Circuit Courts of Appeals.

The US Military has its own court system which is not part of the Judicial Branch of the federal government.  The military courts are “Article I Courts” created by Congress in the Uniform Code of Military Justice (UCMJ).2  They consist of trial courts where courts-martial are conducted; each Branch of Service has its own “Court of Criminal Appeals”; and the “US Court of Appeals for the Armed Forces” hears appeals from the Services’ Courts of Criminal Appeals.

And when military commanders need legal advice, they get it from their own Service lawyers (this is one of the duties of lawyers in the Judge Advocate Generals’ Corps).

The Judicial Branch of the federal government has no constitutional authority over the US Military.

2. Federalist Paper No. 80 and the meaning of “arising under”

Some may assert that the Judicial Branch has authority to determine who may serve in the Military because Article III, Section 2, clause 1 says,

But they would be wrong.  In Federalist No. 80, Alexander Hamilton explains the jurisdiction of the courts created by Article III: In the 2nd, 3rd, 4th, and 13th paragraphs, he shows that the purpose of the language quoted just above is to authorize the Judicial Branch to enforce the Constitution – not re-write it; and to enforce constitutional federal laws – not re-write them.

Furthermore, in Federalist No. 81 (8th para), Hamilton addresses judicial encroachments on legislative authority, and reminds us that such encroachments need never be a problem because of the courts’ “total incapacity to support its usurpations by force”; and because Congress may protect the Country from usurping federal judges by impeaching, trying, convicting, and removing them from office.

Accordingly, when a power is vested by the Constitution in the Legislative or Executive Branches [the “political branches”] the federal courts [the “legal branch”] have traditionally refused to interfere.

In Martin v. Mott, 25 US 19 (1827), the Supreme Court considered the Militia Act of 1795 which authorized the President to call forth the militia when he judged it necessary to repel an invasion.3  The Court pointed out that the power had been confided [entrusted] by Congress to the President, and

“We are all of opinion, that the authority to decide whether the exigency has arisen, belongs exclusively to the President, and that his decision is conclusive upon all other persons.”

In Foster v. Neilson, 27 U.S. 253 (1829), which involved a dispute between the United States and Spain over territory, the Court held that once those departments [Executive and Legislative Branches] “which are entrusted with the foreign intercourse of the nation” have asserted rights of dominion over territory, “it is not in its own courts that this construction is to be denied”.  “A question … respecting the boundaries of nations, is … more a political than a legal question; and … the courts of every country must respect the pronounced will of the legislature.”

Likewise, the power to determine who may serve in the Military has been delegated to the Legislative Branch of the federal government i.e., Congress. The Judicial Branch may not substitute its judgment for the Will of the Legislative Branch; and if it attempts to do so, Congress should employ the remedies suggested by Hamilton in Federalist No. 81.

4. The President’s “check” on the federal courts

Finally, let’s look at Federalist No. 78 (6th para) where Hamilton – unlike the pundits of today – tells us the Truth about the powers of federal courts:

“…The judiciary … has no influence over either the sword or the purse; no direction either of the strength or of the wealth of the society; and can take no active resolution whatever. It may truly be said to have neither FORCE nor WILL, but merely judgment; and must ultimately depend upon the aid of the executive arm even for the efficacy of its judgments.” [boldface mine; caps are Hamilton’s] 4

An informed President who is a manly man will ignore ultra vires orders of the Judicial Branch.

Let us put the federal courts in their proper place!  Congress and the President have the recognized power to refuse to go along with unconstitutional or ultra vires acts of the Judicial Branch; and their Oaths of office require them to do so. Congress also has the power to rid us of usurping federal judges via the impeachment process.

1 The US District Court for the District of Columbia was established by Congress pursuant to Art. III, §1, US Constitution.

2 Congress’ authority to create the Military Courts is derived from Art. I, §8, cl. 14, US Constitution.

3 Article I, §8, clause 15, delegates to Congress the power, “To provide for calling forth the Militia to execute the Laws of the Union, suppress Insurrections and repel Invasions.”

4 I trust you see why Hamilton is viciously smeared. The relentless attacks on our Framers have a purpose: Take them down – and our Foundation is destroyed.  Hamilton wrote most of The Federalist Papers, which Madison and Jefferson recognized as the best evidence of the genuine meaning of our Constitution.  What effect do these constant attacks on Hamilton have on peoples’ respect for The Federalist Papers?  Beware of false friends who undermine our Foundation; and of jealous men whose claim to fame is that they attack Hamilton.