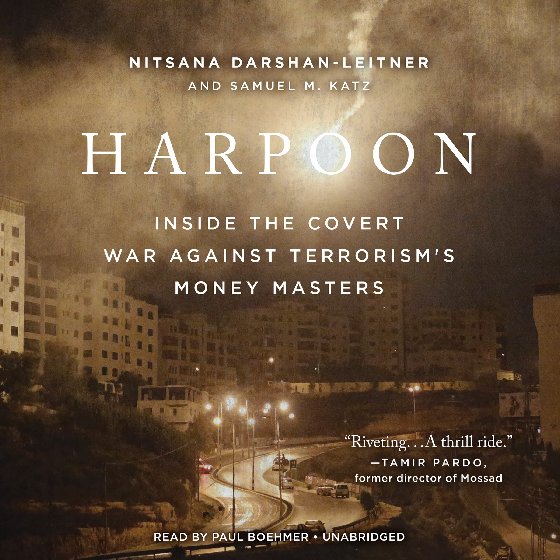 I had a very interesting book sent my way: HARPOON: Inside The Covert War Against Terrorism’s Money Masters by Nitsana Darshan-Leitner and Samuel M. Katz. I’m a military and counterterrorism wonk, so it peaked my interest. First off, this is a fascinating book and if you are analytical, it will really engross you. It comes at you from the stance of cutting off the money-flow to terrorists and that is definitely one of the primary tools we should be using in the war on terror. Plus, I just admire the heck out of the Mossad and Israel in general.

Think about it… terrorists have to have money to buy weapons to kill people. They get that money in many different ways… from the sale of drugs, to the sale of oil, investments, charities and foundations. We use our military might to keep ISIS and other enemies on the run, but to squash them, you have to strangle them financially. Israel is a master at this technique. For many years I have said we should emulate Israel in profiling and counterterrorism tactics, including border security. But I never really looked at how they cut off the lifeblood of terrorism… money. The US is now utilizing financial techniques like this to starve ISIS and it works. Europe should be using this weapon as well.

If the flow of money was cut off to ISIS and other terrorists, their Caliphate and networks would fall apart. This is why I was so furious when Obama gave millions to the Iranians, who are the biggest purveyor of terrorism on the planet. He knew what he was doing, he was funding a maniacal Islamic theocracy that will murder countless people with that money. Obama has blood all over his hands on that one.

Israel has learned the hard way, through blood and tears, that more than force is needed to take down her enemies. From 2000 to 2005, during the last Intifada, Palestinian suicide bombers relentlessly attacked Israel. The Israelis have one of the best fighting forces on the planet and they met the enemy head on. But no matter how hard they fought or how they won each encounter, the bombings continued. That was when Israeli leaders knew they needed a new game plan. So, they went after the money trail that financed everything from bomb-building factories to the cash bonuses issued to the families of suicide bombers.

Israel gave birth to a new multiagency task force codenamed Harpoon. It’s directive was to wage financial warfare against the enemies of the Jewish state. Harpoon tracked money to it source. That included charities in the US and multimillion-dollar transfers from Iran, the Gulf States and Saudi Arabia. In 2002, Harpoon expanded. It now focuses on not only intercepting the cash and the accounts, but taking them from their enemies and destroying them if necessary.

Nitsana’s book covers all of this and shows that counterterrorism is not just fought on the battlefield or through cloak and dagger, it is waged on the financial front out of necessity. Israel laser focused on this in every agency… and it worked. They even utilized lawfare in US courts and internationally to file lawsuits to stop state sponsors of terror in their tracks. The banks and the intermediaries that give life to these murderous demons are fair game and any method that can be employed to take them down is used by Israel. I applaud that wholeheartedly.

I vehemently disagree with those in the west and in the US that decry Israel’s tactics here. They raid banks etc. to stop terrorism before people die. That’s called survival. I have been less than thrilled with President George W. Bush lately. He criticized Israel’s actions as being “Wild West” in nature. Really? Because it looks to me like they work. Which is more than can be said for what the US was doing before President Trump took office. I’m not always thrilled with him either, but at least he’s kicking ISIS’ ass these days. The US has come around to Israel’s way of thinking. It’s about damn time.

From Nitsana at Fox News:

The Americans saluted Israeli spy chief Meir Dagan – the mastermind behind Harpoon – and his understanding that money was the oxygen that enabled the terror beast to live and thrive. Dagan was intent on suffocating this malignant creature through any and all means at his disposal.

In the wake of terrorist attacks in Britain, France, Spain Belgium, Germany and Sweden in recent years, Europeans will need to use the highly effective financial warfare template that Israel has already established if they hope to defeat ISIS and the terror armies that will follow.

The European intelligence services will have to cut through red tape and muster their resources to bankrupt ISIS, intercept its ability to move money from country to country, and stop it from funding fighters and operations throughout the continent.

As Nitsana put it (and I wish I had said this darn it), “A smart and successful war on terror requires James Bonds and General Pattons, as well as one or two Bernie Madoffs – and their services are needed immediately.” This woman truly gets it. Bankrupting the enemy destroys their supply lines and their killing machines. I admire this reasoning and I love this book.

A revelatory account of the cloak-and-dagger Israeli campaign to target the finances fueling terror organizations–an effort that became the blueprint for U.S. efforts to combat threats like ISIS and drug cartels.

ISIS boasted $2.4 billion of revenue in 2015, yet for too long the global war on terror overlooked financial warfare as an offensive strategy. “Harpoon,” the creation of Mossad legend Meir Dagan, directed spies, soldiers, and attorneys to disrupt and destroy money pipelines and financial institutions that paid for the bloodshed perpetrated by Hamas, Hezbollah, and other groups. Written by an attorney who worked with Harpoon and a bestselling journalist, Harpoon offers a gripping story of the Israeli-led effort, now joined by the Americans, to choke off the terrorists’ oxygen supply, money, via unconventional warfare.

“It’s a cliche after Watergate that the key investigation in most circumstances is to ‘follow the money’ (in the words of Deep Throat). This is the story of how Mossad led this movement and substantially effected investigations of terrorism and similarly important matters and how this influenced the CIA’s later work in the same field. Bravo Mossad! Thanks for leading the way” – R. James Woolsey, CIA director (1993-1995)

And here is the press release for the book, that gives an inside look:

The haunting images of the hijacked airliners crashing into the World Trade Center, the pools of blood on the streets of Paris, and the aftermath of the horrific massacres in a nightclub in Orlando and on the streets of Barcelona, have been seared into our collective conscious, leaving us all feeling frustrated, vulnerable and afraid. Tragically, the universal approach to combating this ruthless global threat has been focused on the conventional responses anchored in dilatory military actions that have produced foreseeable and pedestrian results. However, with groups like ISIS bringing in billions of dollars annually to finance their attacks, and the Islamic Republic of Iran bankrolling its proxies Hamas and Hezbollah with an endless flow of cash, a small and covert group of intelligence operatives spearheaded a dynamic new front to combat terrorist armies by depriving them of the oxygen they require to breath: the money needed to carry out attacks around the world. This is a story of a pioneering and innovative method of fighting terrorism – financial warfare waged against the extremist organizations, their leadership and the rogue regimes that support them. It all began in Israel, the small and embattled nation that has become fabled for its cutting edge hi-tech creativity and the prowess of its espionage services. This is the previously untold tale of perhaps the greatest and most disruptive Israeli start-up of them all and its joint-venture with the United States’ counterterrorism community.

Traveling back to the 1990s, Darshan-Leitner and Katz introduce Meir Dagan, a legendary soldier and spymaster, who spent a lengthy military career serving the State of Israel in the up-close-and-personal world of deadly special operations ultimately becoming the director of the Mossad, the Jewish State’s famed espionage service. Dagan’s reputation was that of a warrior, a man who moved silently behind enemy lines with a dagger between his teeth. But as a commanding general frustrated with the limitations and inefficiencies of the conventional approach to warfare that failed to stem the waves of bus-bombings, drive-by shootings and suicide attacks in Israel, Dagan sought new and imaginative strategies. He pieced together an outside-the-box solution to target the source of the terrorists’ power, a complex underground economy of “blood money” that enlisted banks and charities to distribute funds to the diabolical masterminds behind the suicide attacks and catastrophic murders. Dagan assembled a dream team of specialists from the intelligence services, the Israel Defense Force, the National Police, and even Israel’s IRS, to fight the ever transforming terrorist groups and their money across the Middle East, South America, Africa, and around the globe. In the process, Harpoon fused an operational alliance with the highest reaches of the United States government to fight terror on a truly global front.

This is the untold and remarkable story of modern day “Untouchables.” This elite and covert force intercepted banking records, perpetrated financial con games, unleashed invasive and destructive computer malware attacks, called in missile strikes against bankers, and violently eliminated financiers and bag men in foreign capitals. This is also the story of the private lawyers who pioneered the use of American counterterrorism suits to bring terrorist groups, and the countries and financial institutions that provided them material support, to their knees.

I have several new heroes here. This is just my kind of book. These are the good guys, make no mistake about it. If you want a peak into the real war on terror, this book is it. Pick up a copy at Amazon.com. I’m passing mine on to friends in the counterterrorism fields here in the US. It’s an epic read.

One thought on “Book Review: Harpoon: Inside the Covert War Against Terrorism’s Money Masters”