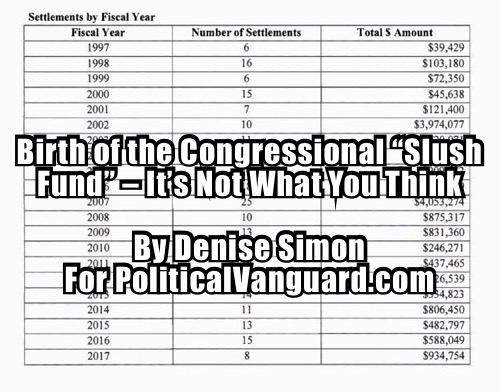 Wouldn’t you like to know the source of the money that is used to pay for those judgments against members of Congress?  I did – and, boy, was I surprised.

Let’s start with the  1995 Congressional Accountability Act (the “CAA”). It was the first bill “signed into law for the 104thCongress. The legislation applied 11 civil rights, safety, labor, and public access federal laws to the Legislative Branch, including Title VII of the Civil Rights Act, the Family Medical Leave Act (FMLA), the Fair Labor Standards Act (FLSA), the Occupational Safety and Health Act (OSHAct), the Uniformed Service Employment and Reemployment Rights Act (USERRA), and the Americans with Disabilities Act (ADA), among others.”

To enforce all of that, the CAA also created something called the Office of Compliance. The OOC has a Board of Directors and a staff. Besides compliance, it also is supposed to “provide an outreach and education program for Legislative Branch employers.”

As for how investigations work, we have been told that when members of Congress have allegations against them for sexual harassment or similar charges, those cases go before the associated ethic committees.

Sounds reasonable, but it is not. Why?

In practice, the Office of Compliance takes over all such investigations and makes any associated payouts.  Then, and this is a big THEN, the results are kept secret.

See?  We are being punked here – and it gets worse.

While discovery of this slush fund raised ire, blame has been applied to the wrong people to a large degree, i.e. the Speaker of the House or the Senate Majority Leader for keeping such secrets. That is a fool’s errand since the accountability is under the Treasury Department.

So what about legislative appropriations for the fund? Hah… there are no such appropriations. There is no such money assigned to the fund. It is a pay as you go thing, which is to say that Treasury actually has a slush fund to cover such miscellaneous requests.

That little fund at Treasury is titled the Judgement Fund and it for sure can write checks for eye-popping amounts for sundry different causes. Remember that $1.3 trillion paid to Iran? The Judgment Fund. Congress didn’t even know about that money until it was seen on television sitting on pallets at a Swiss airport being loaded on a plane.

From time to time you can sue the Federal government and win. If you are awarded monetary compensation, yup, it comes from that Judgement Fund at Treasury. Don’t forget though – it is still all taxpayer money.

Returning to the investigation of cases, there is a four-step process and a 30 day counseling period for many cases. In the case of sexual harassment or other similar charge like a hostile work environment or even alcohol or drug use, there is delay until three months have passed, including a 30-day period after enduring a mediation process with their harasser.

Once this whole process is complete and a financial award is granted, it is then that the Chair and the Ranking Member of the House Administration Committee is brought in on the case and can either approve or deny the monetary award.

For additional clarification on approvals and how Treasury owns this process, go here.

There has been substantial chatter and various demands that the members of Congress who are the violators be unmasked. There also has been calls for members of Congress to reimburse the government and pay for these hush funds out of their own pockets. While that sounds fair, it won’t happen overnight.

Both would require legislative action, on the one hand, and legal action taken by the Justice Department.  Those payouts are subject to the non-disclosure agreements and they would have to be judged null and void or superseded by law retroactively. The latter two present real legal challenges. Congress and the Justice Department work slowly and none of these demands will occur any time soon.

Due to Congressman John Conyers and Senator Al Franken, and the countless other previous cases, a bi-partisan law has been introduced titled Congressional Accountability and Hush Fund Elimination Act.

Yes, in theory it does. However, again, whether it can be used retroactively is questionable. Further, questions remain like: Would it repeal all or part of the original law?

This Office of Compliance (OOC) publishes the amounts of payouts and number of complaints in its annual report. BUT . . . Those numbers haven’t been published since 2014. In addition to that “oversight,” the law directs the OOC to publish the details of why complaints were filed. Right now those details aren’t being shared. Multiple congressional offices have said they have been blocked from finding out the exact number of sexual harassment complaints or to whom settlements were paid.

Does all of this explain and eventually solve the issue?

Hardly so, remember this is a condition that applies to approximately 30,000 Members of Congress and their staff (yes they have that many staff) – and don’t forget, there are millions of other Federal employees in other agencies. One can argue the State Department has a much worse problem due in part to personnel being out of sight out of mind mostly as a result of international assignments.

How about sex on the roof at an embassy in Iraq including a video? Do you recall the name Bret McGurk? He is presently the special envoy for the global coalition to counter Islamic State assigned to the State Department. Seems there are some wild emails of value that were covered up. The State Department is so bad it could have had its diplomatic section in Playboy magazine including behavior and conduct is beyond compare to that of Harvey Weinstein.

Things were fabulous at the State Department under Hillary Clinton and John Kerry. Prostitutes paraded through the diplomatic ranks in an almost daily procedural condition. Mission posts and embassies in many locations were essentially bordellos. How about sex to get a visa? Yup, that happened too. How about a sitting ambassador trolling public parks for prostitutes? Uh huh, and back at Foggy Bottom, the cover-up was complete.

Cover-up, slush funds and secrecy, it is a craft inside the Beltway… and way beyond Congress.