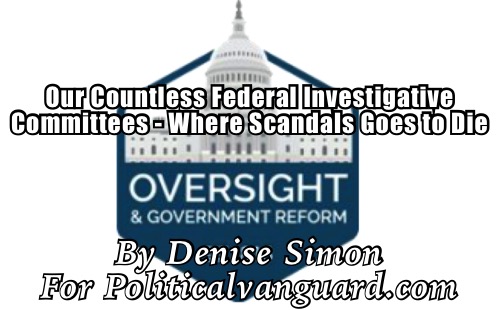 Congressional “oversight” is nearly as old as our Constitution. It started with James Madison, our fourth President.  In 1816, while he was President, the House of Representatives established a committee to oversee parts of the Federal government. Its focus was where and how money was spent.

That committee is still around today. Since 1927, the committee has had several names and mandates. In 1952, it became known as the Committee on Government Operations. At that time, its mission was to communicate and determine government economy and efficiency.

Today, the committee is officially known as the House Oversight and Government Reform Committee – no small task. Oversight of the cesspool that is the Federal government requires behind the door testimonies, swearing in and often subpoenas. When it comes to the ‘reform’ part…well that part is a lot harder to find.

The wide and deep responsibility of that committee includes oversight of the Post Office, Civil Service, FEMA, NASA, Obamacare, EPA, National Security, Benefits…heck all agencies and hundreds of which you have never heard.

It doesn’t stop there. There are numerous sub-committees – each with its own chairperson.  They are each  supposed to shine a light on such things as waste, fraud and abuse.  It is all part of the “checks and balances” of which you have heard so much. For that Committee to truly work, it requires transparency. That transparency, however, doesn’t really exist.

Beyond that Committee, both chambers of Congress have ‘ethics’ rules and associated committees to provide guidance, rules of behavior and a ‘don’t do that’ check list. However, there are no consequences or listed punishments for violations. Without consequences, what good are those rules?

Each and every government agency is also required to have an office and a toll-free number to provide tips on activities that may be deemed questionable especially when it comes to wasteful spending and other workplace violations. Meanwhile, every major agency has a team of lawyers where conditions are checked for legality and where language of documents is carefully drafted for legal compliance.

Alright, now let’s trot over to the Department of Justice that has an annual operating budget of around $34 billion. There are more than 110,000 employees at the Justice Department where there are more than 100 offices worldwide and 10,000 attorneys just within the United States. The largest office is the Executive Office for Immigration Review with just twelve percent of the issues and cases at Justice relating to legal and policy matters.

Reporting directly to the Office of the Deputy Attorney General is the Office of Legislative Affairs, Office of Legal Counsel and the Office of Intergovernmental and Public Liaison. You would think that with all these lawyers, agencies, offices and experience, there would be no graft, fraud, abuse or even bad behavior, right?

Remember reading that earlier part about the Oversight and Government Reform Committee that ensures efficiency and maintains caution of expending taxpayer dollars? Well, we are over $20 trillion in debt and that does not include the unfunded mandated expenses.

Wonder how we got here? Wonder where these reviews and investigations will reform?

Due to recent scandals regarding sexual harassment, the House has called for training and prevention. Questions abound. Who is doing the training and what are the standards of prevention? And why isn’t that training mandatory by the way.

The people within elected office and in government roles are civil servants and are indeed held to a higher standard much less behaving as statesmen. However, outside of elections, we can’t fire them for violations. Indeed, we can barely shame them.

Then we have the American Federation of Government Employees representing almost 1.0 million employees on the payroll. They are clearly protected. The most common violations of government employees and elected officials center on promoting an outside service or product and improper use of government property.

There is yet an office for that too – it is entitled the Office of Special Counsel Prohibited Personnel Practices. Oh, there is a toll-free number for ‘whistleblowers’ where it is noted to be a ‘hotline’ and those calls go to the Office of Inspector General.

Great, but then we needed a Whistleblower Protection Act to protect those making the complaints. Hah, well then the Department of Justice had to step in and define the program of whistleblowing for contractors, subcontractors, grantees, employees and managers to ensure there are no reprisals for filing complaints. Perhaps, this particular whistleblowing program needs lawyers to provide guidance and advocacy. Nah instead, there is a website and a video.

Surely whistleblowers are successful with viable complaints that include tangible proven evidence. Well not so much. For how the whole system has failed with the checks and balances, oversight and reform, check out this video from a hearing held in 2015.

Today we have computers, software, smart-phones, tablets, aides, staff, history, television, radio, social media, apps and 24 hour news operations. All should be a well-oiled machine in the Federal government and yet voters know little and question operations where answers are fleeting.

200 years later, trillions of dollars, subpoenas, investigations, lawyers, offices, rules, oversight and more is hardly any accomplishment in a well-oiled machine and a far departure from the days of James Madison.