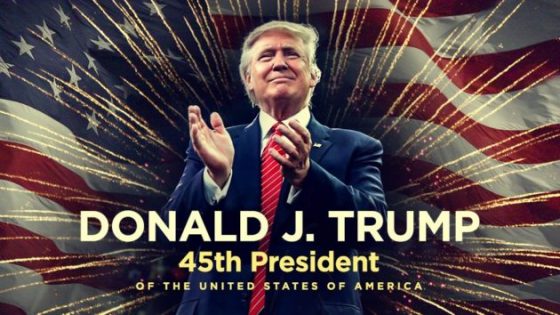 I remember that painful election night in 2012. Against reason, Americans chose to give Obama four more years in the White House.

As a Christian, all I knew to do was trust God. Little did I know Obama’s re-election was setting the stage for long-shot dark-horse presidential candidate Donald J. Trump. Over 8 years, the shine wore-off electing the first black president. Americans knew Obama was driving our country in the wrong direction. We subconsciously felt the tyranny of political correctness. Obama led Leftists’ war on Christianity. http://bit.ly/2plTsy0 Obama’s agenda was founded upon punishing America first. Thus, Americans were ready for real change. Enough with empty promises from fancy-talkin’ professional politicians.

Political elites thought Trump running for president was hilarious. It amazes me that political so-called experts are still puzzled why Trump won the White House. Establishment elites are finally backing away from the narrative that Trump stole the election via collusion with Russia or other dirty tricks.

This tells me these people (establishment elites) are sheltered from everyday Americans in their Washington DC towers of power. It is only common sense that a majority of Americans would desire a leader who loves his homeland and wants to make it the best it can be. Only liberalism indoctrinated anti-American zealots have a problem with Trump’s positive agenda for America.

Purposely unreported by fake news media, Trump has used his will and true grit to amass a substantial list of wins for America in his first year. http://bit.ly/2z41nrM Trump has been rolling back Obama’s messes in spite of Never-Trumpers and congress.

http://fxn.ws/2EevnjR God said He will bless those who bless Israel and curse those who curse Israel. (Genesis 12:3) Thank you President Trump.

Remarkably, Trump is fulfilling his campaign promises, despite fake news media dominating the airwaves with distortions, negative spin and actual lies about everything Trump says and does.

Trump successfully getting his tax cuts through congress has sparked an unprecedented economic boom for We The People. http://fxn.ws/2C54TUA Do you see the pattern folks? Thankfully, unlike most pro-politicians, Trump presses forward not giving a rat’s derriere about what fake news media, Democrats, the American left and establishment elites think or say about him.

By the way, I wish to thank the American Left for pushing Trump further to conservatism. Trump is not ideological, not viewing himself as liberal or conservative. But, when Trump saw Leftists’ vitriolic response to him doing anything good for America, it opened Trump’s eyes, pushing him further to our side.

Despicably, evil Leftists have sought to falsely brand Trump supporters as hateful white supremacists. We Trump supporters are decent hard working Americans who love our country and desire the best for all Americans regardless of race, color or creed. I am a black guy, proud and grateful to be an American. I even wrote and recorded the “Trump Train” song. https://youtu.be/XKpesfFPK0U

Despite the American Left daily launching every weapon in its arsenal at Trump, he remains laser-focused on dismantling Obama’s Punish-America legacy. http://bit.ly/2pFzF0u Thank you fellow Christians for your prayers.

I do not believe any other 2016 Republican presidential candidate would have been able to endure or match Trump’s remarkable list of restored freedoms in their first year. http://bit.ly/2z41nrM

Entering 2018, I am most grateful to God that Donald J. Trump is in the White House. Folks, last November, we dodged a bullet big-time. Hillary Clinton would have marked the end of America as we know it for Lord knows how long.

The same way the American left exploited Obama’s skin-color, using it as a bludgeon against anyone who opposed Obama behaving as our dictatorial king, Leftists would have used Hillary’s gender.

Queen Hillary supported mass murdering of the unborn. Hillary defended the horrifically evil practice of partial-birth abortion. http://bit.ly/2fqItia Partial-birth abortion is the abortionist delivering the entire baby’s body except for the head. The abortionist then shoves scissors into the full term baby’s head to kill it. http://bit.ly/2DfyarB

Hillary would triple down on Obama’s persecution of Christians. Hillary would dictatorially use government to cram various forms of sexual deviancy down mainstream American’s throats. http://bit.ly/2pD9lE4 Hillary would celebrate trifling lazy dependency on big government as the new American normal. As I said, anyone daring to oppose Hillary infecting Americans with Leftists’ socialist/progressive virus would be taken out; high-tech gang lynched or thrown into jail.

In essence, Obama regarded the U.S. Constitution as toilet paper; overruling many of our constitutional and God-given freedoms and liberty. Trump has dramatically put the breaks on Obama transforming America into a socialist, progressive and anti-Christian nation. And for that, I am extremely grateful to God and Trump.

Mary and I will spend much of 2018 traveling America, fighting to keep Republicans in control of the House and Senate which will help Trump reverse Obama’s crimes against us. If we stay firm in our support of Trump, together we will make our country great again. Quoting the Pointer Sisters’ hit song, “I’m So Excited!”