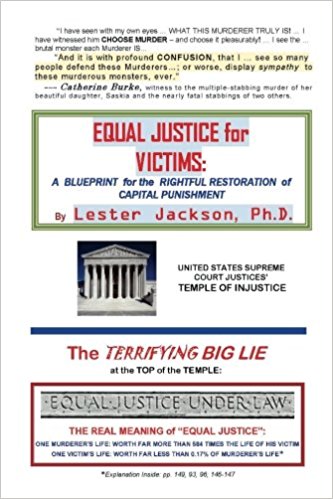 Recently, I had the honor and privilege of reading “Equal Justice for Victims: A Blueprint for the Rightful Restoration of Capital Punishment,” by Lester Jackson, Ph.D. It’s a fantastic book that covers capital punishment and why it is needed more today than ever before. Long time readers of mine know that I am a big fan of capital punishment, so this book is right up my alley, so to speak.

One of the things that has always bothered me as our legal system has become progressively more liberal, is the lack of actual justice for victims of vicious criminals. Many times, it seems that the legalistic sympathies lie more with those who have committed heinous crimes than the victims they have killed or damaged irreparably. This book addresses that issue in depth.

Far too often politicians decide the fates of both the aggrieved and the transgressors. Judges many times are put into positions because of political connections rather than a glowing track record of following the precepts of the rule of law. They care not at all about those who are the victims of the beasts among us and justice tends to go in the direction that benefits a political agenda rather than to assuage the grief and hurt of the victims and their families caught up in brutal crimes. This is an excellent book that highlights all of that by a brilliant and gifted author. I highly recommend it.

Amazon’s Synopsis for “Equal Justice for Victims: A Blueprint for the Rightful Restoration of Capital Punishment”:

Equal Justice for Victims A Blueprint for the Rightful Restoration of Capital Punishment
by Lester Jackson Ph.D.

The title is based on two shocking facts, one never reported by the media: (1) the disgracefully scandalous official abuse of violent crime victims; and (2) the ghastly gap in the value placed on the lives of victims vs. barbaric criminals.

The rulers who abuse their power, by forcing their will on the unwilling, are passionately devoted to the most depraved violent criminals.

With contempt for murder victims and their suffering survivors, who are also victims, America’s rulers have values vastly contrary to those of most decent people. In practice, our rulers consider the life of a convicted murderer to be worth far more than 584 times the life of his victim; and a victim’s life to be worth far less than 0.17% of his or her murderer’s.

Many millions of victimized survivors of murder victims believe it is long past due to provide Equal Justice for Victims. This book is written not only for them but also for anyone dedicated to justice, public safety and honest representative government; and who is repulsed by the current massive mockery of these widely accepted objectives.

Based on his training in American Government and Politics, Lester Jackson contends that capital punishment is a POLITICAL rather than a LEGAL issue. Politics involves conflicts between groups, interests and values. The death penalty clash is between victims and their vicious tormentors. The latter include not only convicted barbaric criminals but also their champions in and out of government.

Equal Justice for Victims describes evil and injustice. Good innocent human beings experience protracted excruciating suffering at the hands of not merely premeditated murderers, maimers and rapists, but also the people who love them, defend them and protect them, needlessly enabling additional savage crimes.

The defenders, protectors and enablers are at least as evil as those to whom they are so devoted. These include United States Supreme Court justices who (a) express deep concern for the most depraved and utter contempt for the most decent people; (b) save convicted premeditated rapists and murderers by lying about facts and law; (c) don’t care about the additional depraved crimes and suffering that they knowingly cause; and (d) for the benefit of the guilty, subject the innocent to unspeakable, unending and unnecessary agony. Because such justices know, or should know, exactly what they do, they are the epitome of pure evil.

The second part explains why one side has prevailed over the other. Although the author considers the late Justice Antonin Scalia to have been one of the greatest justices ever, this book also is critical of Scalia.

The final and most important part explains how to compel this country’s rulers to adopt a policy that values the lives of past and potential victims of savagery at least as highly as those of savages. The solution can only be political. Political justices must be fought in the political arena. It must be made clear to the public that the United States Supreme Court decides the most controversial cases on the basis of politics rather than law. It is imperative that the public understand that the most activist justices are politicians with same low integrity associated with politicians.

EJV details a political campaign to educate the public about the Supreme Court’s fraudulent illegitimacy. The worst justices concede that they would fail if The People refuse to accept their “demands.” The People must be persuaded to declare that enough is enough and, therefore, to demand that their elected officials put an end to unlawful and unconstitutional judicial “demands.”

The background of the author is also impressive:

Dr. Jackson’s writing has received accolades from Prof. Graglia and many others, including experts, victims, editors and general readers. For example, Prof. Graglia has described the author’s prior work as “…very impressive … well written and argued … enormous amount of research.”

The late great Justice Antonin Scalia complained that his colleagues abuse of power was limited only by their “sense of what [they could] get away with.” Long ago, Dr. Jackson concluded that activist Supreme Court justices could not succeed if the public were aware of their arrogance and dishonesty. Dr. Jackson views himself as a translator into plain English of what Scalia called “gobbledy-gook.” Thus, readability is his top goal. But that does not require sacrificing proof. Because deceitful Supreme Court power abuses are so shocking and so unbelievable, the author documents every factual statement he makes.

Over the years, Dr. Jackson has tried to present the plight of judicially tortured grieving survivors of murder victims, who are also victims, despite the denial of that obvious fact by Justice John Paul Stevens and his cohorts. Dr. William A. Petit, Jr. wrote to Dr. Jackson: “Thank you very much for your very well written and cogent remarks on the death penalty and victims… I truly appreciate you defending we the victims-very few people do; at least very few people do so publicly. There is very little truth out there about the DP, mainly obfuscation… You have clearly hit the mark and have stated the case well.”

Victims need to stand together for reform in the legal and judicial systems of this country. There should be the harshest penalties that can be imposed on those that attack, hurt and murder others. The death penalty has its place in this country and it serves as not only a deterrent, but the ultimate form of justice.

Dr. Jackson speaks for the victims here of others and he speaks for justice. This book is a must read not only for the victims of crime, but for all out there interested in justice and the rule of law. I highly recommend it. You can get a copy at Amazon.com.