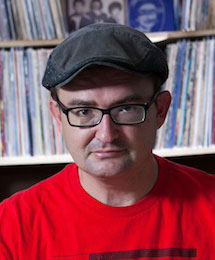 Scott Poole is a professor of history at the College of Charleston in South Carolina. He is the author of “Monsters in America: Our Historic Obsession with the Hideous and the Haunting,” as well as a number of other books dealing with popular culture and American history. He has been an advisor to College of Charleston Socialist Club and its chapter of United Students Against Sweatshops and is an active member of the Communist Party USA .

He also works closely with Democratic Socialists of America.

Scott Poole is also no fan of President Trump.

December 2016, more than 1,200 historians affiliated with hundreds of colleges and universities across the U.S. — including eight scholars at the College of Charleston, signed a public statement expressing “concern and alarm” over the First Amendment implications of the election of Donald Trump.

“On the eve of a new administration whose key players have traded in hateful rhetoric and emboldened the harassment of various targets, we urge Americans to be vigilant against a mass violation of civil rights and liberties that could result if such troubling developments continue unchecked,” the scholars wrote.

The “call to vigilance” was co-signed by College of Charleston professors George Hopkins, (a Democratic Socialists of America supporter) and Scott Poole.

On February 17, 2017 protesters gathered at the North Charleston Performing Arts Center Free Speech Zone 5 to protest President Trump who was in Charleston to, according to his Twitter account, “spend time with Boeing and talk jobs.”

Professor Scott Poole, took the mic, asking the audience “Are you angry? Are you full of hope? We need to be both. We need to be angry. Trump is coming here today. His buddies are here. His warehouse is here. He’s gonna high five Boeing execs. The art of the steal … crony capitalism. Let’s talk about his ally. Let’s talk about the war criminal and dictator Vladimir Putin. Google Aleppo. Find out what happened in Aleppo.”

“I came to the Republic of Cuba wanting to look with a critical eye, despite my political affiliation as a member of the Communist Party USA. Trump’s renewed effort to cut Cuba off from the world, and the complete lack of logic behind such a move, has been much reported on. I hope to speak about this while also worrying the reader a bit with the dangers of romanticizing what is, arguably, the world’s most successful socialist experiment.”

The fact Cuba is allied to Vladimir Putin‘s Russia seems to have slipped Professor Poole’s memory.