Press 2 for “what we have here is a failure to communicate” en espanol. Why reinvent the wheel? Hard labor working on our infrastructure by those who’ve broken the law has proven its worth.

TRIGGER ALERT: For social justice snowflakes and Progressive useful idiots – before you proceed further and get your knickers in a knot and pass-out from the vapors – the proposals in following piece incorporate a meaningful dollop of tongue-in-cheek, which an online dictionary defines as “characterized by insincerity, irony, or whimsical exaggeration.” We understand that having coming up through the modern Progressive-controlled education system, your budding sense of humor was crushed, displaced by a humorless sense of zealous self-righteousness – in other words, “social justice warrior-dom.” (Say that phonetically. Just kidding.  Maybe.)

We also recognize that, as a consequence, most of you have been conditioned to be binary-thinkers, devoid of a capacity to ponder complexity, degree or nuance.  Consequently, your binary analysis limited to: “Whatever I’m instructed is Progressive is good, and whoever doesn’t 100% buy-in to that is a [fill-in the blank] “____ phobe” or “hater.” While we feel sorry for you and your stifled development, we must not allow that to dictate public policy.

END_OF_DOCUMENT_TOKEN_TO_BE_REPLACED 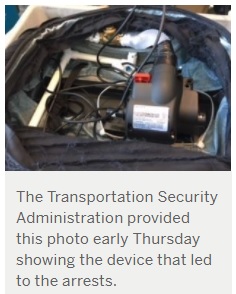 This past weekend it was reported that a small news team attempted to “sneak a fake explosive device”  through a TSA checkpoint at Newark’s airport. After reading several accounts of what may or may not have happened I came away wondering if the individuals arrested actually posed a threat to society or were they performing a service by testing security measures that are currently in place?

“The TSA said members of the group “attempted to intentionally carry through the security checkpoint an item in a carry-on bag that had all of the makings of an improvised explosive device.  At the same time, others in the group covertly filmed the encounter.”’

It got their attention, that much is sure; but what threat to security was there?  The information shared gives every indication that a small group of journalists were testing to see if the folks at TSA were doing a good job. If that’s the case then wouldn’t TSA thank them for having provided some form of proof, a means of extended job security for the Jack Booted Thugs who routinely violate everyone’s Fourth Amendment right to be secure from unwarranted searches?

According to an  article by Jeff Goldman , this was all a big misunderstanding, “Left Hook Media and Endemol Shine North America issued the explanation and an apology for the disturbance it caused at the Transportation Security Administration checkpoint after nine people associated with the show were arrested Thursday.”

TSA begged to differ, “It said the item inside the roller bag included a motor, wires and PVC pipes, “which are all indicators of an improvised explosive device such as a pipe bomb.”’

The law these individuals violated,  U.S. Code Title 18 Part I Chapter 40 section 844 , states that merely going through the TSA checkpoint with a suspicious item that “…will be used to kill, injure, or intimidate any individual…” (emphasis added) is all that’s needed to file charges, which is exactly what happened.

If these folks had worn napkins on their heads and pretended to be insulted, implied that racism against Islam was involved in the arrest process, claimed it was only a Clock; perhaps they’d have been invited to visit with former president Obama…but, hey, that’s another day, another time…

Now, let’s try this same law enforcement principle on Hillary Clinton as pertain to her handling of official government email while she was Secretary of Defense.  Did I say ‘enforcement’; I meant to say lack of enforcement, my bad. 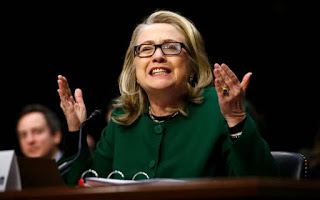 You might recall something about a handful of email, perhaps a small basket; okay it involved a few large dump truck’s worth of official government email that were sent via Hillary Clinton over an unsecured server.  This was done in direct conflict with procedures put in place to protect national security.  But; on top of that, her handling of email, some of which were clearly labeled Classified or Top Secret…her ‘sloppy or careless handling’ of them also constituted a violation of law.

“FBI director James Comey has stuck by his claim that declining to bring charges against Hillary Clinton for mishandling classified information was the right call because proof of intent was lacking.”

So, if you’re willing to accept that lame explanation, Hillary wasn’t charged with the crime she committed because the FBI claims they can’t prove intent.  Well, maybe they need to read the law which was violated, the one which doesn’t mention anything about needing to prove intent.

Here’s what Andrew MCCarthey wrote for National Review back in May of 2017:

“…this claim is specious on multiple levels. Subsection (f) of the pertinent statute (the Espionage Act, codified at Section 793 of Title 18, U.S. Code) makes it a felony to mishandle classified information “through gross negligence” — i.e., proving Clinton was sloppy or careless (or “extremely careless,” to use Comey’s own description) could have been sufficient.”

It’s okay to arrest and charge journalists for showing how TSA does it job by filming them as they identify a fake explosive device that was incapable of harming anyone but when a real threat to national security has been identified, a member of the untouchable elites who operates an extensive Shadow Government, that individual is above the law. If I’m mistaken I apologize…but I’m not mistaken, am I…

The Fabian Society never sleeps nor should freedom loving Americans. At the core, to study the Fabian’s history is paramount to seeing America’s future.