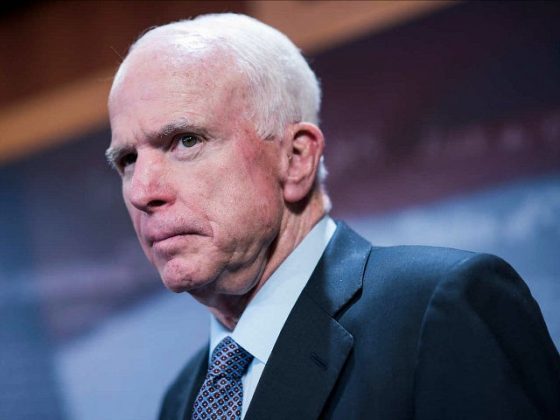 Sen. John McCain (R-AZ) has released a statement after the FISA memo was released today. McCain is the chairman of the Senate Armed Services Committee and he’s saying that the memo does not serve the interests of America, “only Putin’s.” Is that how you felt sir when you handed the phony propagandic Russian dossier over to James Comey? Pray tell, whose interests were you serving when you gave that to him, knowing full well it was not vetted and would undermine President Trump? Just curious.

In McCain’s statement, which I will post here in a minute, he talks about how the Russians tried to influence the 2016 election. Indeed they did. But they’ve been doing that for decades. Not until President Trump came along did any of you feel strongly enough about Russia to do something. Then suddenly you were anti-Russian. Huh… go figure. I’m sure it had nothing to do with wanting to destroy Trump, did it McCain?

In 2016, the Russian government engaged in an elaborate plot to interfere in an American election and undermine our democracy. Russia employed the same tactics it has used to influence elections around the world, from France and Germany to Ukraine, Montenegro, and beyond. Putin’s regime launched cyberattacks and spread disinformation with the goal of sowing chaos and weakening faith in our institutions. And while we have no evidence that these efforts affected the outcome of our election, I fear they succeeded in fueling political discord and dividing us from one another.

The latest attacks on the FBI and Department of Justice serve no American interests – no party’s, no president’s, only Putin’s. The American people deserve to know all of the facts surrounding Russia’s ongoing efforts to subvert our democracy, which is why Special Counsel Mueller’s investigation must proceed unimpeded. Our nation’s elected officials, including the president, must stop looking at this investigation through the warped lens of politics and manufacturing partisan sideshows. If we continue to undermine our own rule of law, we are doing Putin’s job for him.

I agree that we need to ferret out Russian and Chinese plants in our government. I’m all for that because we are lousy with them. But that’s not what Mueller is doing. He’s on a quest to unseat a sitting President. Yep, he got Manafort and I’m glad for that. I also think Flynn is dirty and not the hero some on the right make him out to be. As for Carter Page, he’s a Russian plant if I’ve ever seen one. But Page approached Trump, not the other way around and he did not last long in connection to the Trump campaign. The bad guy here is Putin, not Trump. There’s never been any evidence otherwise.

Here is the released FISA memo:

The FBI and the DOJ are dirty as hell. The memo also details how those senior officials in the DOJ and the FBI misled the Foreign Intelligence Surveillance Court on how the Trump dossier was actually opposition research funded by the Hillary Clinton campaign and the Democratic National Committee (DNC). They knew it was crap and used it as the basis to get a warrant anyway. Carter Page should go down, but he was used as an excuse to get at Trump. Not cool. This is a scandal bigger than Watergate ever was and there’s a lot more dirt coming down the pike according to Monica Crowley. This is just the beginning. Both agencies should be gutted and rebooted. This time with people who are actually vetted with real security clearances.

Last December it was revealed that it was McCain who passed the Steele dossier to former FBI Director James Comey. McCain met with Andrew Wood in Halifax, Canada at the Halifax Security Forum in Canada in November 2016 and they discussed the dossier. McCain has been wrapped up in this since the beginning. He’s a Democrat playing at being Republican and he has a massive hatred going on for Trump. McCain had his associate David Kramer travel to London to meet with Steele and get briefed on the dossier. They arranged to get a hard copy of the dossier to McCain and he gave it to Comey.

So, tell us again, Senator McCain… exactly whose interests do you serve? Because you look mighty cozy with the left and the Russians to me.