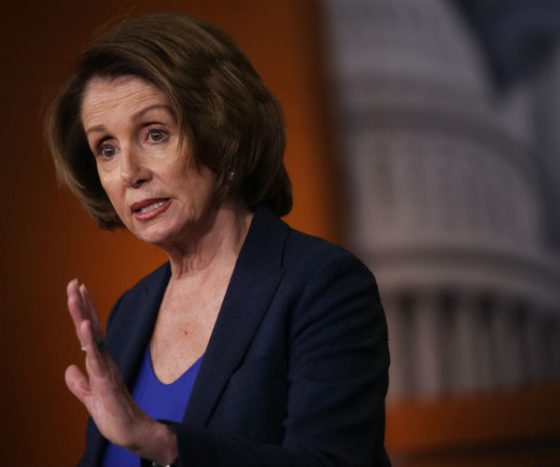 The rhetoric coming from Democrats is off the charts nuts. House Minority Leader Nancy Pelosi is now saying that the release of the FISA memo alleging abuse by the FBI and the Justice Department could easily lead to a “constitutional crisis.” Yesterday, Donny Deutsch on MSNBC called for a revolt and an uprising in the streets to remove Trump from office. But Pelosi’s fighting words are a bit more nuanced. “It’s appalling. It’s a misrepresentation. It isn’t even a release of intelligence material. It’s a release of a distortion of it. Its purpose is, of course, to thwart the Mueller investigation,” Pelosi said Friday. “If the President uses this fake, horrible release of distorted intelligence as an excuse to fire [Deputy Attorney General Rod] Rosenstein or [Special Counsel Robert] Mueller, it could lead to a constitutional crisis.” Is that a threat?

Never mind the fact that Trump has not fired Mueller or that the White House today said there are no plans to fire Rod Rosenstein either, Pelosi is playing a lying bully here. She’s threatening the President with dire consequences if he dares to do what he thinks is right. Frankly, I think both of them should be fired, but it would bring on an obstruction of justice charge. Trump and his attorneys know this and are playing their cards close their vests, just as they should here.

Pelosi is continuing to get more shrill by the day, which should alarm sane Democrats out there. She says Republicans “cherry-picked” information about the Russia probe in an attempt to discredit the Mueller investigation. They didn’t and that will be validated as other information is released. “They’re not representing the facts to the American people, and yet the President has given it his imprimatur. This is unprecedented to the nth degree,” Pelosi said. Yes, they are… the left used a fake Russian dossier to obtain a fraudulent FISA warrant numerous times. They took planted propaganda from the Russians and ran with it regardless of the consequences in their fervor to remove a sitting President from office. They lied to the FISA court and to the American people. I think that about covers it.

“The GOP memo is a disgrace,” Trump said in the Oval Office Friday. “Let’s see what happens… But a lot of people should be ashamed.” And he’s right. In fact, as Louie Gohmert and others have said, people should go to prison over this. This is just the beginning… more memos are on the way and the State Department is next to get hit over all this dirt.

Pelosi claimed Trump had “abdicated his responsibilities as Commander-in-Chief to protect the American people by protecting our intelligence sources and the rest.” And, she singled out House Intelligence Committee Chair Devin Munes, R-CA, for green-lighting the information’s release, calling him a “stooge for the President.” Before the FISA memo was released, Pelosi sent a letter to Paul Ryan that claimed “Nunes’ deliberately dishonest actions make him unfit to serve as chairman” and demanded that he be “removed immediately from his position.” That’s not going to happen Nancy, no matter how much you carp.

Senator Dick Durbin (D-Il) also took to Twitter to criticize the release of the memo. “Using the Nunes Memo as a pretext to fire Rod Rosenstein, Robert Mueller, or other DOJ leadership would clearly be an attempt to obstruct justice in the Russia investigation,” Durbin stated. His post includes a letter to the President, warning him that using the memo as an excuse to fire Rosenstein, Mueller, or other Justice Department officials “could result in a constitutional crisis of the kind not seen since the Saturday Night Massacre.” The senator was referring to former President Richard Nixon’s orders to fire special prosecutor Archibald Cox in the midst of the Watergate scandal in 1973. That order led to the resignations of Attorney General Elliot Richardson and Deputy Attorney General William Ruckelshaus.

However, the real Watergate-type scandal here is the weaponization of the media and our intel agencies against innocent Americans by Democrats. This time I don’t think they are going to get away with it. They are trying to keep our borders open to let in as many illegal aliens as they can to change forever the voting demographic in this country, while at the same time trying to unseat a sitting President of the United States in a soft coup.

Constitutional scholar Jonathan Turley believes nothing in the House Intelligence Committee memo “remotely” justifies the extreme rhetoric from House Minority Leader Nancy Pelosi and FBI Director Christopher Wray. Or other Democrats either… and Turley is a Democrat. I could not agree more. “Those of us who have been working in national security cases a long time expected there to be some type of footprint of sources and methods,” he said, appearing on Fox News’ “Tucker Carlson Tonight” on Friday. “There wasn’t. This thing wasn’t even remotely classified,” Turley added. “That really concerns a lot of us because it’s the use of classification laws for tactical purposes.” Bingo!

“Critics have said for years that the FBI and other agencies have been classifying material to avoid embarrassment,” Turley stated. “This may be the most public and relatively rare example of that,” the law professor brilliantly argued. “There is nothing remotely in this memo that justifies the rhetoric used by Minority Leader Pelosi and ranking member [Rep. Adam] Schiff. They all said there would be dire consequences,” he continued. “The FBI director said there would be grave problems that would arise with the release. And then you look at the memo and it’s sort of an empty grave.”

The memo “was written to avoid sources and methods,” Turley continued. “It was confirming that the dossier was a critical part, if not the determinative part in securing that FISA order,” he explained. “So, the question returns us to why did all of these members say that this would jeopardize national security?” The big question is why all the lying? What are they hiding and afraid of? “When you say there’s a national security risk about a document being released and it is something of this kind that doesn’t have any sources of methods or sensitive information, it’s a problem,” Turley said. “Because that’s lying to the American people.” 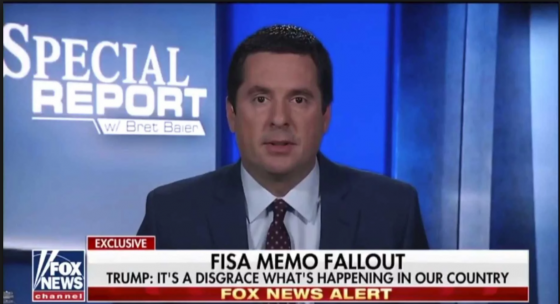 House Intelligence Committee Chairman Devin Nunes (R-CA) stated yesterday exactly what I said… there’s a lot more coming down the pike on all this. This is just the beginning. There will be more memos released as the committee concludes its investigation into the abuse of FISA warrants by the Obama administration. The State Department is next on the chopping block here.

While appearing on Fox News’ “Special Report” with host Bret Baier, Nunes confirmed what Monica Crowley was referring to yesterday. That the FISA memo is only the beginning of the investigation into all this corruption. When asked by Baier if more memos would come out, Nunes responded, “Yes, this completes just the FISA abuse portion of our investigation,” adding that the “investigation is ongoing.” “We are in the middle of what I call ‘phase two’ of our investigation, which involves other departments,” Nunes continued. “Specifically, the State Department and some of the involvement they had in this.”

If I were Democrats, I’d buckle up tight. This is going to be a very rough ride for them and deservedly so. When the FISA memo was released yesterday, there was a collective meltdown on the left and in the media. Democrats alleged that key facts were left out of the memo and that it endangered national security. As I understand it, the memo did not leave out key facts and in fact was of no consequence to national security either. It was marked classified to hide what they were doing. They said the memo was misleading and accused Republicans of trying to undermine Special Counsel Robert Mueller’s investigation.

The memo asserts that former FBI Deputy Director Andy McCabe stated in closed-door testimony that without the anti-Trump dossier, the FBI would not have been able to secure surveillance warrants against the Trump campaign. It also claims the dossier’s author, Christopher Steele, expressed a personal animus toward Trump. That is true and I have noticed that none of the Democrats are outwardly contesting the memo and the contents of it… they are saying that it helps Putin and is unfair. Typical.

Nunes, who co-wrote the memo with Rep. Trey Gowdy (R-SC), said he didn’t want to release the memo, but he had an obligation to the American people when he saw FISA abuse. And we owe Nunes a debt of gratitude for doing so. It was the right thing to do. “I have an obligation to the American people when we see FISA abuse,” Nunes said. “These are secret courts that exist to target for foreigners, for catching terrorists, for catching people who might be bad actors and the American citizens that are represented before this court have to be protected, and the only place that can protect them is the U.S. Congress when abuses do occur.”

“They wouldn’t have received a warrant without the dossier,” Nunes said. “The dossier was presented to the court as if it was true. The court was not told that the Democrats actually paid for this.” Nunes was adamant that it’s wrong that the FBI used opposition research, paid for by the Democratic Party and the Hillary Clinton campaign, to secure surveillance on at least one Trump associate. He also said there’s “damning” evidence that the courts were misled in an attempt to surveil a Trump campaign member.

Nunes characterized Democrats on the committee as dishonest actors who are not interested in the truth. “They know they’re not being honest actors, and I get tired of playing wack-a-mole everyday with the Democrats on this committee who never wanted to start this investigation in the first place,” he said, later adding: “These guys tell so many lies you can’t keep track of them.”

As for allegations about collusion between the Trump campaign and Russia, Nunes noted that much of the information in the dossier came from Russian sources. “So there’s clear evidence of collusion with the Russians,” Nunes said. “It just happens to be with the Hillary Clinton campaign and the Democratic National Committee.” Exactly.