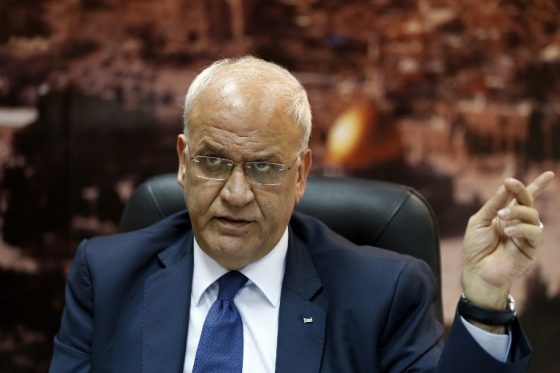 Secretary of the PLO Executive Committee Saeb Erekat just told Ambassador to the UN Nikki Haley to “shut up” and refrain from criticizing Palestinian Authority President Mahmoud Abbas. The arrogance here is breathtaking. He is trying to put Haley in her place. That’s not going to work. He accused President Donald Trump’s administration of orchestrating a “coup” to get rid of the Palestinian leadership.

“Nikki Haley needs to shut up and realize that the Palestinian leadership is not the problem,” the top Palestinian diplomat said in an interview with the Palestinian Al-Watan Voice news website. “Instead, the problem is the Israeli occupation and the policies it continues to pursue. I’m not saying that we don’t make mistakes; every society and every government makes mistakes.” It’s always the Jews fault, right? What an anti-Semitic douchebag.

Those heated remarks come after Haley condemned a speech given by Abbas last week at the PLO’s most recent meeting. He spread lies and anti-Semitic verbal abuse against Israel. You know, Caroline Glick is right… it’s time for the US to walk away from the PLO. “She called for overthrowing the democratically elected Palestinian president,” Erekat complained, calling the UN envoy “impudent.” What this asshat didn’t say was that Abbas’ four-year term ended in 2012 and since then no elections have been held.

“This is the president who led the peace process and promoted the principle of the two-state solution,” Erekat said. “Now this ambassador is accusing him of lacking courage, and is calling for replacing him.” And Nikki Haley is right… that’s exactly what should happen. “The Palestinian people are loyal to their martyrs, prisoners, wounded, struggles, steadfastness and heroism. This is the reality. The Palestinians are the only ones who are entitled to hold their leaders accountable.” Yes, and they are loyal to slaughtering innocent Jews in the name of Allah… let’s not forget that point either.

In her speech last week, Haley slammed Abbas for peddling “outrageous and discredited conspiracy theories.” “President Abbas declared the landmark Oslo Peace Accords dead. He rejected any American role in peace talks. He insulted the American President. He called for suspending recognition of Israel. He invoked an ugly and fictional past, reaching back to the 17th century to paint Israel as a colonialist project engineered by European powers,” Haley said. “A speech that indulges in outrageous and discredited conspiracy theories is not the speech of a person with the courage and the will to seek peace,” she added.

Erekat stated that Trump’s recognition of Jerusalem as the capital of Israel and his envoy’s incendiary comments was tantamount to staging a “coup” against the “Palestinian political system.” No, it’s not. Trump did the right thing. It should have been done long ago. And I would really suggest that he not beg for a real coup here. He might just find out what one really looks like. Israel and the U.S., he said, sought to “liquidate the Palestinian national project.” Neither have done any such thing. This is hyperbole to gin up violence and justify the slaughter of more innocent people, whose only crime is they are a different religion.

“U.S. and Israeli officials are saying that any Palestinian leader who insists on East Jerusalem becoming the capital of Palestine and is committed to the right of return, in accordance with United Nations resolution 194, should be removed from power and replaced,” he said. Hard to argue with that. “The Palestinian leadership has told the Americans and Israelis that, even after 1,000 years, they will not find any Palestinian who will collaborate with their scheme,” Erekat said. We don’t expect to, but we do expect that one way or another, the violence will end. “We will take Trump’s decision [to recognize Jerusalem as the capital of Israel] to the International Court of Justice and we will seek membership in more international agencies,” he said. Good luck with that… it means squat.

“We don’t seek a confrontation or a fight with the U.S. administration,” Erekat said. “On the contrary — they are the ones taking several steps. The U.S. administration is itself saying that it’s not an honest broker in the peace process. Therefore, we are seeking, together with international parties, to convene an international conference for peace.” Oh, bull crap. Again, I suggest they don’t pick a fight they can’t finish. Nikki Haley and President Trump do not suffer bigoted fools well.