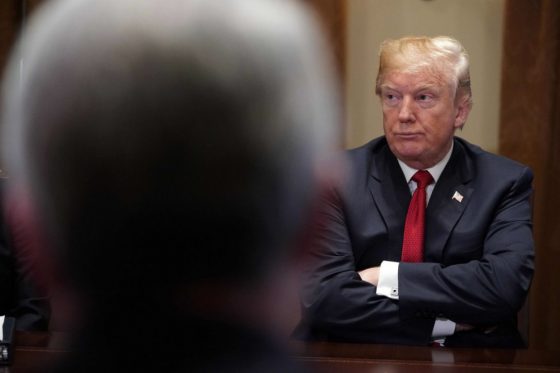 Well, President Trump just won points me yet again. Today he said that he would “love” to see a government shutdown if Democrats do not agree to his demands on immigration. He’s also ticked that they are balking at funding the military. “We’ll do a shutdown and it’s worth it for our country. I’d love to see a shutdown if we don’t get this stuff taken care of,” Trump told law enforcement officials and members of Congress at the White House. Shut. It. Down. If the Dems want to play at being obstructionists, make it hurt.

At an impromptu meeting on immigration, Trump was blunt. He stated that Democrats must pass new border-security measures — funding for the wall, an end to chain migration and diversity visas — in order to halt the flow of illegal aliens, which they don’t want to do. Trump is not going to extend the work permits for DACA either at this point.

“If we don’t get rid of these loopholes where killers are allowed to come into our country and continue to kill…if we don’t change it, let’s have a shutdown,” Trump said at a White House roundtable focused on the gang MS-13. “We’ll do a shutdown and it’s worth it for our country. I’d love to see a shutdown if we don’t get this stuff taken care of.” The President’s insistence on a shutdown followed remarks from House Homeland Security Committee Chairman Michael McCaul (R-TX), who lamented Congressional inaction on the issue. Also in attendance at the meeting were Reps. Peter King (R-NY) and Barbara Comstock (R-VA), as well as Secretary of Homeland Security Kirstjen Nielsen.

Congress is trying to meet the Thursday deadline to fund the government. I’ve heard a lot of optimism from politicians that they will avoid the shutdown. It doesn’t sound that way according to the President. Republican and Democratic leaders in the Senate announced earlier Tuesday they were close to a two-year budget deal, which does not include immigration language. But what you don’t hear is that they are trying not to give more funds to the military. Dems are saying there is bipartisan support for cracking down on MS-13… but again, it’s in the wording. Republicans want them deported, Democrats don’t.

Comstock, considered among the most vulnerable Republicans in this year’s upcoming midterm elections, stressed bipartisanship on the issue and told the President that “we don’t need a government shutdown on this. We really do not,” she said. “I think both sides have learned that a government shutdown was bad. It wasn’t good for them, and we do have bipartisan support on these things.” Trump let squishy Republicans know what he thought of all this. “We have to get that, they are not supporting us,” the President said. “You can say what you want. We are not getting support of the Democrats.” So true.

“We have to strengthen our borders, not by a little bit but by a lot. We are so far behind the time. And by the way, the world is laughing at us because they can’t believe these policies,” Trump said. “We’re going to get it stopped. And if we have to shut it down because the Democrats don’t want safety — and unrelated but still related, they don’t want to take care of our military — then shut it down. We’ll go with another shutdown.” Glory freaking hallelujah! It’s about time. I’m sick to death of this political two-step on illegal immigrants. Let’s finish this.

Trump angered his supporters by reaching out to Democrats and offering a path to citizenship for as many as 1.8 million immigrants who came to the US illegally as children in exchange for billions of dollars for a wall along the southern border and steep cuts to legal immigration. The Dems basically flipped him off over it. I’m glad… that deal should never have been made. Trump can bypass these people if he really wants to. He can use the power of the Executive Branch to do so and not give amnesty to illegal aliens. Just say no to DACA.

While the President in the past has floated the possibility of extending the March 5th deadline to end the program for young immigrants, White House Chief of Staff John Kelly on Tuesday poured cold water on that idea. If lawmakers do not agree to an immigration deal before Thursday’s government funding deadline, Senate Majority Leader Mitch McConnell (R-KY) has said he would hold an open debate on the issue. Call the Democrat’s bluff this time and shut the government down and keep it down until they play ball.

We need a 21st century MERIT-BASED immigration system. Chain migration and the visa lottery are outdated programs that hurt our economic and national security. https://t.co/rP9Gtr2E5N