END_OF_DOCUMENT_TOKEN_TO_BE_REPLACED

The volatility is intense! The Dow swung 900 points in the first 25 minutes of trading… down 550 points, than up 350 points! In late afternoon trading, the Dow surged about 400 points in about 10 minutes. Wow!

This is not investing, but rather blatant technology induced trading.

Yesterday, the two most popular ETFs/ETNs that shorted volatility were terminated. In the big picture, the loss was not of great significance… worth about $3.5 billion on Friday, to $150 million yesterday.

However, I think the termination is significant. One person who I view as an extremely sophisticated investor stated that this is not supposed to happen. The safe guards were in place to prevent such losses.

It is my firsthand experience that it is normally the “insignificant events” that cause systemic event; it is the proverbial canary in the coal mine. The two most prescient examples is the default of the Thai Baht that caused the Long Term Capital Management implosion that almost crashed the world’s financial system.

The other is the 2007 failure of Bear Stearns Mortgage portfolio that was a harbinger of the global meltdown that forever changed the face of American and capital globalism.

Yesterday, Bloomberg reported that the Fed is looking into cross-correlated algorithmic trading that has created “massive market imbalances.”

I have stated many times interest rates are a primary component of valuation models. A major catalyst for the selloff is an unexpected increase in interest rates, the result of greater economic activity. The selloff was greatly amplified by technology based trading.

I rhetorically ask what happens to interest rates and subsequently equities if the Atlanta Fed’s first quarter growth forecast of 5.4% materializes?

Historically, the yield on the 10-year Treasury is about the same as nominal GDP or GDP plus inflation. Today, this yield is about 5% versus the current yield of 2.75%. Wow! Are we in the beginning process of returning back to the norm?

Some have stated tax reform will not cause an increase in growth. There is no historical precedent for this statement. In every instance, tax reform has created higher nominal growth, higher interest rates and earnings.

The bad news in this scenario is it will be difficult for PE ratios to rise, ending the years’ long environment of the markets outperforming general economic activity. But as written so many times, this out-performance was relegated to only a handful of names.

In my view, corporations will spend their greater profits on plant and equipment versus share repurchases as the return on such will be considerably higher. This will increase economic activity.

This expected environment may hurt the valuations of some securities that are already greatly over-valued, but should benefit the smaller and value companies.

Wishful thinking? No, it is Economics 101.

The Dow should open moderately lower. The narrative is starting to rise about the complexity of ETFs… aka passive investing. It is quickly being acknowledged that no one knows how they are created, the interconnectivity, the leverage, or the extent of their proliferation. A statistic that I cannot fathom is there are more ETFs and indices than listed securities. Wow!

Several times I have commented that ETFs are similar to yesterday’s CDOs and CMOs. In my view, the major difference is I don’t think ETFs will bring down the financial system for the simple fact that the bond market is 10 times bigger than the equity market. The real economy is sharply recovering, perhaps at the cost of Wall Street. 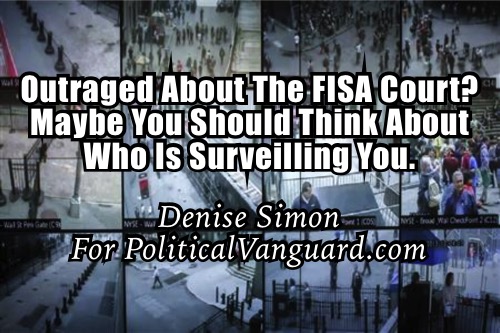 Outraged about the FISA court? Maybe you should think about who is surveilling you.

For days and days, the headlines have been filled with FISA court related stories. They include condemnation of the acts described in the Nunes memo, the abuse of law in gaining surveillance warrants through the Foreign Intelligence Surveillance Act and the Trump administration’s reaction to it all.  Much of the outrage comes from the list of questionable evidence provided to the FISA court for the renewal of the continued surveillance of Carter Page.

Okay, fair enough.  The discussion and debate continues in Washington, DC and the media sometimes drives, other times deflects and occasionally simply covers the wide and deep explosive probe.

So, we are all outraged right?  But what about you? Who is surveilling you?

New Flash: Your actions while either on the street, in your home, on phone calls, in your vehicle or interacting on the Internet are not any part of the expectation of privacy.

There is not any activity that is not recorded by tools you know precious little about, i.e. your smart phone, but should.  In truth, we live in a surveillance state.  We just need to recognize it and admit it. Once you do, you need to determine for yourself what your tolerance quotient is.

How many video cameras do you pass a day that apply facial recognition? Where does that data go and who is using it? What about security check-in points like going to public events or countless locations where you and the items you are carrying are being opened and searched by a person or a wand?

Is your mobile phone with you twenty-four hours a day where the internal GPS is tracking your movement? What about those fitness apps on your mobile phones that are synced with that smart device on your wrist? Uh huh… that too. Is your smart phone holding data that you put there that describes your whole life to people unknown to you?

Ah yes, there is social media to add to the equation.

Facebook collects your keystrokes, all of them. Where is that Instagram digital trail going and who is using that? Have you asked yourself about your credit card purchases or the use of your debit card? The bank has those records, all of them. Are they selling off that inventory of data to third party users with or without your consent? The answer is a resounding: Yes.

All of this, and much more not listed, is collected, measured and given a composite score to determine behavior, habits and attitudes. Do you know you are even given a ranking in various industries, least of which is the federal government? Sadly, your student children are not exempt either.

Will acknowledgement of these facts of comprehensive surveillance affect your daily activity? Should they? Are you deterred from your normal course of business each day knowing that there is something/someone watching you, scoring you and even censoring you?

What about your emails? Do you have a free email account from say Google? Yikes, did you read the small print where you granted Gmail to scan your digital messages?

You have lost control of your own privacy and security. While changing passwords and adding layers of security to your home and devices, at least something, if not everything, is not protected against collection or hacks.

People do not have an expectation of privacy in other public places. For instance, you have no privacy rights with respect to the garbage can you place at the curb.

“Other examples include: pen registers that record the numbers dialed from particular telephones; conversations with others, though there could be a Sixth Amendment violation if the police send an individual to question a defendant who has already been formally charged; a person’s physical characteristics, such as voice and handwriting; what is observed pursuant to aerial surveillance that is conducted in public navigable airspace not using equipment that unreasonably enhances the surveying government official’s vision; anything in open fields (e.g., a barn); smells that can be detected by the use of a drug-sniffing dog during a routine traffic stop, even if the government official did not have probable cause or reasonable suspicion to suspect that drugs were present in the defendant’s vehicle; and paint scrapings on the outside of a vehicle. While a person may have a subjective expectation of privacy in his/her car, it is not always an objective one, unlike a person’s home.

So, did the FISA court really need to approve a surveillance warrant on Carter Page?

Perhaps not, or was it just a formality? Can and did the FBI and the Justice Department use feeble evidence on the warrant application? What kind of feeble evidence and or surveillance is being applied to you for purposes we may never be aware? There is a new kind of abuse going on in the United States and it is the collection of surveilled information on you.

Check your outrage, maybe that outrage needs to be wider and more comprehensive.