By: T.F. Stern | Self Educated American

My wife and I own property on the north side of Houston and another piece of property half way between Dallas and Houston close to where the proposed High Speed Rail (HSR) reportedly would be constructed and operate.  Being a taxpayer and property owner means I have a ‘dog in this fight’.

You can review all DEIS-related documents and provide comments to the FRA directly at this link: https://www.fra.dot.gov/Page/P0779

We’ve been assured by those in favor of this very expensive project that all manner of funds have been secured and that land right of way will be covered by eminent domain since this project will serve the entire public.  Supposedly construction costs along with operating expenses have been calculated and support going ahead with a fancy technologically advanced Bullet Train that will take passengers from Houston to Dallas with a few stops along the way.

It has been suggested that a one-way fare on this train will cost approximately $200.  I hope this information is inaccurate; but even so that’s not competitive with existing air fare that is already in place and that existing air transportation is not taxpayer subsidized, something which the HSR package will heavily depend upon for operational expenses and maintenance.

Aside from the assurance (same as any promise made by a politician) that funding has been or will be secured for the entire project, there are other factors which should be of concern.  The highest on that list, very few folks I’ve talked to think the project is even wanted; except by those who would make a considerable pot of money for building this boondoggle of a money pit.

The folks along the path of the HSR concern me the most.  Eminent Domain is a sticky subject, one that has been abused more and more over the years.  We are being asked to take the government’s word that property rights will be respected, that any land required will be obtained in an equitable manner.  If that were true then the existing corridor between Houston and Dallas would be the site of the HSR.

I read where the proposed Houston Terminal for the HSR  might be near the old Northwest Shopping Mall (Highway 290 and 610 Loop).  There was a picture posted, an artist’s conceptual image that would make us all proud to have such a structure.  Why build the terminal adjacent to a financially rundown location when a real hot spot would be closer to a financially robust area such as the Galleria?

It would make more sense to have the HSR along the I-45 corridor, one that already exists, as there are multiple Park and Ride lots stationed along that route.  Folks wanting to use such a Bullet Train back and forth, Houston to Dallas, would in all probability want to be dropped off at convenient locations where they could access their car(s) or be picked up in a timely manner rather than add additional expenses such as taxi, Uber or rental units.

Some folks are pushing in favor of this never-ending taxpayer money pit, not an exaggeration of terms. Passenger rail service has proven to be a huge burden on taxpayers as Amtrak must be subsidized (taxpayer funded forever) just to keep afloat, according to a report by the Cato Institute.

I’d forgotten; we’ve been promised (same as any promise made by a politician) that would never happen with this new Bullet Train project.  Projected expenses will be kept and the HSP would come in under budget and within the time frame assigned without the need for taxpayer funding.  (There’s some beach front property in Arizona for sale if you believe that.)

Nothing has been said about recent passenger rail accidents that have killed and maimed so many folks in the past month or so.  Three major Amtrak (government run) passenger train accidents doesn’t exactly build public confidence for building yet another, a chance to ride into the eternities via a Bullet Train traveling at speeds approaching 200mph (guided missile), one that runs on railroad tracks.

What about protecting this vast stretch of rail, approximately 240 miles depending on where terminals are located, what about protecting this investment from acts of terrorism?  I didn’t see any mention of how that might be accomplished; but then again, what difference would it make? (borrowing a line from Hillary Clinton when several Americans were killed in Benghazi).

My last concern has to do with a recent Court Decision wherein it was ruled that governments, local, State or Federal were not obligated to keep contractual agreements.  This ruling was attached to police and fire fighter’s pensions in Rhode Island; however, this ruling sets the president upon which any and all contracts made with government entities will look to.  It validates my insistence, promises from government officials aren’t worth the paper they are written on. (same as any promise made by a politician)

Sorry; but these and a host of reasons that I’ve not even considered make such a proposed HSR project unacceptable.

Yesterday, I wrote it is the seemingly insignificant event that causes a calamity, utilizing the devaluation of the Thai Baht and the failure of the Bear Stearns mortgage hedge fund as examples. Both events on the surface were largely insignificant, but in reality were the catalyst or a harbinger of things to come.

Last week, two leveraged short volatility funds were worth about $2.5 billion. Today, they are worth about $135 million. This is nothing in a $23 trillion market capitalization of the S & P 500. The termination of these funds however was the catalyst that caused global losses of $3 trillion.

According to Barclays, there is an estimated $1.5 trillion is/was invested in funds with volatility linked strategies, a colossal sum capable of shifting global markets. Again, according to Barclays, as of Tuesday, direct volatility target funds have current assets under management of around $350 billion, of which $225 billion need to be sold in coming days.

Wow! If this data is correct, when or if these positions unwind, they can impact the markets, especially if they are unwound rapidly.

Many times I have commented about the leverage in the financial system, leverage that utilizes historical correlations. It is backward looking data and may not apply to the mechanics of today’s markets where the averages can swing 5% in a matter of minutes because of technology. The proverbial velocity of change is frightening and it can greatly skew valuations.

Yesterday was another volatile day. The Dow at one juncture was up 380 points only to close unchanged. The NASDAQ was down about 1% because of the selloff in some of the must own technology shares. The S & P 500 was down about 0.5%.

The 10-year Treasury auction was the weakest since 2015, drawing the highest yield in four years. Depending upon the maturity, prices were down between ½ and 1 ¼ points.

Chicago Fed President signaled yesterday the Federal Reserve would accelerate its tightening schedule if inflationary pressures increase, a statement that I think is obvious, but was a catalyst for the reversal in the Dow and for weak Treasury prices.

At this juncture, the Dow should open flat but his could change radically given the massive influence of technology based trading that can skew the averages 500 points in a matter of minutes, a skewing whose basis is entirely upon momentum. In my view, this is not investing, but rather a blatant casino type attitude that has been permitted to be created by the advent of technology based trading models, models that are similar in nature and utilizing outdated rules that have permitted massive market imbalances.

Florida State University College Republican chairman Landon Schneider discusses how Communist Angela Davis was met with “resistance” recently at FSU, which spent $31,000 to bring the former Lenin Peace Prize winner to campus for a talk about revolution. College Republicans protested her appearance with chants of “Hey Hey Ho Ho Communism has got to go” and signs proclaiming “Noles Against Communism.” 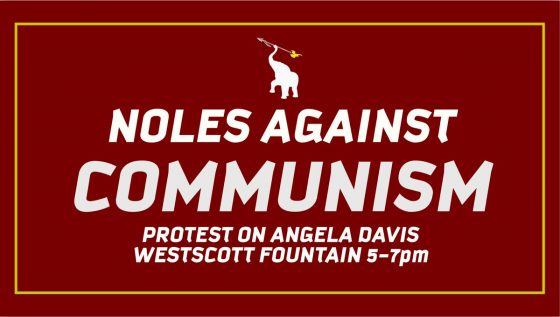