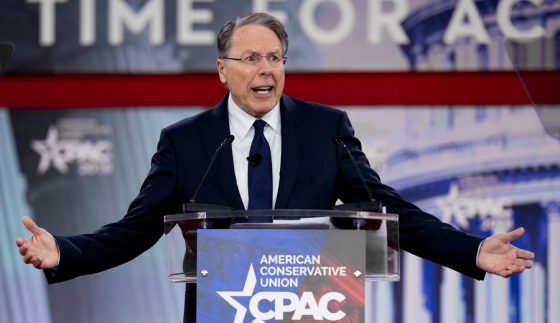 National Rifle Association (NRA) CEO Wayne LaPierre hit it out of the park at CPAC today. He bluntly warned conservatives that European socialists are smearing gun rights advocates and are trying to strip us of our Second Amendment rights. Bingo. “Socialism is a movement that loves a smear. Racists, misogynists, sexists, xenophobe and more. These are the weapons and vitriol these character assassinations permanently hang on their targets because socialism feeds off manipulated victims,” LaPierre told the Conservative Political Action Conference (CPAC).

LaPierre laid it out for Republicans today by boldly stating that “European socialists” are taking over the Democratic Party. That’s true, except they already have. He also named the “Occupy” movement, Black Lives Matter and Antifa as radical groups that are promoting “uncivil discourse” and aim to “eliminate due process.” That’s an understatement if I’ve ever heard one. They want to destroy the rule of law and shred the Constitution via chaos, violence and communist revolution. “The elimination of due process is the very gold standard of the socialist state,” he said. Again, correct and it’s refreshing to hear an American leader come out and say it.

What many people don’t understand, or don’t want to understand, is that Wayne, Chris and the folks who work so hard at the @NRA are Great People and Great American Patriots. They love our Country and will do the right thing. MAKE AMERICA GREAT AGAIN!

LaPierre’s fiery remarks come just as the gun grabbers are descending once again on American society after a tragic shooting at a Florida high school that took 17 lives and wounded 15 others. Jumping on the gun control bandwagon are Democratic lawmakers and more than a few Republicans. Both President Trump and the NRA are pushing the banning of bump stocks. Trump is in favor of raising the legal age to purchase a gun and stiffer background checks “with an emphasis on mental health” that could lead to a gun registry. None of that will work… but arming teachers and placing armed security at schools would. Instead of looking to abridge our rights, why not address the real problem of safety? Banning guns just makes us more ‘unsafe’ and constitutionally weaker.

Some Republicans have cautioned against moving too quickly on legislation as a reaction to the incident. And they are right… chief among those is Ted Cruz who is against anything that takes Constitutional rights away from Americans. Earlier in his speech at CPAC, LaPierre called proposals to limit the amount of weapons available to Americans “completely ridiculous” and said more security would help prevent future school shootings. He’s right. But the Marxists on the left are ginning up lynch mobs to come after the NRA and anyone who supports gun rights. Their vehicle is the leftist media.

“As millions of Americans search for meaningful solutions, what do we find?” Wayne LaPierre asked. “(Sen.) Chris Murphy, (Rep.) Nancy Pelosi and more, cheered on by the national media, eager to blame the NRA and calling for even more government control. They hate the NRA. They hate the Second Amendment. They hate individual freedom.” Yep, LaPierre is telling it like it is.

LaPierre went on to say that the “elites,” better known as “European-style socialists,” don’t care about America’s school children. They never have. They only appear to care when it fits their political agenda: “If they truly cared, they would protect them. For them, it’s not a safety issue. It’s a political issue. They care more about control and more of it. Their goal is to eliminate the Second Amendment and our firearms freedoms so they can eradicate all individual freedoms.” LaPierre said the liberal elites want more restrictions on law-abiding Americans, “Think about that. Their solution is to make all of you less free. They want to sweep right under the carpet the failure of school security, the failure of family, the failure of American’s mental health system, and even the unbelievable failure of the FBI. They fantasize about more laws stopping what other laws fail to stop.”

LaPierre went on to say that existing laws are being ignored, “Their laws don’t stop illegal criminals from crossing our borders every single day. Their laws don’t stop the scourge of gang violence and drug crime that savages Baltimore, Chicago and every major American community. Their laws haven’t stopped the plague of opioids, the Chinese fentanyl from Mexico that floods American streets and kills victims every single day in this country. No wonder law abiding Americans all over this country revere their Second Amendment freedom to protect themselves more than ever.”

Liberals “don’t care if their laws work or not,” LaPierre said. “They just want to get more laws to get more control over people. But the NRA– the NRA does care.” Very nicely put. He also said how the NRA mourns for everyone lost in last week’s shooting, but that we should talk about and implement real, practical security solutions to protect our children. He also noted that jewelry stores, banks, airports, NBA and NFL games, office buildings, and movie stars and politicians are “all more protected than our children at school.” Schools are soft targets that should be hardened immediately to protect all concerned, not softened additionally to leave them as even more enticing killing fields. The NRA advocates “effective, trained, armed security” inside schools to protect children. “Schools must be the most hardened targets in this country,” LaPierre said. “And evil must be confronted immediately with all necessary force to protect our kids.”

LaPierre’s best quote was this, “If they seize power, if these so-called European socialists take over the House and the Senate and God forbid they get the White House again, our American freedoms could be lost and our country will be changed forever,” he said. “And the first to go will be the Second Amendment of the United States Constitution.” And he’s exactly right. I just hope and pray that the NRA and President Trump do not give ground on gun control. We need to strengthen our gun rights, not weaken them like the socialists are trying to do.

The January FOMC Minutes stated that there is “substantial underlying economic momentum,” but indicated the Committee is in no hurry to accelerate the pace tightening. The Minutes indicated the possibility “economic growth would exceed their estimates,” they also cautioned that there were risks that inflation could “undershoot targets.”

Markets initially advanced on the Minutes, but upon further reflection Treasuries sold off. The 30-year is now at yields last experienced in July, 2015 and the 10-year is trading at over 4 year highs. Equities advanced handsomely on the data, but only to end moderately lower as Treasury yields rose.

One part of the Minutes that I found significant is that Committee Members now think the impact of the recent tax cuts could be bigger than previously believed. Moreover, the January meeting was held before the recent congressional agreement that increased both military and nonmilitary discretionary spending.

In other words, I think the mix of fiscal stimulus — both privately and by the government — could be significantly bigger over the next 18 months than assumed at last month’s Fed meeting.

Next week the FRB Chair will present before Congress the Fed’s semiannual forecast. I think this testimony could be of great significance.

For what it is worth department, according to Bloomberg, the markets still have not discounted three interest rate hikes for 2018, much less four and is only pricing in 1.5 hikes for 2019, still half of what the Fed is forecasting.