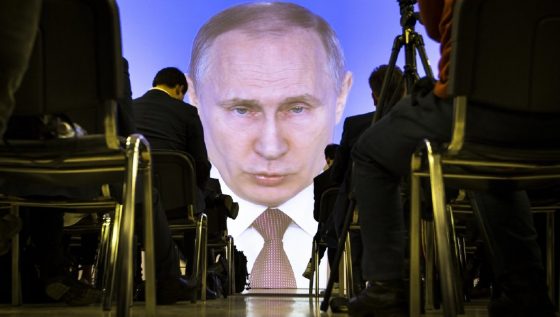 Russian President Vladimir Putin may not be the father of all lies, but he gives Old Scratch a run for his money. This last week, he gave an impressive annual address that certainly seemed to suggest the start of a new Cold War in which Russia showed off new nuclear-powered cruise missiles, drone submarines and other strategic arms designed to attack the United States. Heck, they even showed one weapon targeting Florida. Putin is denying this is the beginning of a new Cold War and calls any such claims propaganda. He boasted that the new cruise missile was tested in December and utilizes small nuclear reactor technology recently developed by Russian weapons designers, making it capable of traveling any distance and renders it all but unstoppable.

“My point of view is the individuals who have said that a new Cold War has started are not really analysts, they do propaganda,” the Russian leader told NBC’s Megyn Kelly in Moscow. “If you were to speak about arms race, then an arms race began at exactly the time and moment when the US opted out of the Anti-Ballistic Missile Treaty.” In point of fact, he is partially correct. This is not the start of a ‘new’ Cold War. The Cold War never ended and he knows it. It shifted. “We’ve started the development of new types of strategic weapons that do not use ballistic flight paths on the way to the target,” Putin said. “This means that the missile defense systems are useless as a counter-means and just senseless.”

Part of the presentation seemed to be a retread of one from 2007, but we all get the point. Putin has even had a page set up so people can help name his weapons now. How cute… not.

The White House wasted no time in responding. Press Secretary Sarah Sanders said the new Russian forces are destabilizing and violate arms agreements. And… they don’t care. Both Russia and China are preparing for war. This is just geopolitical foreplay. “President Putin has confirmed what the United States government has known all along, which Russia has denied: Russia’s been developing destabilizing weapons systems for over a decade, in direct violation of its treaty obligations,” she said. “As the President’s Nuclear Posture review made clear, America is moving forward to modernize our nuclear arsenal and ensure our capabilities are unmatched.” Yes, good thing too. Unfortunately, we are lagging far behind our enemies at the moment.

The State Department was not amused by Putin’s nuclear saber rattling. “We don’t regard that as the behavior of a responsible international player,” spokeswoman Heather Nauert said. Well, whatever gave you the idea they were in the first place? US intelligence claims they already knew about the weapons and that we are prepared to deter them. I certainly hope so, because China and probably Russia both have laser technology now that can take out our satellites as a prelude to a first strike… and that does not include cyber warfare. “We need to ensure we have a credible nuclear deterrent, and we are confident that we are prepared to defend this nation no matter what,” she told reporters.

Putin also confirmed development of a nuclear-armed, long-range underwater drone. The drone submarine was first reported by the Free Beacon in 2015. It is capable of attacking aircraft carrier battle groups, shoreline defenses and infrastructure, and also cannot be countered. The drones can be armed with either nuclear or conventional explosive warheads. That doesn’t exactly make me all warm and fuzzy. Putin also said that the very small, high-powered nuclear reactor on the missile is also being used to power the underwater drone the Pentagon has code-named Kanyon. These underwater drones are capable of diving “to extreme depths” while traversing long distances at speeds several times faster than a torpedo, he said. Now, he may be exaggerating, but I’d rather not find out the hard way.

“They are quiet, highly maneuverable and have hardly any vulnerabilities for the enemy to exploit. There is simply nothing in the world capable of withstanding them,” Putin said. That sounds like a threat. Putin made clear that his nuclear power “is not a bluff” and he told those living in the past to “stop rocking the boat we are all in and which is called the earth.” Putin is up for reelection this year and is expected to win… he’s a dictator. Duh. He says that the US has to pay attention now. I would hope we never quit. His nuclear bluster is a slap back over the US deployment of missile defenses in Europe to counter Iranian missiles.

The Pentagon will also be expanding our missile defenses here in the US in response to these threats. We will also be putting missile defenses in Romania and Poland. Putin says that expanding US missile defenses has nullified “all agreements” under the 2010 New START arms treaty and that the interceptors are targeting Moscow’s missiles. He also said the US withdrawal from the 1972 Anti-Ballistic Missile treaty in 2002 prompted the nuclear arms buildup. We are definitely in an arms race now if you didn’t know that before. Putin has been making fun of Space X and Elon Musk as well. He must fear them.

The Pentagon’s Nuclear Posture Review brought this all about. Putin has decided to play nuclear chicken with us. The Pentagon announced last month it will modify current nuclear warheads to produce low-yield weapons to counter Russia’s development of small warheads. “Russia’s strategic nuclear modernization has increased, and will continue to increase its warhead delivery capacity, and provides Russia with the ability to rapidly expand its deployed warhead numbers,” the report said.

Among the new technical developments, Putin said is “creation of a small-size highly powerful nuclear power plant that can be planted inside the hull of a cruise missile identical to our air-launched X-101 [KH-101] or the United States’ Tomahawk, but at the same time is capable of guaranteeing a flight range that is dozens of times greater, which is practically unlimited.” “A low-flying low-visibility cruise missile armed with a nuclear warhead and possessing a practically unlimited range, unpredictable flight path, and the capability to impregnate practically all interception lines is invulnerable to all existing and future anti-missile and air defense weapons,” Putin said. The nuclear propulsion system produced enough thrust and power during flight tests and ground tests and permit “work to create a fundamentally new type of weapon — a strategic nuclear missile equipped with a nuclear power plant,” Putin said.

Former Pentagon nuclear policymaker Mark Schneider said this was the most rabid speech he had ever heard Putin make. “The missile launch videos are unprecedented,” he said. “Usually he has a paragraph or two of attacks on the US, and then his militarism and nuclear threats. This time it is immediate retaliation and the standard super-weapons pitch only take it to an extreme.” I guess being on the eve of war will boost even a dictator’s testosterone.

The new cruise missile also appears capable of maneuvering during flight, a capability designed to frustrate missile defenses. Our current defenses are designed to take out missiles on a predictable, unchanging trajectory. “This shows the way it will be coping with defense lines,” Putin said of the video. “The range is unlimited, so the maneuvering can go on indefinitely.” Putin says no one else has these capabilities and if they are developed, “our guys will come up with something else by then.”

Putin insisted Russia wants peace, but said any attempt to use nuclear arms against Russian will be met with immediate retaliation. “I believe it as my duty to say this: any use of nuclear weapons of any yield—small, medium, or whatever—against Russia or its allies will be regarded as a nuclear attack against our country. Retaliation will be instant with all the ensuing consequences.” He says they won’t be used for a first strike. Anyone foolish enough to believe that should not be in military intelligence. Putin also bragged that this shows that Russia has rebounded from the Soviet Union’s collapse in 1991.

Putin also disparaged those seeking an arms race and unilateral advantage over Russia through sanctions and other international restrictions on Moscow’s military development. “Everything you have tried to prevent through such a policy has already happened,” he said. “No one has managed to restrain Russia.” Pride goeth before a fall, but arrogance is forever.

Other new arms discussed in the speech include the heavy intercontinental ballistic missile called Sarmat, or RS-28 that Putin said could reach US territory by flying over the South Pole. Polar trajectories are designed to frustrate missile sensors and defenses, including US interceptors based in Alaska. Russia also showed off two variants of hypersonic weapons—ultra-fast missiles that travel at five to ten times the speed of sound. One is an air launched hypersonic vehicle called Kinzhal, or Dagger, that travels at Mach 10, or 7,672 miles per hour, with a range of up to 1,240 miles. The missile can be armed with nuclear or conventional explosive warheads and is being tested for combat duty in southern Russia. The other is a hypersonic missile, a glider deployed from space, that is capable of traveling at Mach 20, or 15,345 miles per hour. It is called Avangard, or Advance Guard. They are also building a laser weapon that was deployed for the first time last year that appeared in a video to be an anti-aircraft weapon.

Putin is saying this is leverage and if Russia had been respected, it wouldn’t be necessary. Bull crap. “Nobody wanted to talk with us on the core of the problem. Nobody listened to us. Now you listen!” he said. I certainly hope the Pentagon is listening and can actually counter all of this. The war drums are deafening.

4 thoughts on “Putin Stokes The Flames Of The Cold War: Unveils New Weapons And Targets The US”