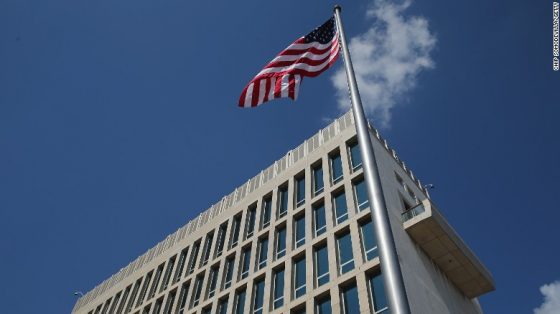 As of yesterday, the US made its staffing cuts at the Cuban embassy permanent. Last year, we withdrew 60 percent of our diplomats after numerous sonic attacks left them and their families ill. The attacks are ongoing and unexplained. Some are saying that it is a result of two listening devices too close together, but I’m not buying that. Our government is citing a need to protect American personnel from what the State Department calls “health attacks” that remain unexplained.

Last October, the State Department ordered all non-essential personnel and their family members to leave Havana immediately. It became impossible to protect them from the unexplained illnesses that have affected at least 24 Americans. By law, the department can only order diplomats to leave for six months before either sending them back or making the reductions permanent. Frankly, I believe US personnel were deliberately being targeted as either test subjects for weapons technology and/or to drive them out of Cuba. It worked.

The six-month period expires Sunday. So, the State Department said it was setting a new, permanent staffing plan that maintains the lower level of roughly two-dozen people — “the minimum personnel necessary to perform core diplomatic and consular functions.” The embassy in Havana will now also operate as an “unaccompanied post,” meaning diplomats posted there will not be allowed to have their spouses or children live with them in the country. This status typically applies only to war zones or other dangerous cities. It has become a hostile and unsafe environment for Americans, not that it was ever safe to begin with. Communist dictatorships never are.

Secretary of State Rex Tillerson signed off on the permanent plan for reduced staffing out of concern for “the health, safety and well-being of US government personnel and family members,” the department said in a statement. “We still do not have definitive answers on the source or cause of the attacks, and an investigation into the attacks is ongoing,” the department said. And they never will. We always have been and will be at one level of war or another with the communists.

Cuba has repeatedly denied either involvement in or knowledge of any attacks and has said its own investigation into the illnesses has turned up no evidence of deliberate action. Right. The United States has not accused Cuba of perpetrating the attacks, but has said Havana holds responsibility nonetheless, arguing that such incidents could not have occurred on the small, communist-run island without the knowledge of Cuban officials. I suspect the Russians are behind this and we know it.

The media and the left of course are saying that we are deliberately hurting the Cuban economy and tourism, which is untrue. What is true is that Americans are being attacked in Havana by some sort of weaponry. I’d call that an act of war.

The attacks cause memory problems, impaired concentration, irritability, balance problems and dizziness. At a congressional hearing in January, US officials detailed how personnel came to experience a variety of symptoms including sharp ear pain, headaches, ringing in one ear, vertigo, disorientation, attention issues and signs consistent with mild traumatic brain injury or concussion. In nearly all cases, the ailments were preceded by some sort of “acoustic element,” such as a “high-pitched beam of sound” or a “baffling sensation akin to driving with the windows partially open in a car.”

President Trump’s administration has also expelled 17 Cuban diplomats stationed in the United States. Trump has taken a tough stance on Cuba, tightening trade and ordering travel restrictions that harken back to the Cold War era. I think it is appropriate. Obama should never have relaxed relations with an openly communist regime to begin with. Their diplomats are spies and they attack our people. They have Russia, China and Iran in their country and as allies. This was the right and prudent thing to do.