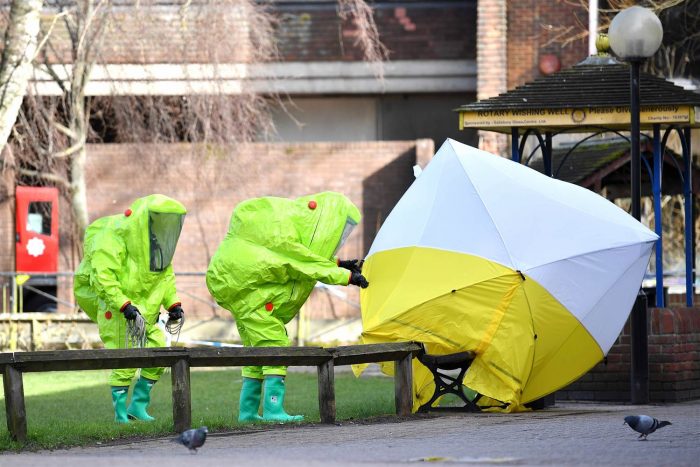 British emergency services workers in hazard suits put a tent on Thursday over the bench where Sergei Skripal and his daughter, Yulia, were found. Ben Stanstall / AFP – Getty Images

May says it is very clear that the use of this nerve agent goes against the spirit of the chemical weapons treaty. This is part of a group of nerve agents known as Novichok.

Using nerve agents of this kind is banned under international conventions, developed in secret to get around those treaties and designed to avoid detection. And it is banned in part because of its potency, and the horrible effects that could stem from its use.

Novichok was first developed in the 1970s and 80s by what was then the Soviet Union. The name means “newcomer” in Russian, and indicates the fact that when it was developed it marked a major breakthrough in the power of such chemical weapons.

That new potency meant that it was by some way the most powerful nerve agent in the world, and it continues to be thought one of the most deadly weapons available.

They work like all nerve agents, by overriding neurotransmitters in the body and shutting down the way it normally works. By forcing muscles to contract by attacking the nervous system, important parts of the body start to shut down – soon after someone comes into contact with such a nerve agent, the heart and diaphragm will shut down and death can result either through heart failure or suffocation.

Though it was developed to be as dangerous as possible when used, it was also designed so that it could be relatively easily transported. The nerve agent is made out of different “precursors” – which are relatively safe until they are mixed so that they can be used in a weapon. Novichok became famous in the 90s, when a Soviet scientist called Vil Mirzayanov revealed that the country had secretly developed the powerful nerve gas – which was far more potent than anything in the US. Though the Soviet Union had been developing it for some time, it didn’t become known for as much as a decade after it was actually available, because it had been kept entirely secret. More here.

Russia deployed a military grade nerve agent in a city of 40,000 people. Chemical warfare experts were sent to the scene and hundreds of people may have been poisoned in Britain.

British PM May: “The government has concluded that it is highly likely that Russia was responsible” for nerve agent attack on Russian ex-spy. “There are only two plausible explanations… Either this was a direct act by the Russian state against our country, or the Russian government lost control of its potentially catastrophically damaging nerve agent and allowed it to get into the hands of others.”

British PM May says she’ll give Russia until Wednesday to respond: “Should there be no credible response, we will conclude that this action amounts to an unlawful use of force by the Russian state against the United Kingdom.”

19 others treated after nerve agent attack on Russian ex-spy Sergei Skripal, his daughter

A police sergeant who assisted a former Russian spy and his daughter after a nerve agent attack in Britain is receiving medical treatment, as well as 18 other people who may have been exposed to the poison, police said Thursday.

The attack on Sergei Skripal, 66, and his daughter, Yulia, 33, is being treated as attempted murder, authorities have said. The two remain hospitalized in critical condition after being found unconscious Sunday on a bench near a shopping mall in Salisbury, 90 miles west of London.

Sgt. Nick Bailey, an officer from the Wiltshire police who assisted the two victims, also remained hospitalized on Thursday but appeared to be making progress, said Kier Pritchard, the acting Wiltshire police chief.

Some of those who were treated after the nerve agent attack received blood tests, support and hospital advice, Pritchard said. He would not say whether the other victims were other officers, medical workers or bystanders.

At a news conference, Britain’s home secretary, Amber Rudd, described Bailey as “still seriously unwell,” but “engaging and awake and talking to point.”

Police have not offered any specifics about the attack, including the type of nerve agent used or how it was delivered.

Skripal, a former military intelligence officer, was sentenced to 13 years in prison in 2006 after being convicted in Russia of spying for Britain.

He passed the identity of dozens of spies to the United Kingdom’s MI6 foreign intelligence agency, according to news reports. He was freed in 2010 as part of a U.S.-Russian spy swap that also included Anna Chapman, who was arrested in New York earlier that year.

The incident has drawn parallels to the death of former Russian agent Alexander Litvinenko, who was poisoned with radioactive polonium 11 years ago in London.

Litvinenko, 43, an outspoken critic of Russian President Vladimir Putin, fled Russia for Britain six years before he was poisoned. He died after drinking green tea laced with the rare and very potent radioactive isotope at London’s Millennium Hotel.

In a report published in 2016, a British judge found that Litvinenko was killed in an assassination carried out by Russia’s security services — with the probable approval of Putin. Russia has denied any responsibility for Litvinenko’s death.

There is no evidence of any Kremlin connection in Skripal’s case. But intelligence analyst Glenmore Trenear-Harvey, who formerly worked for MI6, told NBC News that he believes that the case has the hallmarks of Putin’s involvement.

The top person on John Kerry’s Iran JPOA team was Wendy Sherman. But then we have Obama’s dear friend Penny Pritzker in the mix too, along with Barbara Boxer and Hillary’s Jake Sherman all part of this National Security Action team, which is all things against Trump. So, while we do have the Director of MoveOn in the mix…this group likely has some robust funding from Soros.

This is a strike force that even includes Jeremy Bash.

He served as Chief of Staff of the CIA (2009-2011) and Defense Department (2011-2013), was Panetta’s right hand person and perhaps we should remember it was Panetta that allowed Hollywood access to top secret information to make a movie, that Zero Dark Thirty movie.

According to a June 15, 2011, email from Benjamin Rhodes, Deputy National Security Advisor for Strategic Communications, the Obama White House was intent on “trying to have visibility into the UBL (Usama bin Laden) projects and this is likely a high profile one.” 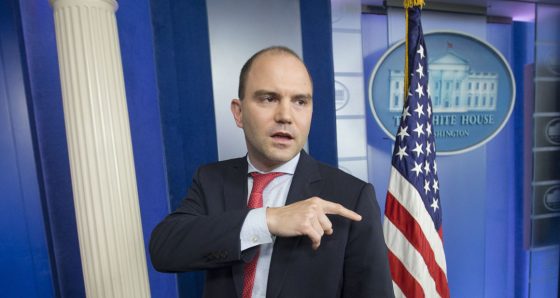 The mission statement of the group is anything but subtle: “National Security Action is dedicated to advancing American global leadership and opposing the reckless policies of the Trump administration that endanger our national security and undermine U.S. strength in the world.”

This organization uses the acronym NSA, which is ironic. Three of its founding members – Ben Rhodes, Susan Rice and Samantha Power – likely were involved in abusing intelligence from the federal NSA (National Security Agency) to unmask the names of Trump campaign staff from intelligence reports and to leak NSA intercepts to the media to hurt Donald Trump politically. This included a leak to the media of an NSA transcript in February 2017 of former National Security Adviser Michael Flynn’s discussion with Russian Ambassador to the U.S. Sergei Kislyak. No one has been prosecuted for this leak.

Given the likely involvement of Rhodes, Rice and Power to weaponize intelligence against the Trump presidential campaign, will their anti-Trump NSA issue an apology for these abuses?

It takes a lot of chutzpah for this group of former Obama officials, who were part of the worst U.S. foreign policy in history, to condemn the current president’s successful international leadership and foreign policy.

After all, ISIS was born on President Obama’s watch because of his mismanagement of the U.S. withdrawal from Iraq and his “leading from behind” Middle East policy. The Syrian civil war spun out of control because of the incompetence of President Obama and his national security team.

This was a team that provided false information to the American people about the 2012 terrorist attack on the U.S. consulate in Benghazi and the nuclear deal with Iran. I wonder if the anti-Trump NSA will include videos on its website of former National Security Adviser Susan Rice falsely claiming on five Sunday morning news shows in September 2012 that the attack on the Benghazi consulate was “spontaneous” and in response to an anti-Muslim video.

And of course there’s the North Korean nuclear and missile programs that surged during the Obama years due to the administration’s “Strategic Patience” policy, an approach designed to kick this problem down the road to the next president. Because of President Obama’s incompetence, North Korean dictator Kim Jong Un may have an H-bomb that he soon will be able to load onto an intercontinental ballistic missile to attack the United States.

It must appall this group of former Obama national security officials that President Trump is succeeding as he undoes everything they worked on.

ISIS will soon control no territory in Iraq or Syria because of the Trump administration’s intensified attacks on it and arming of Kurdish militias.

In sharp contrast to President Obama, President Trump drew a chemical weapons red line in Syria and enforced it.

North Korea is pushing for talks with the U.S. in response to strong United Nations sanctions the U.S. worked to obtain in 2017. And compliance with the new sanctions has been significantly improved, especially by China, as the result of President Trump’s actions.

President Trump repaired the damage done to U.S.-Israel relations by President Obama and has recognized Jerusalem as the capital of Israel – something several previous presidents promised but failed to do.

Iranian harassment of U.S. ships in the Persian Gulf stopped in 2017, likely due to the more assertive Iran policy of President Trump. This includes the president’s successful effort to build a stronger U.S. relationship with Saudi Arabia.