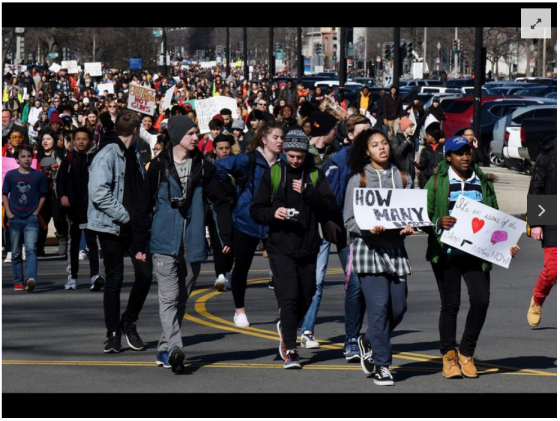 “This is what Democracy looks like!” Students and allies rally outside of the U.S. Capitol building in Washington, D.C. as part of #NationalWalkoutDay to protest for stricter gun laws. https://t.co/JuOWURifIL pic.twitter.com/zpLrLwkagJ

Today, thousands of students walked out of their classrooms across America to protest against gun violence. They usually did so with the full blessing and encouragement of their teachers. This sprang up after the mass murder in Parkland, Florida last month at a high school by a disgruntled former student who is also a deranged psychopath. 14 students and three staff members were killed in the shooting.

The National School Walkout was organized by the same people who organized the Women’s Marches. Marxists who are against the Constitution and the Second Amendment and think this is the time to take it down. Wealthy leftists including George Soros are funding the movement along with celebrities who have deep, anti-American pockets, such as Oprah Winfrey and George Clooney. According to EMPOWER, the youth branch of the Women’s March, there are more than 3,130 school walkouts scheduled across the country, as NPR’s Adrienne St. Clair reports.

“I’m just mad there’s no action by our government representatives,” Daniel Rogov, a junior in Brooklyn, New York, said today. Which is not true. Many would like to train and arm teachers at schools. They would also like to employ former police and veterans to guard schools. But stripping people of the right to bear arms, simply gives more control to the bad guys and encourages violence. “It’s all thoughts and prayers; it’s all talk,” he told ABC News. “After a gun violence tragedy there’s a speech talking about how we need change but there never is change.” These are the talking points of the radicals and Marxists who have coached and trained these kids into being useful idiots for their political agenda.

The walkout began at 10 a.m. in each time zone across the nation. It was scheduled to last 17 minutes. One minute for each of the victims gunned down in the Feb. 14 massacre at Marjory Stoneman Douglas High School in Parkland, Florida. Some schools are expelling kids who are walking out and I agree with them. This should not be allowed.

To the students at Stoneman Douglas, Daniel’s message is, “Keep making your voices heard. While the politicians might stop talking about this, we’re not done.” No, they aren’t and those like Daniel and David Hogg are being used as walking, talking propagandists to abridge our rights and destroy them forever. Over 3,000 walkout events were registered to take part in today’s call on Congress to pass tighter gun control laws, according to ENOUGH National School Walkout, the event organizers. They are taking place in virtually every state – the professional organizers did their job well. Some of the walkouts, especially in California, even turned violent today and this is just the beginning, not the end.

“Remember why we are walking out,” Stoneman Douglas survivor Lauren Hogg wrote on Twitter today. “We are walking out for my friends that passed, all children that have been taken because of gun violence. We are walking out for the empty desks in my classes, and the unsaid goodbyes. This epidemic of School shootings must stop.” No, they are walking out to further a radical anti-gun agenda by Marxists and are too stupid to see it. In Washington, DC, a huge crowd of chanting students gathered in front of the White House. Once the clock struck 10 a.m., the students silently sat down with their backs to the White House. There were also ‘die-ins’ that took place in various locations. 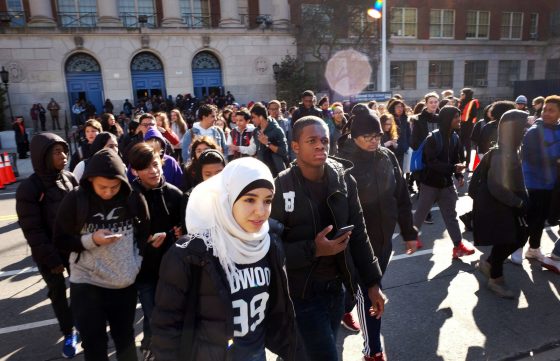 “We just want the White House to hear us,” Abby Silverman of Bethesda, Maryland, told ABC News outside the White House. Leftists are making progress in taking away gun rights from those under 21, even though they serve in the military and these kids are helping them. Kevin Butler told ABC News he came to the White House to “make sure there are stricter gun laws,” and even though the President wasn’t there during the sit-in, Kevin thinks their voices will be heard. Yes, they will… and mainstream America rejects them.

Outside Trump International Hotel in Manhattan, students chanted “Hey, hey, NRA, how many kids did you kill today?” None. They never have, but they do protect and lobby for Second Amendment rights. These kids are being taught that the NRA and anyone who owns a gun or supports gun rights is a murderer. It’s monstrous. Parents should speak with their kids about being used like this.

In Times Square, students protested silently. Women’s March Youth Coordinator Tabitha St. Bernard Jacobs, one of the adults coordinating students in the movement, told ABC News before the event that while the walkout was sparked by the Florida school shooting, the event is about pressuring Congress to act against gun violence overall. They were just waiting for an emergency to trigger them. She said the walkout was a way to shed light on the kind of gun violence that exists not just in schools but every day, like shootings that affect communities of color or devastate cities like Chicago. You know… the city that is led by liberal Marxists and has the strictest gun laws in the nation… that Chicago. It’s so bad there that Navy medics train for combat because it’s as bad or worse than being on the front-lines in Afghanistan. 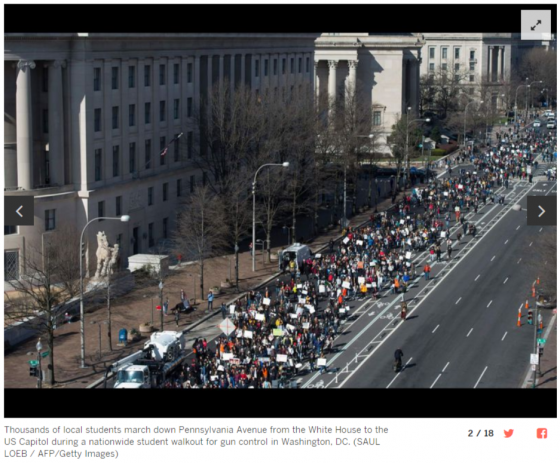 While many school districts were supportive of the protests, some schools from Pennsylvania to Georgia had reportedly threatened to discipline students participating in walkouts, which I think is very appropriate. In Plainfield, Illinois, where some students had planned to walk out, doing so came with a guideline. Students who wanted to participate in the walkout also had to attend an after-school discussion with state legislators to discuss issues that relate to school violence, like the political process, school safety, gun control and what influences politicians, Plainfield School District Superintendent Lane Abrell told ABC News. A student who walked out but did not attend the discussion with state legislators would get a one-hour detention, Abrell said. At least it’s a start.

Abrell said the walkout “in my opinion … doesn’t really solve the issue,” and the meeting with local legislators is a way for students who are genuinely passionate about the cause to learn how school violence issues can be solved. The American Civil Liberties Union (ACLU) said schools could punish students for missing class for walkouts, but the punishment should only be because students missed school and not as a harsher punishment because the students participated in a protest. Dozens of colleges and universities have said they won’t penalize applicants who are peaceful student protesters.

This wasn’t just high schoolers and college students. Many elementary students took part in the walkout as well. The walkouts on Wednesday are among several protests planned for coming weeks. The March for Our Lives rally for school safety is expected to draw hundreds of thousands to the nation’s capital on March 24, its organizers said. And another round of school walkouts is planned for April 20, the 19th anniversary of the Columbine High School shooting in Colorado.

Not all students support this and many are walking out under peer pressure. Parents should find out how their children are reacting to this so they don’t become radicalized. 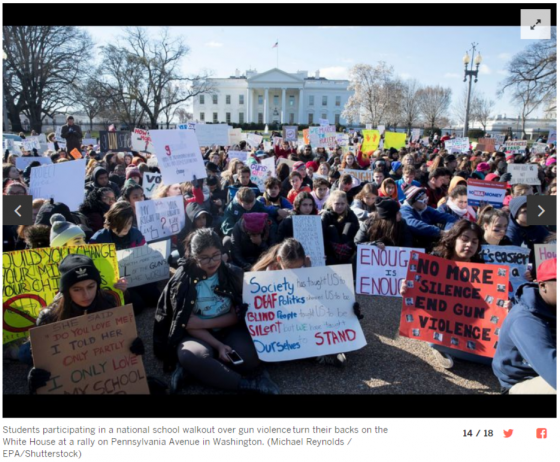 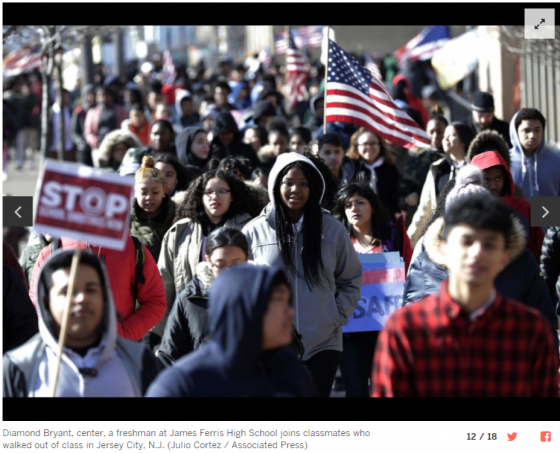 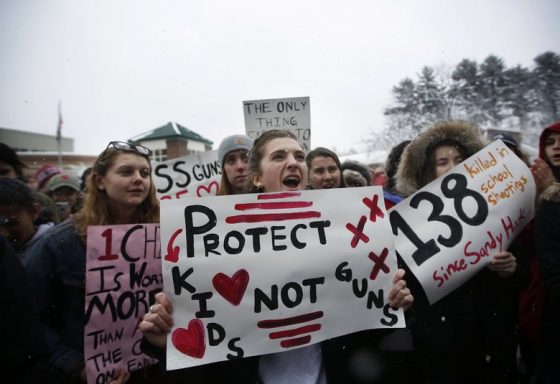 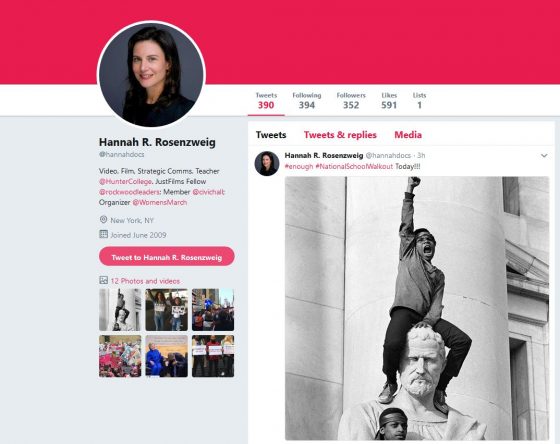 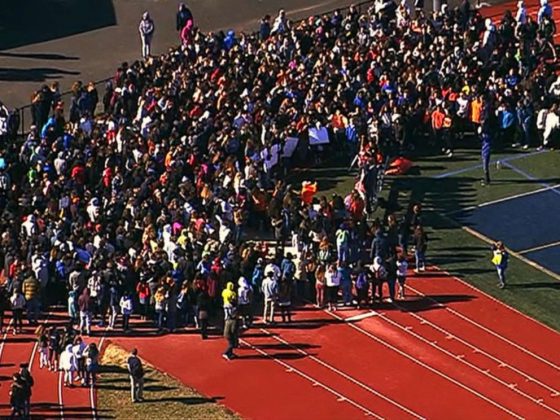 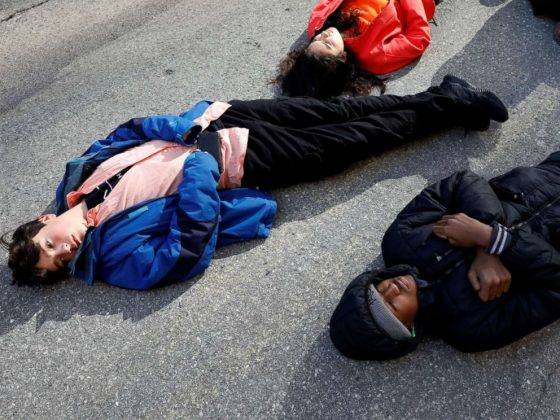 Student speaks in front of the U.S. Capitol on #NationalWalkoutDay: “Their right to own an assault rifle does not outweigh our right to live. The adults have failed us. This is in our hands now, and if any elected official gets in our way, we will vote them out.” pic.twitter.com/VEdAcLnuOI

How did he do in math, because I don't think that's how it adds up https://t.co/6sdLugEtC4

“The NRA has made me public enemy No. 1 and I am proud of it,” Sen. Chuck Schumer says. “We have been fighting for 10 years. Every time, the viselike grip of the NRA on the necks of some of these politicians has succeeded, but this time it won’t.” https://t.co/B9gqfHUvRF pic.twitter.com/ICqzq1naZy

"You, the young people of this country are leading the nation," Sen. Bernie Sanders says. "All across this country, people are sick and tired of gun violence, and the time is now for all of us together to stand up." https://t.co/B9gqfHUvRF pic.twitter.com/HS08Pf5xZi

"There is no compromise. We are not seeking a Republican solution or a Democratic solution," Maryland student says. "We are seeking an American resolution." https://t.co/B9gqfHUvRF #NationalWalkoutDay pic.twitter.com/7HnNOuPMmF

Covering a walkout this morning at an elementary school in Virginia, and the 11-year-old organizers had a press packet ready for me. pic.twitter.com/eeElhGciid

Mass. students gear up for national day of activism against gun violence. Many say school closings and 14 inches of snow on the ground won't keep them from protesting today. https://t.co/1KYck8yMDl via @wburedify

Hundreds of #Vermont schools have a snow day today, putting a damper on #NationalSchoolWalkout plans. pic.twitter.com/lzVHGL0tWm

A sea of young protestors in front of the US Capitol chanting “Enough is Enough” & “Hey hey, ho ho, the NRA has got to go” #NationalWalkoutDay pic.twitter.com/zaN9Dv0okk

2 thoughts on “National School Walkout: Marxists Rally Thousands Of Students Against Guns And The Constitution”