Lloyd Marcus thanks America for their help in the Pennsylvania’s special election.

When searching for your moral compass, do the world a favor, make sure you have one. Communism has never been tried? 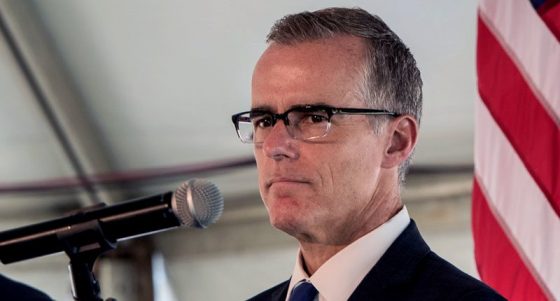 Just after midnight Saturday, President Donald Trump reacted to the news in a Twitter message:

“Andrew McCabe FIRED, a great day for the hard working men and women of the FBI – A great day for Democracy,” the president wrote, “Sanctimonious James Comey was his boss and made McCabe look like a choirboy. He knew all about the lies and corruption going on at the highest levels of the FBI!” More detail here including the timeline with former FBI Director James Comey.

The termination, which was triggered by internal reviews and comes a little more than day before McCabe was set to retire, sparks a war of words between McCabe and President Donald Trump.

Sessions said the firing — carried out a little more than a day before McCabe was set to retire from the FBI — was triggered by internal reviews that concluded McCabe violated Justice Department policies and was not forthcoming with investigators probing FBI actions before the 2016 presidential election.

Justice Department officials determined that “McCabe had made an unauthorized disclosure to the news media and lacked candor — including under oath — on multiple occasions,” the attorney general said in a statement.

“The FBI expects every employee to adhere to the highest standards of honesty, integrity, and accountability,” Sessions added.

McCabe quickly lashed back Friday, linking the firing to the repeated public flogging he faced from Trump. The former FBI No. 2 also tied his dismissal to the fact that he can support former FBI Director James Comey’s account that he was fired because of an unwillingness to shut down the investigation into the Trump campaign’s alleged ties to Russia.

“Here is the reality: I am being singled out and treated this way because of the role I played, the actions I took, and the events I witnessed in the aftermath of the firing of James Comey,” McCabe said in a statement. “The release of this report was accelerated only after my testimony to the House Intelligence Committee revealed that I would corroborate former Director Comey’s accounts of his discussions with the President.”

“The fact that [Trump] has said all these things about me, he’s made all these attacks, he’s gone on and on — you can’t dismiss it, that’s the problem,” McCabe told POLITICO in an interview earlier this month. “That’s why presidents don’t typically attack senior executives in the FBI, because they would never even want to create the impression that that sort of improper influence could be taking place.”

Shortly after midnight, Trump hit back, tweeting: “Andrew McCabe FIRED, a great day for the hard working men and women of the FBI – A great day for Democracy. Sanctimonious James Comey was his boss and made McCabe look like a choirboy. He knew all about the lies and corruption going on at the highest levels of the FBI!”

Prominent Democratic lawmakers expressed skepticism about Sessions’ decision, but seemed cautious about denouncing the action until Inspector General Michael Horowitz’s review is released. Many Democrats have praised Horowitz, whose office prepared the report that appears to have harshly criticized McCabe.

“In the absence of the IG report, it’s impossible to evaluate the merits of this harsh treatment of a 21-year FBI professional. That it comes after the President urged the DOJ to deprive McCabe of his pension, and after his testimony, gives the action an odious taint,” the top Democrat on the House Intelligence Committee, Adam Schiff of California, tweeted.

“I am going to reserve judgment on Mr. McCabe’s conduct until the Inspector General completes his report,” the House Judiciary Committee’s ranking Democrat, Jerrold Nadler of New York, said. “But I am certain that President Trump has attacked the reputation of a career public servant, and his wife, and the rest of the leadership of the Department of Justice—and those attacks leave us all questioning whether the Attorney General has made the right decision.”

“Decisive, appropriate, timely action by @jeffsessions to fire Andrew McCabe. DOJ/FBI are legendary, historic, important agencies filled w/amazing men & women held to highest standards,” Zeldin wrote on Twitter. “McCabe was a ringleader of rogue actors who were a shameful exception at top; not the norm.”

Mark Meadows, the leader of the conservative House Freedom Caucus, said that McCabe’s termination showed the need to add another special counsel to probe the FBI.

“This decision is not surprising based on information that continues to unfold on a daily basis,” Meadows said.

The embattled FBI deputy, who was due to officially retire on Sunday, had stepped down in January after facing repeated public and private rebukes from the president. Trump criticized his handling of the Hillary Clinton email investigation and accused McCabe of bias, citing his wife’s political ties to a prominent Democrat.

McCabe has been at the center of a Justice Department inspector general examination of the bureau’s activities prior to the 2016 election, including the investigation into the Clinton email matter. The FBI’s Office of Professional Responsibility had recommended that McCabe be fired, citing findings from the Justice Department’s inspector general’s report, which is expected to be released within weeks.

Sessions’ statement did not detail the precise allegations against McCabe. However, the fired FBI official’s own statement and text messages released by the Senate Judiciary Committee indicate that investigators concluded he ordered the disclosure of information to a Wall Street Journal reporter about an ongoing investigation into the Clinton Foundation.

As McCabe was under fire over donations his wife received for her Democratic campaign for the Virginia Senate, he indicated he had pressed to keep the foundation-related probe advancing even as Justice Department officials questioned its merit.

“This entire investigation stems from my efforts, fully authorized under FBI rules, to set the record straight on behalf of the Bureau, and to make clear that we were continuing an investigation that people in DOJ opposed,” McCabe said. The disclosure “was not a secret, it took place over several days, and others, including the Director, were aware of the interaction with the reporter,” the former FBI No. 2 added.

McCabe has pushed back at the timing of the inspector general’s report, suggesting that Trump’s frequent criticism of him has driven the speed with which the investigation concluded with a recommendation to terminate him.

“I have never before seen the type of rush to judgment and rush to summary punishment that we have witnessed in this case,” McCabe’s attorney Michael Bromwich said in a statement. ” This is simply not the way such matters are generally handled in the DOJ or the FBI. It is deeply disturbing.”

The president of the FBI Agents Association, Thomas O’Connor, issued a statement Friday night that appeared to express concern that politics may have influenced McCabe’s dismissal.

“While the FBIAA does not comment on personnel matters, the Association remains fully committed to ensuring that every FBIAA member is provided appropriate procedural protections. The FBIAA also strongly believes that personnel decisions should never be politicized,” O’Connor said.

Sessions’ statement indicated that the firing was also endorsed by the Justice Department’s top career official, Associate Deputy Attorney General Scott Schools. The statement did not indicate why the disciplinary process, which can often take more than a year, appears to have been dramatically accelerated in McCabe’s case.

After stepping down in January, McCabe went on “terminal leave,” intending to remain on the government payroll until his planned retirement on March 18. The firing is likely to cost McCabe hundreds of thousands of dollars by rendering McCabe ineligible for his full government pension and by delaying his right to any payout for almost seven years. Legal experts say McCabe’s options to challenge the firing are few because most FBI employees have little legal recourse against attempts to punish them over alleged misconduct.

A spokeswoman for McCabe declined to comment Friday night on whether he is planning a lawsuit.

McCabe told POLITICO earlier this month that he was “essentially removed from my job” in January following information “shared with” Christopher Wray, the FBI’s current director, “before the investigation was concluded.”

“I refused to serve in any other capacity other than deputy, and so I left on terminal leave,” McCabe said. Trump announced in June that he would nominate Wray to replace Comey. Wray took over the job in August, after being confirmed by the Senate.

Trump had questioned McCabe’s impartiality, citing the fact that his wife received funds from then-Virginia Gov. Terry McAuliffe, a Democrat and longtime political ally of Clinton, in a failed bid for the State Legislature in 2015.

“How can FBI Deputy Director Andrew McCabe, the man in charge, along with leakin’ James Comey, of the Phony Hillary Clinton investigation (including her 33,000 illegally deleted emails) be given $700,000 for wife’s campaign by Clinton Puppets during investigation?” Trump tweeted in December. Trump abruptly fired Comey as FBI director in May, saying he was “unable to effectively lead the Bureau.”

In a separate post, Trump added that McCabe was “racing the clock to retire with full benefits.”

Last summer, Trump questioned why Sessions had not already replaced McCabe, whom he labeled a “friend” of Comey’s.

The firing raised concerns about the integrity of the FBI’s examination of possible Russian election meddling in 2016 and potential ties to Trump campaign aides, an investigation that McCabe subsequently took charge of as acting director of the bureau.

McCabe began his bureau career at the New York field office in 1996. In January 2016, under former President Barack Obama, he was appointed to the bureau’s No. 2 position by Comey.