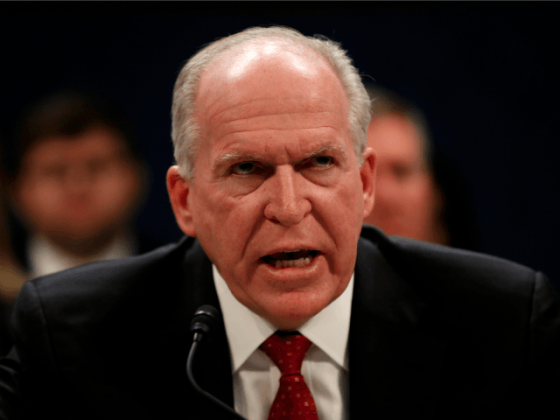 I have always considered John Brennan a Marxist and so is Samantha Power. Yesterday, Former CIA Director John Brennan tweeted what looks like a threat to President Trump after Attorney General Jeff Sessions fired FBI Deputy Director Andrew McCabe for leaking to the media and lying while testifying. McCabe was fired just two days before he planned to retire after more than 20 years of FBI service, yanking the full government pension he would have otherwise qualified for. The pension was said to be worth about $1.8 million. President Trump celebrating the termination set Brennan off.

When the full extent of your venality, moral turpitude, and political corruption becomes known, you will take your rightful place as a disgraced demagogue in the dustbin of history. You may scapegoat Andy McCabe, but you will not destroy America…America will triumph over you. https://t.co/uKppoDbduj

Of course, the left adored the tweet. But in point of fact, what it does is confirm what Trump has been saying all along… that the senior leadership of the intelligence and federal law enforcement services have become highly politicized and even weaponized. Brennan is beclowning himself here. The guy is a liar, a progressive and corrupt as hell. Earlier this month, Brennan criticized the President as “small, petty, and banal with your tweets. Your insecurity is well deserved, as is your concern over Russia investigation,” he said. The former CIA director has also previously described the President as “unstable, inept, inexperienced and unethical.” Brennan just took the fight to the next level.

Then, former UN Ambassador Samantha Power decided to step into the fight. Remember, her full role in “unmasking” Americans who appeared in foreign intelligence wiretaps has yet to be exposed.

Not a good idea to piss off John Brennan. https://t.co/VLg94OLL2R

She sounds just like Senate Minority Leader Charles Schumer (D-NY). He warned Trump last January in the midst of heavy leaks to the media by the FBI and intelligence services: “You take on the intelligence community — they have six ways from Sunday at getting back at you.” Which is true, but it does not make it right and it needs to be stopped. The Democrats seem to think threatening the President with the intelligence community is somehow okay. They show no concern for the abuse of power that might entail or for a separation of powers.

Trump, who has long called for McCabe’s firing, but said the decision was up to Attorney General Jeff Sessions, chimed in just after midnight on Twitter, calling the ouster “a great day for the hard working men and women of the FBI – A great day for Democracy.”

Samantha Power later tried to walk back her blustering tweet:

Whoa! Just home & see much misinterp. of earlier tweet. It’s testament to polarized times that it cd be misread as referring to something other than Brennan’s indignation. So will translate: not a good idea to upset @JohnBrennan bc/ he will raise an angry (& eloquent) voice. https://t.co/YgIjeKGAlp

I don’t buy it and neither does anyone with any sense out there.

Sessions said McCabe had “made an unauthorized disclosure to the news media and lacked candor – including under oath – on multiple occasions.” That pretty much says it all right there.

In McCabe’s own statement upon being fired, he blasted the President for having “politicized” law enforcement, accusing him of trying “to taint the FBI, law enforcement, and intelligence professionals more generally.” Just days before FBI Deputy Director Andrew McCabe was terminated, he threatened to “take people down with him” if he was fired. Fox News Senior Correspondent Adam Housley noted that he had been speaking with agents in the bureau. He also tweeted, “McCabe blaming Nunes and the dossier is beyond incorrect. The internal investigation took all that into consideration and much more. Ask the agents in the bureau, not the politicians and media outside of it. That’s what I did. They had a ton of stuff on him… a ton.”

Both McCabe and Comey are now facing questions on whether they committed perjury, which they of course did. McCabe is hardly the choir boy that Brennan paints him as. And Brennan is a big reason that the CIA was corrupted under Barack Obama just as the FBI was. Firing McCabe was the right thing to do and I hope it is only the beginning of cleaning out the intelligence agencies. At least Brennan is gone and good riddance.