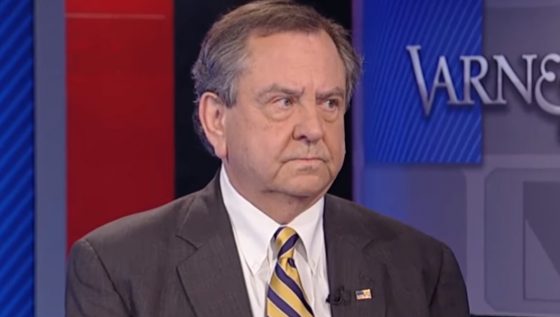 Former assistant FBI director James Kallstrom also said officials had a scheme to blame Trump for the Russian interference during the 2016 election.

Former FBI Assistant Director James Kallstrom appeared on Fox News Channel with Maria Bartiromo on ‘Sunday Morning Futures’ to discuss the firing of Andrew McCabe and other issues concerning the FBI. He dropped a bombshell… he said that “high-ranking people throughout the government… had a plot to not have Hillary Clinton indicted so that she could remain the flawed candidate that she was.” Kallstrom was in the FBI for 27 years, so what he says has weight and credibility.

Sessions acted just two days before McCabe’s official retirement would have enabled him to begin drawing a lucrative federal pension. The FBI’s Office of Professional Responsibility (OPR) recommended that Sessions fire McCabe because he reportedly lied to investigators and leaked all over the place to the media. Kallstrom suggested that McCabe was emblematic of continuing corruption among top federal officials.

“I think there’s a big sigh of relief and a good feeling about the fact that an FBI element, and organization in the FBI, recommended that he be fired, as opposed to them being mute and having someone else make that recommendation,” Kallstrom said. “So I think they’re very happy about that. And they’re just gnawing at the bit to actually get involved in a real investigation, not a phony investigation like [former FBI Director] Jim Comey conducted,” Kallstrom added.

Kallstrom said that the “plot” to fix the 2016 election goes “right to the top,” which leveled a finger right at President Obama and former CIA director John Brennan. Brennan who basically threatened Trump with a tweet after McCabe was summarily fired by Attorney General Jeff Sessions. Kallstrom cited text messages from FBI counterintelligence chief Peter Stzrok which appear to show “they had a backup plan to frame Donald Trump” as a Russian agent. “This whole thing is a total phony,” he said about the Muller probe. “How would you feel… if someone had a phony scheme about you go on for months and months and months?” I’d say that’s pretty direct and blunt and pretty much dead on.

During Comey’s tenure, McCabe oversaw the FBI’s investigation into Clinton’s use of a private email server while she served as secretary of state. Host Maria Bartiromo noted that 10 people “at the top of the FBI and the Department of Justice” have been “either fired or reassigned” over the last several months as details about the Clinton investigation and the investigation into Russia and Trump’s presidential campaign came to light.

“Obviously this is no coincidence,” Bartiromo said. “Do you think somebody was directing them, or do you think they just came to the conclusion on their own, this leadership at the FBI and the Department of Justice, that they wanted to change the outcome of the election, that they wanted to protect Hillary Clinton?” “I think we have ample facts revealed to us during this last year and a half that high-ranking people throughout government, not just the FBI, high-ranking people had a plot to not have Hillary Clinton, you know, indicted,” Kallstrom said.

He also said: “Jim Comey is not a stupid individual. I think he’s naive and has an ego the size of the Empire State Building, and he has a lot of other faults, that got him into this trouble. But I could be wrong, they could have been in lockstep. But there is no question that he, and McCabe others in the FBI, and we’ll find out the State Dept., and the National Security Advisors to the president, and John Brennan. Did you see John Brennan’s remarks?”

When the full extent of your venality, moral turpitude, and political corruption becomes known, you will take your rightful place as a disgraced demagogue in the dustbin of history. You may scapegoat Andy McCabe, but you will not destroy America…America will triumph over you. https://t.co/uKppoDbduj

“The animus and the malice against Trump is prima facie exposure of how he felt about Trump before the election,” Kallstrom said. “My sources tell me [Brennan] was leaking almost weekly or daily, and he was taking that bunch of phony crap supposedly from Russia, and peddling that through the Congress and the media, he was one of the active people. I’ve known him a long time and I think he’s involved, and quite frankly, I think it goes right to the top, quite frankly.” Oh, and I hope and pray they nail Brennan in all this.

Bartiromo asked, “To President Obama?” “It goes right to the top, and it involves that whole strategy. They were going to win [the 2016 election], nobody would ever know this stuff, and they just unleashed the intelligence community. Look at the unmaskings? We haven’t even heard about that yet. Look at the way they violated the rights of these American citizens?” Kallstrom explained. “I hope Gen. Flynn sues a lot of people, because he was handled so bad… He didn’t lie to the FBI. They didn’t even interview him about a crime. He was in his legal authorized mode when all that happened,” he said.

“They are the people who committed felonies, not the General. They’ve ruined [Flynn] – and because they threatened his son, you know, they bankrupted this guy that gave his life to this country. Just the whole dealings. Look how they dealt with the IRS? There are so many things they have done badly.” I’m no fan of Flynn, but his constitutional rights were violated and he was railroaded. Yes, he’s been involved with the Russians… I think he’s a Russian plant. So get him on that, not some trumped up charge of lying that didn’t happen.

Kallstrom also said officials had a scheme to blame Trump for the Russian interference during the 2016 election. “They had a backup plan to basically frame Donald Trump and that’s what’s been going,” Kallstrom said.

Trump targeted McCabe, Comey and special counsel Robert Mueller in a series of tweets over the weekend. “As the House Intelligence Committee has concluded, there was no collusion between Russia and the Trump Campaign. As many are now finding out, however, there was tremendous leaking, lying and corruption at the highest levels of the FBI, Justice & State. #DrainTheSwamp,” Trump tweeted Saturday. “The Fake News is beside themselves that McCabe was caught, called out and fired. How many hundreds of thousands of dollars was given to wife’s campaign by Crooked H friend, [former Virginia Gov.] Terry [McAuliffe], who was also under investigation? How many lies? How many leaks? Comey knew it all, and much more!” Trump added.

Trump insisted that Mueller’s probe “should never have been started” because “there was no collusion and there was no crime.” “It was based on fraudulent activities and a Fake Dossier paid for by Crooked Hillary and the [Democratic National Committee], and improperly used in FISA COURT for surveillance of my campaign. WITCH HUNT!” Trump tweeted. Witch hunt indeed. The intelligence agencies need an enema and a reboot. Oh, and a lot of people need to go to jail over all of this, not just lose their pensions or be reassigned.

As the House Intelligence Committee has concluded, there was no collusion between Russia and the Trump Campaign. As many are now finding out, however, there was tremendous leaking, lying and corruption at the highest levels of the FBI, Justice & State. #DrainTheSwamp

The Fake News is beside themselves that McCabe was caught, called out and fired. How many hundreds of thousands of dollars was given to wife’s campaign by Crooked H friend, Terry M, who was also under investigation? How many lies? How many leaks? Comey knew it all, and much more!

The Mueller probe should never have been started in that there was no collusion and there was no crime. It was based on fraudulent activities and a Fake Dossier paid for by Crooked Hillary and the DNC, and improperly used in FISA COURT for surveillance of my campaign. WITCH HUNT!