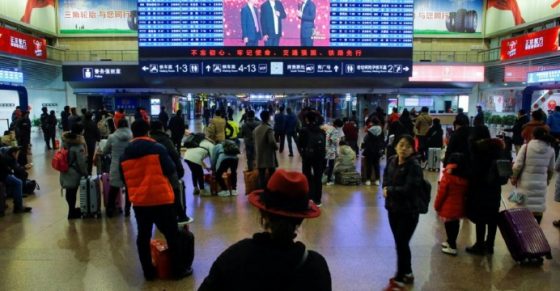 China has banned more than nine million people so far from buying plane tickets and at least another three million from buying business-class train tickets because of their poor “social credit” ratings, according to the deputy head of the National Development and Reform Commission. The ratings have also been used to deny loans and other forms of government support to more than 6,000 businesses blacklisted by the government. Two statements issued by the Chinese government on Friday confirmed that rule breakers can expect to face travel bans of up to a year. But I would bet that in some cases if not most, the bans are longer or permanent.

Under China’s new social scoring system, trustworthy entrepreneurs and individuals will be rewarded, while those who commit social misdeeds such as fraud, spreading false information about terrorism and causing trouble on flights will be discredited. You can even wind up on the blacklist for parking a bike in the wrong place or giving an insincere apology. President Xi Jinping’s plan is based on the principle ‘once untrustworthy, always restricted’, which will become effective on May 1st. Xi was just declared ruler for life… the first since Mao ruled the country. The system is expected to be fully implemented by 2020 and Xi will see it is enforced brutally and efficiently.

China’s Social Credit System is coordinated by the Central Leading Group for Comprehensively Deepening Reforms. It mashes together information gleaned from a wide variety of sources in order to give every citizen a social-credit rating. This includes data from the country’s social insurance database and the criminal records system, as well as information gleaned online. It is intended to penalize not just citizens who have failed to pay fines or taxes, for example, but also people the government deems guilty of ‘spreading false information’ and for ‘causing trouble’.

The social credit system will, according to government officials, “allow the trustworthy to roam everywhere under heaven while making it hard for the discredited to take a single step.” Everything from how well you treat your parents to what you’re buying will affect your eligibility to receive various rewards and benefits. It’s a situation played out by way of Charlie Brooker’s dark satire in an episode of Black Mirror, Nosedive. In it, the central character, Lacie, lives in a world where her social rating dictates every aspect of her life, including travel and work.

This comes as China’s government has led a concerted push to remove Internet anonymity from mobile phone and social networks so that anyone online can be identified at all times by the authorities. This is in addition to the country’s firewall, which restricts access to websites outside of China that its government doesn’t want Chinese citizens to see and use. Blocked websites include search engines, foreign media and social media websites outside of the Chinese government’s control.

China started building this system three years ago. On Friday (March 16), it was announced that travelers who use expired tickets or smoked on trains would also be put on a blacklist, according to statements issued on the National Development and Reform Commission’s website. This is the beginning of Xi’s morality crackdown in the nation. Along with this, people are being forced to display a picture of their Dear Leader somewhere in their homes.

Those found to have committed financial wrongdoings, such as employers who failed to pay social insurance or people who refuse to pay fines, would also face restrictions, said the statements which were dated March 2nd. The commission added that the new rules would come into effect on May 1st. According to a Xinhua News Agency report, the government will look to improve the mechanism to ensure that social credit records are updated in a timely fashion and disputes can be well handled. I don’t think anyone is foolish enough to believe that horse puckey.

If you fall out of favor with the government in China, you will be walking to work or starving to death. Communists do not care. They are looking to reduce the population in the cities anyway.

The Chinese government’s Social Credit System has been duplicated in the private sector as well, with Sesame Credit, an affiliate of Alibaba’s Alipay subsidiary, controlled by billionaire Jack Ma, providing loans based on social credit ratings for a number of years already. It lends money based not just on an individual’s credit history, but also their buying habits and online social circles, and encourages users to flaunt their credit score publicly. That credit score is also shared with Baihe, one of China’s biggest online dating services, which promotes subscribers with good social credit scores with Sesame to prominent spots on its website. China’s government hopes that by adopting a combination of punishments and rewards it can keep its people in line and the Communist Party of China in power permanently.

A Wired report last year found that a user with a low Zhima Credit score had to pay more to rent a bicycle, hotel room or even an umbrella. Zhima Credit’s CEO has said, in an eerie prefiguring of the new travel restrictions, that the system “will ensure that the bad people in society don’t have a place to go, while good people can move freely and without obstruction.” This is right out of 1984. A dystopian society employing digital fascism. If you are a good communist and obey the rules, you will be favored. If not… you are expendable. Welcome to Xi’s China and their version of the Gestapo. What’s old is new again in the digital age.

Author’s Note: This is an abridged version of “The Constitution of the United States of America as a Contract ” – one of the “communiqués” from my book Communiques from the Vast Right-Wing Conspiracy. This particular communiqué discusses our Constitution from what this writer believes to be a novel perspective – analyzed as a legal contract rather than as a political document – and from that, how there has been a Progressive-driven breach of contract. The original of this communiqué includes some of the “legalese” of contract interpretation principles used in law; here I have mostly excised those and distilled to the essence of the concept. In that sense, you will find this piece not unlike Mark Levin’s new book “Rediscovering Americanism: And the Tyranny of Progressivism” (although my book was released a year before) – I say that not to brag, merely to acknowledge kinship with another who is working to warn Americans about the manifest anti-Americanism of the Progressive division of Collectivism.

The Constitution of the United States of America as a Contract

The Constitution is the guide which I never will abandon.

Don’t interfere with anything in the Constitution. That must be maintained, for it is the only safeguard of our liberties. And not to Democrats alone do I make this appeal, but to all who love these great and true principles.

To live under the American Constitution is the greatest political privilege that was ever accorded to the human race.

It is submitted to you that we could (and should?) look at the Constitution as equivalent to a legally binding contract between the people of the United States of America as one party to the contract, and the federal government as the other party.

Discussion regarding the Constitution of the United States of America typically revolves around a debate between “strict constructionists” (Conservatives and objective legal scholars) and “living document” proponents (Progressives and agenda-driven “legal scholars”). In the interest of illuminating the fundamental premise of the debate, let’s approach it from a slightly different angle – by applying legal concepts from “contract law.”

END_OF_DOCUMENT_TOKEN_TO_BE_REPLACED

Trevor Loudon will be in Arizona for the rest of March, 2018:

Please join us if you are in the area!

Markets were mixed Friday heading into this week’s FOMC meeting. White House turmoil was looked past and attention was focused on better than expected factory output and consumer sentiment.

Commenting about sentiment, confidence is now at the highest level since January 2004 with the sharpest gains coming from the lower third of the economy. Inflationary expectations are at a 3-year high of 2.9% versus the expected rate of 2.5%.

Inflation is a two part phenomenon. The first part is too much money chasing too few goods fearing higher prices tomorrow.

If inflationary expectations become unanchored, Treasury yields will rise, for such are already 1.25% to 1.5% lower based upon the historical relationship between the 10-year Treasury and real GDP. In other words, there is great confidence in the inflation fighting prowess of the Federal Reserve.

As noted above and speaking of the Fed, the two day meeting commences tomorrow. A 0.25% increase is expected. Will the Committee suggest the possibility of three more increases in 2018 for a total of four? As little as six weeks ago, the markets had not yet discounted two.

Some may immediately dismiss this outlook as politically motivated, however, it is consistent with the outlook of JP Morgan and several Federal Reserve presidents as well as former FRB Chair Greenspan. The reason for this anticipated growth by all groups… tax and banking reform including the immediate expensing of capital goods spending, as well as the acceleration of monetary velocity.

Changing topics, many times I have commented about market imbalances. Friday’s WSJ perhaps partially quantified these imbalances via the flow of funds. According to the WSJ, almost $5 billion has poured into tech focused funds this year. This figure represents half of what this group pulled in, in all of 2017. During January, the tech sector pulled in a record $3.7 billion, the greatest inflow for this sector (and any other sector) since March 2000.

The Journal reiterated that less than six companies are responsible for any 2018 S & P 500 gains. Without these gains this marquee index would be down almost into “corrective territory.” Wow!

Continuing with this theme, according to the Commerce Department, Internet sales account for about 10% total retail sales. These sales include purchases made from Walmart and any other companies that have an online presence.

One of the companies that has contributed to a large proportion of the S & P 500 advance is an online retailer. Amazon’s total sales are about 25% of that of Walmart, but Amazon is worth about three times more than Walmart. Walmart makes in a year what Amazon has made since it went public in 1997.

I ask is this sustainable? Perhaps the appropriate question is this rational given that companies are valued by corporate cashflow discounted by some interest rates? The growth rate is a minority factor in valuation formulas.

Speaking of growth, the Commerce Department states online sales grew by 9% in 2017. Overall, retail sales were up about 4.1%.

Some have stated indexing and technology based trading has created a more efficient and liquid market. I will argue it has created an imbalanced market that could be teetering like a pile of sand. What grain will cause the sand pile to topple?

Perhaps this week’s Fed meeting could be that grain of sand; the grain of sand that is really better than expected growth that generated demand pull and cost push inflation.

The Dow should open moderately lower on a myriad of fears including monetary policy, trade and political tensions, potential large privacy violations from social media companies and technical trading patterns. The 10-year is off 6/32 to yield 2.87%.