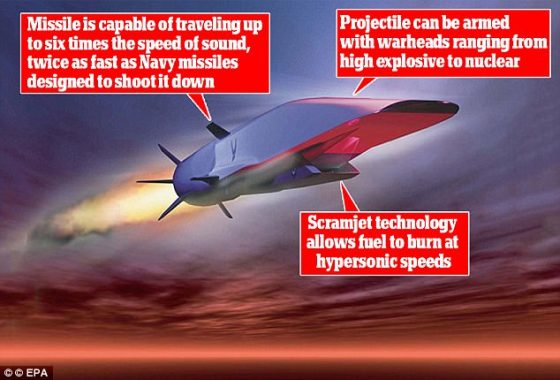 Russia and China are outpacing the United States in the development of super-fast missile technology, Pentagon officials and key lawmakers are warning. They are leaving us in the dust on this weaponry and it is a severe threat to national security.

Hypersonic missiles fly into space after launch, but then come down and fly at high speeds on a flight path similar to an airplane. Their lower trajectory makes them more difficult for U.S. missile defense satellites and radars to detect. Russia has openly stated it is developing high-speed air-launched missiles as well as underwater hypersonic drones.

“Right now, we’re helpless,” Sen. James Inhofe (R-OK), a senior member of the Senate Armed Services Committee, said in advocating for more investment in hypersonics, along with missile defense. Unfortunately, the Air Force just delayed our hypersonic bidding contract once again. Lockheed Martin (LMT), Northrop Grumman (NOC), Boeing (BA), Raytheon (RTN), or Orbital ATK, which is being bought by Northrop, are in the running for a contract to build a hypersonic strike weapon that could be launched from fighters and bombers. The contract initially was supposed to be awarded sometime in federal fiscal Q1, which began in October and ended in December. In December, the Air Force said the contract would be awarded in federal fiscal Q2, which ends on Saturday. Now the Air Force is looking at an award in early spring, said spokeswoman Maj. Emily Grabowski.

Hypersonic weapons travel at five times the speed of sound and have the potential to be the most disruptive battlefield technology since the advent of stealth. While intercontinental ballistic missiles are faster, hypersonic weapons’ combination of speed, range, maneuverability and ability to take unpredictable flight paths make them extremely difficult, if not impossible, to shoot down with today’s technology.

Gen. John Hyten, commander of U.S. Strategic Command, described a hypersonic as a missile that starts out “like a ballistic missile, but then it depresses the trajectory and then flies more like a cruise missile or an airplane. So it goes up into the low reaches of space, and then turns immediately back down and then levels out and flies at a very high level of speed.”

Last November, China conducted two tests of a ballistic missile with a hypersonic glide vehicle that U.S. assessments expect to reach initial operating capability around 2020. They have already conducted at least seven tests of experimental systems from 2014 to 2016. And I would not be surprised if the weaponry wasn’t operational far sooner than estimated. Russian President Vladimir Putin delivered a flashy state of the nation address this month to show off a bunch of new weapons, including a hypersonic missile he claimed was “invincible” against U.S. missile defenses. About a week later, Russia claimed it successfully tested a hypersonic weapon. The intercontinental hypersonic missile, dubbed Avangard, is capable of reaching targets at 20 times the speed of sound and will strike “like a fireball,” Putin said.

At the time of Putin’s announcement, the Pentagon said it was “not surprised” by the report and assured the public that it is “fully prepared” to respond to such a threat. But just last week in front of Congress, Hyten conceded U.S. missile defense cannot stop hypersonics. He said that the U.S. is instead relying on nuclear deterrence, or the threat of a retaliatory U.S. strike, as its defense against such missiles. That goes beyond foolish right into suicidal. “We don’t have any defense that could deny the employment of such a weapon against us, so our response would be our deterrent force, which would be the triad and the nuclear capabilities that we have to respond to such a threat,” Hyten told the Senate Armed Services Committee.

Hyten is advocating space-based sensors as a defense. “I believe we need to pursue improved sensor capabilities to be able to track, characterize and attribute the threats, wherever they come from,” he said. “And, right now, we have a challenge with that, with our current on-orbit space architecture and the limited number of radars that we have around the world. In order to see those threats, I believe we need a new space sensor architecture.”

Asked if the U.S. is really falling behind Russia and China on hypersonics, Thomas Karako, director of the Missile Defense Project at the Center for Strategic and International Studies, was very blunt: “Yes.” “And the reason is the U.S. hasn’t been doing anything near the same pace both in terms of developing our own capabilities but also failing to develop sensors and shooters necessary to shoot down theirs,” he continued. Terrestrial sensors are limited in their ability because of the curvature of the earth, Karako said, but “you can’t hide from a robust constellation of space-based sensors.”

Karako pointed out that the last five administrations have all identified space-based sensors as a critical need on paper, but nothing has come to fruition on it. “One of the reasons that we haven’t prioritized the hypersonic threat is we were slow to kind of appreciate not merely the Russia and China problem, but the Russia and China missile problem,” Karako said. And why is that? We’ve all known for a long time that Russia and China are our two top military threats. We also know they have been racing to develop military weaponry, especially high-tech weaponry. So, why haven’t our military tacticians figured out the hypersonic missile threat posed by these two communist regimes? In a word, Barack Obama.

The Trump administration is reversing some of this, but we are far, far behind. The National Defense Strategy and the Nuclear Posture Review focus on a “great power competition” with Russia and China. Sen. Deb Fischer (R-NE), chairwoman of the Senate Armed Services Strategic Forces Subcommittee, likewise cited them as helping the U.S. get back on track in the area of hypersonics. “I think we are aware of the capabilities that our adversaries have, and … whether it’s the Nuclear Posture Review, National Defense Strategy, these are all laid out because of the identification of the threats we have,” she said.

In addition to the nuclear review, Pentagon officials have been touting budget proposals that would put more money toward hypersonics and missile defense that they say will help close the gap with Russia and China. Hyten told the Senate Armed Services Committee that there’s $42 million in the fiscal year 2019 budget for the Air Force and the Missile Defense Agency to work on a prototype for space-based sensors. Air Force Secretary Heather Wilson, meanwhile, told the House Armed Services Committee last week her fiscal 2019 budget includes $258 million for hypersonics. Defense Advanced Research Projects Agency (DARPA) Director Steven Walker touted his $256.7 million fiscal 2019 budget for hypersonic missile development as well.

Inhofe said he’s most worried about the missile defense issue, adding there “appears to be no defense” against hypersonics. To him, the answer is reversing defense budget cuts, which Congress has taken steps to do in a two-year budget deal and a recently passed appropriations bill for fiscal 2018. “We need to make up the losses that we had during the Obama administration by putting a priority, which we are doing now, on the military,” he said. Let’s just hope we catch up in time before our enemies use hypersonic weapons against the U.S.

3 thoughts on “Russia And China Outpace US In Hypersonic Weaponry”