“U.S. ambassador to Russia Jon Huntsman has been summoned to our ministry, where my deputy Sergei Ryabkov is briefing him on the tit-for-tat steps against the U.S.,” Lavrov said, according to the state-run Tass Russian News Agency.

“They include the expulsion of the same number of diplomats and our decision to withdraw consent to the work of the Consulate General in St. Petersburg.” More here. 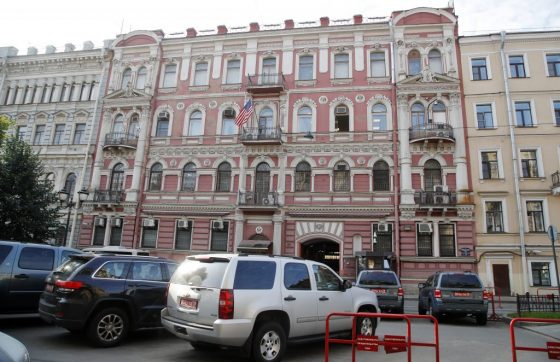 Robotics, artificial intelligence, and a willingness to strike the enemy’s non-military targets will figure in the country’s future strategies.

The U.S. military isn’t alone in its plans to pour money into drones, ground robots, and artificially intelligent assistants for command and control. Russia, too, will be increasing investment in these areas, as well as space and information warfare, Russian Army Gen. Valery Gerasimov told members of the Russian Military Academy of the General Staff last Saturday. In the event of war, Russia would consider economic and non-military government targets fair game, he said.

The comments are yet another sign that the militaries of the United States and Russia are coming more and more to resemble one another in key ways — at least in terms of hyping future capabilities. The chief of the General Staff said the Russian military is already developing new drones that could perform strike as well as reconnaissance missions. On the defensive side, the military is investing in counter-drone tech and electromagnetic warfare kits for individual troops.

The Russians are building an “automated reconnaissance and strike system,” he said, describing an AI-drive system that sounds a bit like the Maven and Data to Decision projects that the United States Air Force is pursuing. The goal, according to Gerasimov, was to cut down on the time between reconnaissance for target collection and strike by a factor of 2.5, and to improve the accuracy of strike by a factor of two. The Russian government is developing new, high-precision strike weapons for the same purpose. “In the future, precision weapons, including advanced hypersonics, will allow for the transfer the fundamental parts of strategic deterrence to non-nuclear weapons,” he said.

Sam Bendett, a research analyst at the Center for Naval Analyses, says the moves signal that the Russian military is trying to push fighting further away from its borders, thus growing the area to which it can deny access, or at least appear to do so. “Russia’s current force composition is aiming at short-range, short-duration conflict where its forces can overwhelm the adversary close to Russian borders. The new technology Gerasimov discusses would allow Russia to conduct deep-strikes within enemy territory, thus ‘pushing’ the actual fighting far from Russian borders and Russian vulnerability to Western precision-guided weapons,” he said.

What would Gerasimov hit with those weapons? In his talk, the Russian general said that enemy economic and non-military aspects of government could be on the list of potential targets. “The objects of the economy and the state administration of the enemy will be subject to immediate destruction, in addition to the traditional spheres of armed struggle, the information sphere and space will be actively involved,” he told the audience.

Says Bendett, “the use of such technologies is especially important given the type of war Moscow intends to fight. Gerasimov stated that potential adversary’s economic targets, as well as government’s ability to govern, will be fair game. Striking deep into enemy territory can be accomplished more easily by unmanned systems—whether armed with EW, various sensors or strike components … All this also depends on the Russian military-industrial complex’s ability to properly marshal the needed resources in an organized fashion in order to field this technology.”

One other explanation for the tough talk: Russia is hardly an even match for the United States in terms of either military spending or capability. The recently announced $61 billion increase in the U.S. military budget over last year’s budget (bringing the total to $700 billion) is greater than the entire Russian military budget, which sits around $46 billion. That number represents about 2.86 percent of Russian GDP. In December, Putin said that the government would “reduce” future expenditures.

“Gerasimov is, like anyone in a senior military post, a lobbyist as much as a soldier, and at a time when the Russian defense budget is going to continue to shrink, he is doing what he can both to maintain it as high as possible and also to tilt procurement away from older-fashioned metalwork — which is really a way for the Kremlin to subsidise the defence industries rather than what the military want — and towards advanced communications, reconnaissance and targeting capabilities,” said Mark Galeotti, the head of the Center for European Security at UMV, the Institute of International Relations, Prague.

According to Bendett, Russian government leaders are “hedging against impending geopolitical and economic uncertainty by trying to keep their military budget within certain parameters. The [Ministry of Defense] has been talking repeatedly about the rising share of new military tech in service of the Russian military, slowly phasing out older systems in favor of new ones. So the high-tech approach that Gerasimov outlined — space-based weapons, ‘military robots’ — is the next evolutionary stage in Russian military’s evolution to a more high-tech, sophisticated forces capable of rapid strike.”

Gerasimov also took a moment to denounce what he claimed were Western attempts to destabilize the Russian government through information and influence warfare and other subtle tactics. The charge may strike Western audiences as brazenly hypocritical given the Kremlin’s on-going attempts to sow misinformation to global audiences through social media, email theft and propaganda campaigns. But it’s an old talking point for Gerasimov.

Said UMV’s Galeotti: “At a time when the Kremlin is demonstrably worried about what it sees as Western ‘gibridnaya voina‘ [or hybrid war] being waged against it — we don’t have to accept their premises to acknowledge that the Russians genuinely believe this — he is staking out the military’s claims to being relevant in this age. And his answer, as in his infamous 2013 article, and as played out in the first stage of Zapad [the major wargame Russia executed in Belarus last summer] is that the military will deploy massive firepower to smash any foreign incursions meant to instigate risings against Moscow.”