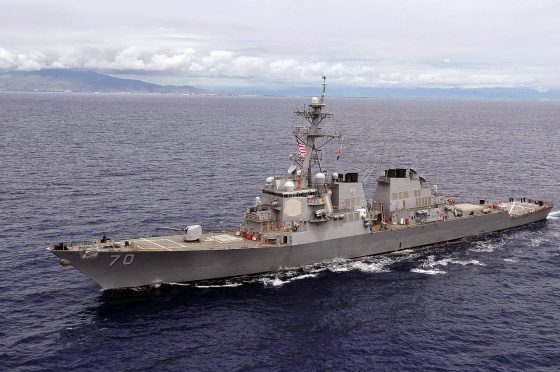 President Trump said the United States would respond within 24-48 hours. Secretary of Defense Mattis said nothing was off the table, so there goes the USS Donald Cook.

The Arleigh Burke-class guided-missile destroyer USS Donald Cook (DDG 75) departed Larnaca, Cyprus, April 9, 2018, after completing a scheduled port visit. The ship’s presence in the Mediterranean is a demonstration of our continued commitment to regional security. U.S. 6th Fleet, headquartered in Naples, Italy, conducts the full spectrum of joint and naval operations, often in concert with allied and interagency partners, in order to advance U.S. national interests and security and stability in Europe and Africa.

The US and Russia have traded barbs at a UN Security Council meeting on the alleged chemical attack in Syria.

Russian envoy Vassily Nebenzia said the incident in Douma was staged and that US military action in response could have “grave repercussions”.

US Ambassador Nikki Haley said Russia had the “blood of Syrian children” on its hands.

US President Donald Trump has said “major decisions” on Syria will be made in the next two days.

Ms Haley said that if the UN Security Council acts or not, “either way, the United States will respond”.

Washington has not ruled out military strikes. In April last year, the US fired cruise missiles at a Syrian airbase after a Sarin attack on the opposition-held town of Khan Sheikhoun killed more than 80 people. More here. 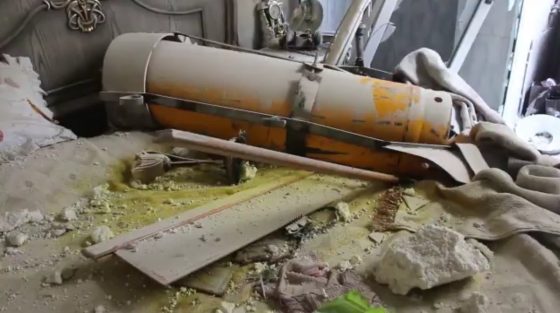 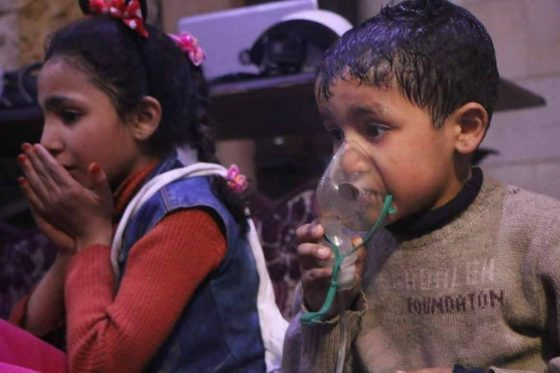 The information, based on data from seven sources, shows that the Syrian government is responsible for the majority of 85 confirmed chemical weapon attacks. The data also show that the Syrian government has been largely undeterred by the efforts of the United Nations Security Council, the international Organisation for the Prohibition of Chemical Weapons (OPCW), and unilateral action by individual countries to enforce the prohibition on Syria’s use of chemical weapons.

“In Syria, the government is using chemical weapons that are banned the world over without paying any price,” said Lama Fakih, deputy Middle East director at Human Rights Watch. “One year after the horrific sarin attack on Khan Sheikhoun, neither the UN Security Council nor the Organisation for the Prohibition of Chemical Weapons has acted to uphold the prohibition against chemical weapon attacks.” 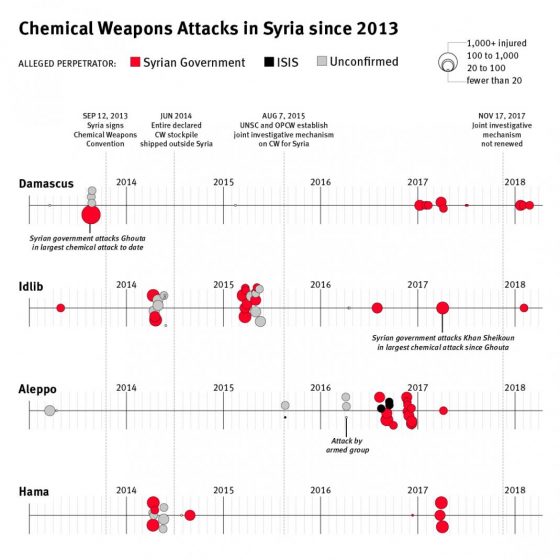 U.S. military planners have drawn up more than one option for possible military action against Syria, including a strike similar to last year’s attack in which 59 sea-launched cruise missiles inflicted heavy damage on a Syrian Air Force airfield in Homs.

Pentagon officials, speaking on condition of anonymity, said the options now are similar to those presented to President Trump after last year’s chemical attack in northern Syria that killed and injured hundreds of civilians, including women and children.

But officials said the president could decide to choose a more robust option this time, given that Syrian President Bashar Assad didn’t seem to get the message last time.

“While the process of drawing up and presenting the options are similar to last year, I wouldn’t look at this through a soda straw,” said one official familiar with the planning. “It’s up to the president to decide how to respond. It’s up to us to provide the options.”

A Navy source said the U.S. has a number of ships armed with Tomahawk cruise missiles in the region, including the USS Donald Cook, a guided-missile destroyer that has just completed a port call in Cyprus, and got underway in the eastern Mediterranean within range of Syria Monday. More here. Yes, at first glance the title of this piece appears to be provocative (indeed, some probably stopped there and refused to continue reading).  However, it is provocative only under two conditions. First, it is provocative when viewed within the frame of reference to which we’ve become conditioned – that is, that Progressivism and religion are examined as totally separate and distinct topics, a conceptual version of the so-called “separation of church and state” if you will. Second, it is provocative if this writer had deliberately crafted it just to get a reaction.

Alas, neither condition applies. The title’s question is a serious one, and this piece makes a case for concluding that “yes, ‘Progressivism is Satanic.’”  Regarding that conclusion, a reader’s skepticism at this stage is expected, if not encouraged.  We’ve become accustomed (conditioned?) to regard Progressivism (nee Liberalism) as one of the two major political leanings and, something akin the “other” team in a sports league, vying against the Conservatives for seasonal victory and the electoral championship.  But what if Progressivism is not just a political preference, but instead originates from a more powerful and sinister source – and carries with it the existential danger that origin implies?  After all, if Satan is the great deceiver, would not political and cultural movements that appear to be secular in origin,  actions and goals serve his purposes?  Would not (secular) politics and culture be natural (if not inevitable) avenues for advancing his aims?  Indeed, since his followers are by definition unbelievers, then is not some sort of secular “faith” and “church” indispensable for harnessing humans to advance his evil aims?

Yes, we are dealing with intangibles – we cannot see “good” or “evil,” or God or Satan, or “heaven” or “hell” – but we can look for signs and clues, and infer from what we find.  We all already do it – atheists, agnostics and believers have all pondered question(s) regarding the existence of God, but landed upon different conclusions.  So for those who believe, and for all who have an open or even skeptical mind, does it not follow that once the question is raised, examining Progressivism to identify its actual origin and intentions is warranted?  And for those of us inclined to oppose Satan and evil, is this not the prerequisite step to undertake if we are to have any hope of countering that force?  Yes! So together, even if you approach with skeptical mind, let us consider the evidence about to be put before you.  Shall we proceed?