By: James Simpson | The Daily Caller

Antifa groups used information from the Southern Poverty Law Center to successfully shut down four conferences on the threat of Islam scheduled in Wisconsin and Minnesota last weekend.

The hotels slated for the events were flooded with threatening calls, and the organizers voluntarily canceled one of the events following numerous warnings that it would not be safe. A fifth conference in Des Moines, Iowa carried on in defiance, despite leftists showing up to disrupt the proceedings.

The conferences were hosted by Worldview Weekend, a conservative Christian organization that produces radio and TV shows and sponsors events nationwide. The SPLC posted the locations for these venues, after which Antifa groups urged their members through social media to attend events and swamp the venues with threatening calls and messages.

According to Worldview CEO Brannon Howse, a state trooper even visited the Minneapolis hotel where an event was planned for Sunday. He said the police were concerned about conference security and the organizer should add more police. With the financial losses from other canceled events, Howse said they could not afford to provide more security than those already hired, and cancelled that last event out of safety concerns.

The conferences sought to expose how leftists supported by George Soros, the John Templeton Foundation and other donors are intimidating America into silence by labeling anyone who exposes them as “racists,” “Islamophobes” and “white supremacists.” An event last fall featuring this author and DHS whistleblower Philip Haney was canceled by the venue following a similar campaign from Council on American-Islamic Relations (CAIR) operatives. A second event in Illinois went on despite threatening calls to the organizer, her employer and the event location.

One of the conference speakers, John Guandolo, is listed on an SPLC list of “anti-Muslim extremists.” Guandolo is president and founder of Understanding the Threat. He is a Naval Academy graduate, a combat veteran Marine officer, a former FBI special agent who created the first government trainings on the Muslim Brotherhood and its U.S. operations, and was recruited by the Department of Defense to provide strategic analysis regarding these threats.

According to Guandolo, UTT is the only organization that provides tools for leaders, elected officials and law enforcement to map out and investigate jihadi networks. “I teach and train about the things that energize the jihadis (Sharia), and the networks that support jihad and the jihadis. This is primarily the Muslim Brotherhood, of which CAIR, an unindicted co-conspirator in the Holy Land Foundation terror financing trial, is a prominent part. The Muslims themselves say they are motivated by Sharia (Islamic law),” he said.

The following are a few of the Antifa Facebook postings that targeted the events in reaction to SPLC’s announcement: 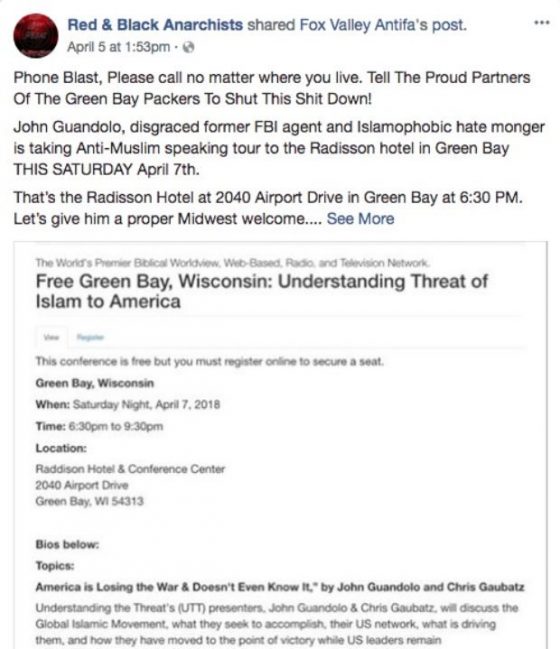 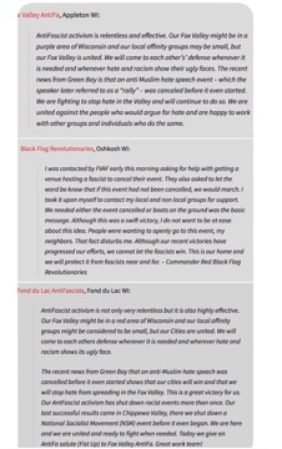 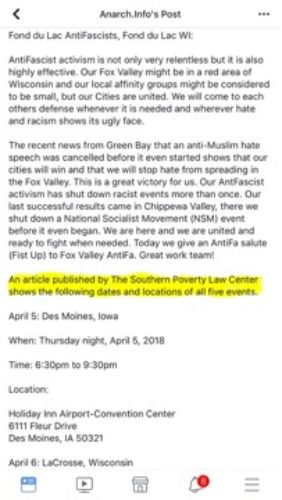 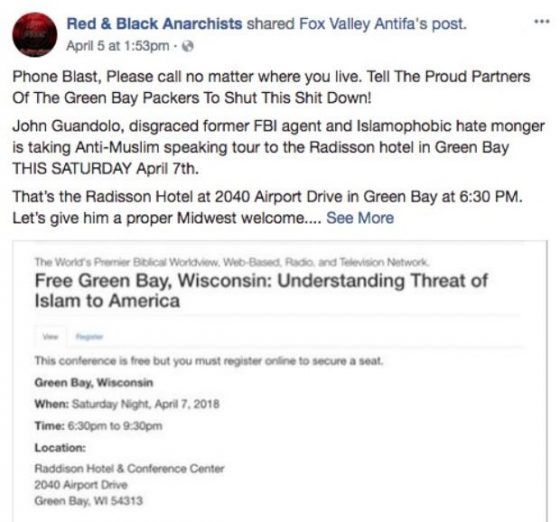 The general manager at the Radisson Hotel Green Bay, who was referenced in the “Red & Black Anarchists” post, sent the following email notifying Howse that he was canceling that event two days before it was to occur:

Should you have further questions about this, please reach out to me directly.  My email is [REDACTED] or my work number is [REDACTED]

Congratulations were not limited to Antifa groups. For example, below is the text of an email sent out by a group called Wisdom Wisconsin that also references the SPLC: 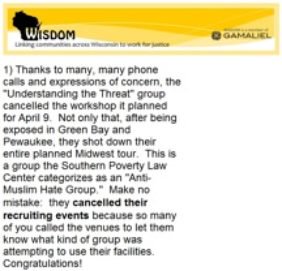 Among other things, protesters claim that Howse is just out to make money. But Howse said events like these cost tens of thousands of dollars to put together, but are free to the public.

“This is a public service provided to American citizens because we are concerned for the future of America,” Howse told The Daily Caller. “We pay the costs for renting the facilities, advertising the events in local markets, printing flyers, bringing in speakers — including airfare, car rental, hotel, speaker fees and other expenses — and charge nothing for the events. We do try to recoup some of these costs through book sales and voluntary donations, but it is never enough.”

According to Howse, a combined total of at least 3,500 people had registered for the four canceled events: more than 1,500 in Minneapolis and another 2,500 in the three Wisconsin sites. The cancellation of these events cost well over $60,000, Howse said.

“And that doesn’t include lost ad revenues and other opportunity costs,” he told TheDC. “We promoted these events for the past six months, including 40,000 mailings in December and another 40,000 in January, and used up valuable staff time that could have been spent on other endeavors.”

The hotel manager at the Des Moines event told TheDC that the hotel does not have a litmus test for events. “We rent facilities to groups with a wide variety of opinions and interests across the spectrum politically, philosophically and otherwise. Our goal is to see that each of them receive the highest quality of service we can provide,” he said.

The manager said that protesters showed up and did all they could to disrupt the proceedings without pushing it far enough to get thrown out by police. Howse said that when he handed out brochures intended for the audience, one protester snatched the whole stack and put it in his backpack. He was forced to return the brochures when approached by the police. These attendees were described as “rude and intimidating.”

One person who did get asked to leave was Jack Gunnar Schuler, a local high school teacher. According to the Des Moines Register, Schuler is a transgender activist who was born a woman named Elyse, but since April of 2016 now identifies as a man. He also claims to have been a Marine, but his Facebook profile photo shows him wearing an Army T-shirt — something a Marine is very unlikely to do.

Schuler had been walking around the event snapping photos of everyone in attendance, posting more than two dozen of them on Facebook, with disparaging comments about the attendees.

Activists associated with Antifa often use this strategy to publicly intimidate, shame and threaten their political opponents.

Schuler walked up to Guandolo and said, “I think you’re a f**king disgrace. You’re an absolute disgrace to the Corps and the uniform.”

Schuler was immediately escorted out by police. He videoed the whole encounter. It has since been scrubbed from his Facebook site, but you can watch it here (language warning).

Howse was suspicious of Schuler and asked if he was carrying a gun. Shuler snapped a picture of Howse and posted it on Facebook with the comment, “This guy asked me if I had a gun in my bag. Remember kids. The second amendment is only for white people to use against brown people.”

Two prominent Muslims came to witness the event: CAIR-Iowa chapter president Abshir Omar and State Rep. Ako Abdul-Samad. Omar is a Somali Muslim refugee and member of the Democratic Socialists of America who was supported by CAIR in his unsuccessful 2016 bid for Des Moines City Council. Abdul-Samad has been praised by CAIR, and is also a current member of the Black Panther Party’s Des Moines chapter.

Samad was critical of the event’s message, telling WHO TV that the term “jihad” is misunderstood. “The Jihad that we talk about in the Quran, prophet Muhammad, peace and blessings be upon him, said very clearly that the Jihad is the Jihad of an-Nafs, which means the Jihad of self. You’re [sic] Jihad is within you and every religion has a Jihad.”

Asked for a response by WHO TV, Guandolo said, “That’s absolutely not true. In Islam, there’s only one legal definition for Jihad, and that’s warfare against non-Muslims.”

Shahram Hadian, a former Muslim and now Christian apologist who heads the Truth In Love project, was slated to speak at a number of the canceled events. He reacted strongly in a video about the cancellations posted on Saturday:

“Who shut us down folks? The Islamo-Marxist-Fascist oppressors in this nation, the same groups that we’ve been traveling around this nation warning you about…. How did that happen? It started with CAIR… the front group for the Muslim Brotherhood. Then they’ve joined with the Southern Poverty Law Center… Then they got Antifa involved… and we know their M.O. – they’re domestic terrorists… If you think we are living in a free nation any more… that this is the land of the free and home of the brave, we better wake up soon. Religious liberty, the right of assembly, the right of our speech, is gone. This is the M.O. now. This is the tactic they are using to shut us down.”

Howse broadcast an hour-long live special Sunday night to describe what happened and the issues that would have been covered in these events.

He said he is considering legal action, among other options, and that he will also be releasing a movie this fall recounting this weekend’s events and many others he has witnessed over the last 12 months.

“The things that are happening represent an existential threat to our rights as Americans and our very way of life,” he said.

First quarter earnings season commences today with the release of several large money center results. S & P 500 profits are expected to increase by 18.4%, the greatest gain in seven years because of tax cuts. To write the incredibly obvious, market volatility could increase by any significant surprises.

Commenting about volatility, equities were posting modest gains on speculation that tensions in the Middle East won’t escalate into a destabilizing conflict. Equities gain further impetus following headlines that Trump weighs rejoining TPP and the Administration’s increasing confidence the trade issue with China will be resolved.

Commenting about oil… oil closed higher by 0.5% and is up about 7.5% for the week. Crude stands at the highest level since December 2014 and for the first time in many years a small geopolitical premium is now becoming embedded in oil prices. Will this premium increase?

Yesterday, weekly jobless claims were released. Claims are now under 300,000 for a record 162 consecutive weeks, the longest stretch on record dating back to 1967. Many are perplexed that wage gains remain muted. I will argue a major reason for the lack of wage pressure is the labor participation rate of 62.9%, considerably lower than the 35-year average of 65.5%. It peaked in January 2000 at 67.3%.

There is wage pressure on either end of the labor spectrum, but not in the middle. I believe if the LPR increases closer to its long term average, overall wages will increase.

The Dow should open nominally higher. The 10-year is unchanged at 2.84%.