In a world that nearly demands “Political Correctness”, what politician would make statements that they understand the dangers of Sharia crimes; will take steps to educate their administration, the law enforcement under their jurisdiction, and anyone who is charged with handling abused women & minors or adjudicating laws affecting them?  Wouldn’t that be a step that could hurt their elect-ability?   If you side with “Political Correctness”, you would probably agree.   Those of us that have raised the flag of concern, asked the hard questions of our candidates, and demanded they know the threats from Sharia are real would applaud whoever this candidate is, stand with them and push for that candidate’s election!

So, who is that candidate that took that “brave” stand?

Michigan’s current state Senator, Patrick Colbeck, representing Michigan’s 7th district.  He is running for Governor of Michigan in the 2018 elections. One of his potential opponents is a Sharia-compliant Democrat candidate Abdul El-Sayed.  Senator Colbeck  has studied and learned the history of Sharia, the Muslim Brotherhood, and their plan to take down America called  “An Explanatory Memorandum On the General Strategic Goal for the Group In North America, created 5/22/1991” [Arabic/English].  He not only studied it, he has seen it happening as a sitting State Senator and within his own community.

Now, it’s the next step that makes this candidate so incredible.  He not only took the time to educate himself about the threats, he stood before a MI community and presented what he learned, told them that he (if elected Governor) would stand against the threat of Sharia.  Would demand his state is educated about what is an essential requirement to follow an ideology that states Sharia is the only “law of the land”.

Candidate for Governor, Patrick Colbeck, told the citizens of Michigan he will do all he can to protect them from an ideology that requires the replacement of Constitutional law and sanctions crimes against women and children. He also signed a pledge to confirm he will do this.  This is a candidate that will go against the “status quo” to protect and defend!

The videos with this article are the proof of his commitment.  Please share this story and the videos to let everyone see the strategic importance of Patrick Colbeck’s candidacy for governor of Michigan, no matter where they reside in America.

The Pledge that was signed: 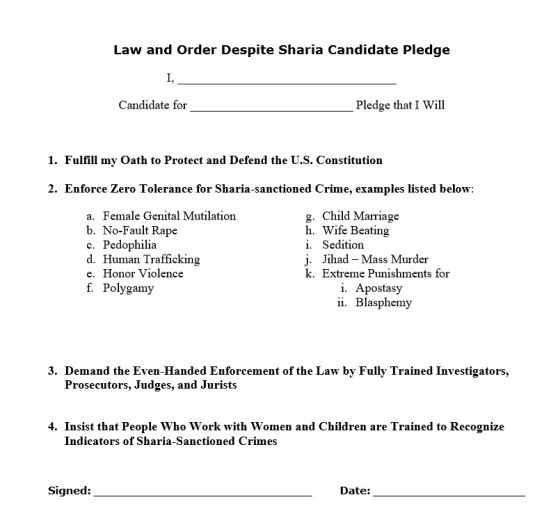 Rally in support of the Hammonds

A petition is circulating to pardon two good men: Steve and Dwight Hammond, who continue to sit in prison because radical environmentalists hate ranchers.

“​For decades agencies of the Department of Interior, namely the Bureau of Land Management (BLM) and U.S. Fish and Wildlife Service (USFWS), have deployed their administrative powers to punitively regulate and maliciously prosecute the Hammond family of Oregon in a thinly veiled attempt to drive them off their ranch, their historic grazing allotments and vested water rights.”

A good summary of this case can be found in the video below.

A 3.0% 10-year Treasury is again in view. To remind all, about two months ago the prospect of this benchmark was almost a certainty after a relentless climb from 2.4% at the start of the year. But a retreat ensued sending the 10-year as low as 2.72% in early April. Today, the yield is 2.92%, the highest in about eight weeks.

The accepted reason for the increase is greater than expected growth and inflationary pressures. I would like to add another… the massive impact of electronic based trading. The SEC states 99% of Treasury trading is done electronically utilizing algorithmic models.

I believe the next market crisis will not be an economic crisis, but rather a liquidity crisis. Liquidity is virtually absent given the changes in capital requirements and the inability of money center banks to take risk… aka hold inventories.

The regulatory entities are more concerned about speed of execution and risked based capitalization. Treasury trading has morphed electronically, which emphasizes speed, but not capitalization. What happens if there is a systemic event that causes a dramatic change in economic or monetary assumptions?

Liquidity is absent and prices could fall dramatically.

What are the odds 2018 will be the inverse of 2008, but only on steroids given the lack of liquidity?

As noted many times, oil is at the highest level since December 2014, an environment few thought would unfold. Steel, aluminum, copper and lumber prices are surging, another unexpected event. Will demand pull inflation morph into cost push inflation?

Like many, I believe the secular bond bull market is over. However, I believe few have experienced a selloff in prices given that last one took place over 24 years ago. I read a statistic that average tenure of a bond trader is about 7 years and the number of bond professionals have dropped by over 60% because of technology; technology that I will argue does or cannot factor a systemic event.

As written before, it is all about speed of execution and market stabilizing forces are no longer available because of the long arm of government.