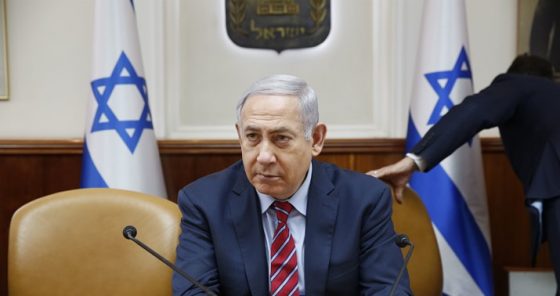 Israeli Prime Minister Benjamin Netanyahu gave a speech this afternoon from Israeli military headquarters in Tel Aviv and in it he revealed that Israeli intelligence had acquired tens of thousands of files, which, he said, proved that Iran had lied about its nuclear weapons program. Of course, Iran immediately trolled Israel calling Netanyahu the little boy who cried wolf and accused him of lying, but we all know who the liar is here and it’s not Netanyahu.

The Knesset — the Israeli Parliament — voted after Netanyahu’s speech on Monday in favor of a bill that would allow the prime minister to declare war with only the defense minister’s approval, in extreme situations. A declaration of war had only previously been done by the security cabinet.

The files are said to reportedly prove that Iran has been secretly continuing its program under the nose of international inspectors. Would any sane person out there doubt this for even a second? Netanyahu said that “100,000 files right here prove that they lied” and that “the nuclear deal gives Iran a clear path to an atomic arsenal.” It is believed that President Trump will pull us out of the Iranian nuclear deal and soon… this should give it a nice push. In fact, President Trump stated after Netanyahu’s press conference that he was right about Iran.

Netanyahu said the files that Israeli intelligence had obtained came from a storage facility for the files on the nuclear weapons program in the Shorabad district in southern Tehran. The Israelis managed to get 55,000 pages of documents and another 55,000 files on 183 CDs. The originals are now in a “very safe place,” Netanyahu assured anyone watching. I have no doubt of that and kudos to the IDF and Mossad for doing excellent work once again.

All of which is true and brutally obvious. This speech came just a day after Netanyahu met with newly sworn-in Secretary of State Mike Pompeo. After the meeting, Pompeo said that he was concerned by Iran’s “destabilizing and malign activities.” I’m sure he is, I know I am. Pompeo also said that the United States remains “deeply concerned about Iran’s dangerous escalation of threats towards Israel and the region. Iran has only behaved worse since the deal was approved.”

The timing of the speech is very interesting as well:

The explosions following the strike registered as a 2.6 magnitude earthquake by the European Mediterranean Seismological Center, but the weapons used did not cause the quake. Over 18 people were killed and another 60 were wounded, Sky News Arabia reported citing regime media…

According to some reports the target in Hama, an army base known as Brigade 47, was an underground missile production facility and depot for surface-to-surface missiles funded by Iran and built with the help of North Korea.

That’s an awfully big boom, suggesting that the strike did indeed hit a weapons depot of some sort. Israel reportedly informed the U.S. and Russia after the attack that if Iran uses Syria to stage attacks on Israel, the IDF and IAF will hit back at Iran itself. What’s the connection, if any, between the missiles targeted last night and the nuclear news Netanyahu is set to reveal today? Does he think those missiles were meant to carry nuclear payloads, giving Iran the ability to launch a nuclear attack on Israel from two fronts?

And what does this mean for U.S. negotiations with North Korea? Bad enough that Pyongyang had a hand in helping Iran build the missiles that were targeted, but the White House tearing up a nuclear treaty it had agreed to with a foreign power just a few years ago and taking a newly hostile stance isn’t going to give Kim Jong Un confidence that any deal he reaches with the U.S. will be solemnly followed by Washington. Stay tuned.

This deal has been a massive mistake from the beginning and everyone knows it. Obama gave Iran everything they wanted and more, including billions of dollars for nothing in return. It was beyond a ‘mistake’. It was treasonous. It paved the way for Iran to have nuclear weapons and to fund terrorists across the globe. President Trump has until May 12th to get us out of this disastrous deal and start dealing with Iran as the enemy they are. War drums are getting louder and we are close to all out war with the mullahs at this point.

I heard this afternoon that Iran is in fact about to pull out of the deal themselves. “The Iran nuclear deal is no longer sustainable for Iran in its present form, without regard to a US exit,” Araghchi stated Monday, according to the Iranian Students News Agency.

In a phone call Sunday, Iranian President Hassan Rouhani told French President Emmanuel Macron that Trump had already “violated” the nuclear deal by “criticizing” it. Rouhani claimed that the criticism created “fear and ambiguity” and hurt Iran’s economy. That’s insane and a monstrous lie. Trump has repeatedly criticized the deal and with good reason. Trump has said that the deal was “insane. Ridiculous. It should have never been made.” That’s exactly right.

As my friend Denise Simon said this afternoon, “Now we understand the visits to the Trump White House from foreign leaders. The timing of the Netanyahu speech, hours after a suspected Israeli strike that likely used bunker-busters capable of hitting Iran’s nuclear facilities, after Secretary Mike Pompeo’s visit and days before Trump’s May deadline is certainly interesting.”

“When Secretary Mattis spoke to Congress last week regarding Iran, the wars drums are beating due to Iran, Hezbollah and Israel. Newly confirmed U.S. Secretary of State Mike Pompeo just left Israel and has departed Jordan, his last stop bound for home to his office to which he has not yet visited since his confirmation as Secretary of State. The discussions were the presentation Prime Minister Netanyahu was about to deliver to the world about Iran and the nuclear program shrouded in lies.”

Pompeo on Sunday ratcheted up the Trump administration’s rhetoric against Iran and offered warm support to Israel, and Saudi Arabia, in the standoff with Tehran. “The United States is with Israel in this fight,” Pompeo said. Let’s hope President Trump does the right thing here and scraps the Iranian nuke deal.

BREAKING: The boy who can't stop crying wolf is at it again. Undeterred by cartoon fiasco at UNGA. You can only fool some of the people so many times. pic.twitter.com/W7saODfZDK

#BREAKING: “It is a huge cache of documents captured by Israel, proving Iran has deceived the world with respect to its nuclear program.” https://t.co/jSHFsP6efC

#BREAKING: Abbas Araghchi, Iran's deputy foreign minister, says "The Iran nuclear deal is no longer sustainable for Iran in its present form, without regard to a US exit." (@dpa quoting ISNA news agency)

Iranian deputy foreign minister Abbas Araghchi says nuclear agreement "unsustainable" regardless of whether or not the U.S. withdraws, notes that Iran is "preparing all necessary options for any scenario." (Haaretz)

.@POTUS on Iran deal: “We’ll see what happens…On or before the 12th, we’ll make a decision.” pic.twitter.com/AudPB4B1Vo

Israel shared the Iranian files with the U.S.
And the U.S. verified the material as authentic, I'm told. @netanyahu @IsraeliPM