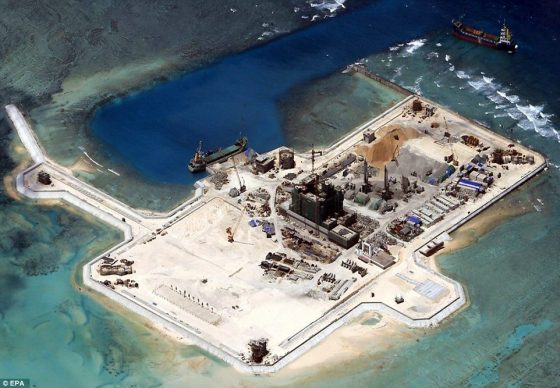 So, we cannot deny that Russia has been quite aggressive against the United States and our allies and that it goes beyond the conflict in Syria and hacking. Russian spy ships cruise our coastlines, Russian fighter jets buzz our aircraft and Russian mercenaries from the Wagner Group attack our forces. Russia also encroaches on other countries and successfully annexes them such as Crimea and the Ukraine.

So, what about China?

Well, there are those disputed Spratley Islands, claimed by several countries where China has taken full control. Now those islands, which are part of one the largest maritime shipping channels in the world, are weaponized and fortified by China with cruise missiles and surface to air weapons platforms. China is well known for hacking, successful industrial espionage and intellectual property theft.

The placement of the defensive weapons also comes on the heels of China’s recent South China Sea installation of military jamming equipment, which disrupts communications and radar systems. By all accounts, the new coastal defense systems represent a significant addition to Beijing’s military portfolio in one of the most contested regions in the world.

The defensive weapons have also appeared in satellite images of Woody Island, China’s military headquarters in the nearby Paracel Islands. More here.

As the Chinese have a military base just one mile from the American base in Djibouti, at least ten nasty encounters by the Chinese against American aircraft have been recorded. So, the Pentagon has filed a demarche. 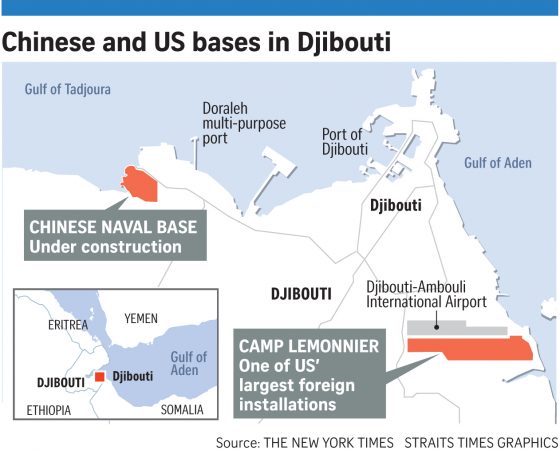 In a press briefing Thursday, Pentagon Chief Spokesperson Dana White told reporters that the “very serious incidents” had resulted in “two minor injuries,” noting that Chinese laser use “poses a true threat to our airmen.” White said the U.S. has asked China to investigate laser use in the area. “It’s a serious matter. And so we’re taking it very seriously,” White explained. “We expect China to investigate it thoroughly.”

Camp Lemonnier is the only permanent American base in Africa and is home to around 4,000 troops. Opened in 2001, the installation has become a vital staging point for U.S. counter-terrorism operations, especially as a regional hub for American drone missions launched from a network of other nearby bases. Initially an 88-acre base, an agreement was signed with the Djibouti government in 2006 to expand the facility to 500 acres.

Chinese military observers told the Post that China’s laser use may be trying to scare off birds near its airfield or disrupting spy drones flying above, rather than targeting foreign pilots. Analyst Zhou Chenming told the newspaper, “The Chinese and U.S. bases in Djibouti are really close, so one could disturb the other if the two sides don’t have a proper communication mechanism.”

*** But hold on…Tucker Carlson presented a handful of key questions to Senator Marco Rubio. The answers were terrifying.