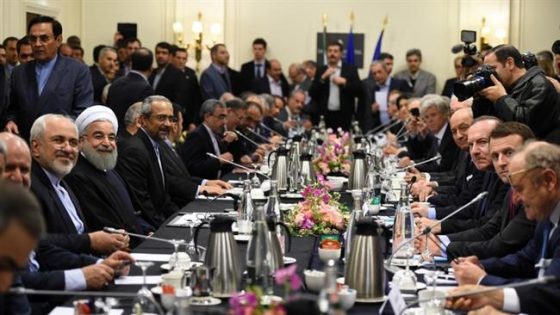 1. Why does France want to keep the Iran nuclear deal? “French exports to Iran for the first 11 months of 2017 rose 120% to €1.29 billion ($1.6 billion) and imports grew 80 % to €2.16 billion,” Celestin-Urbain said.“The short-term priority was to keep trade simple and complete a scheme this year to offer euro-denominated credits to Iranian buyers of French goods,” he said, a move that would keep bilateral trade outside the reach of US sanctions.

The head of state-owned investment bank Bpifrance, which is putting the plan together, said he was confident the scheme, which had a pipeline of deals worth €1.5 billion, could start operating by end-May or early-June. However, he warned that talks were ongoing on how to protect French firms if the US snapped back sanctions.

2. The U.S. government wired $848,000 to Iran in July 2015 to settle a dispute over fossils and architectural drawings now in Iran’s possession.

3.The U.S. also wired $9 million to Iran in exchange for 32 tons of heavy water.

4.There is some chatter also about $400 million relating to the freedom of a U.S . spy. (likely part of #2) also came from the New York Federal Reserve and was converted to Swiss Francs.

5.The $1.7 billion that went to Iran traveled through a network of the New York Federal Reserve and several European banks. This money was then transferred to the Swiss bank, converted to Swiss banknotes and moved to the Swiss National Bank. The U.S, government then transported them to Geneva via a flight bound for Iran. The transactions out of the U.S reserves were three separate transactions. At the same time there was a large hostage exchange. Iran released 4 American hostages. The Dutch Central Bank was also instrumental in facilitating the $1.3 billion into Euros. These monies appear to all be spent on the export of terror, supporting Bashir al Assad of Syria and keeping the Houthi rebels armed in Yemen.

Afghahi, 72, was arrested in California in April and faced charges for allegedly violating the Iranian embargo and money laundering.

He was the managing director and part owner of Tehran-based Faratel Corporation and the minority owner of Houston-based Smart Power Systems, according to a grand jury indictment filed in federal court in Texas in April.

He was accused of participating in a scheme to illegally export high-tech microelectronics as part of an “Iranian procurement network operating in the United States,” the Justice Department said after his arrest.

He had pleaded not guilty and the case had not yet gone to trial, attorney David Gerger said. A pardon was handed to him at 4:30 a.m. Sunday, allowing him to be released from prison after nine months behind bars, according to his attorney.

Gerger described his release as “the right result,” adding that his client is now spending time with his family.

“He is a good man,” Gerger said, “and we are glad to put this behind him.”

Faridi, of Houston, was vice president of Smart Power Systems and was accused of participating in the alleged scheme. In a statement released at the time of the indictment, an FBI official said such microelectronics shipments could put national security at risk.

“The proliferation of sensitive U.S. technologies to Iran and the direct support to their military and weapons programs remains a clear threat to U.S. national security,” said Randall Coleman, assistant director of the FBI’s counterintelligence division.

Faridi’s attorney told CNN affiliate KPRC that his client never posed a threat to the country.

“He’s as American as anybody that was born in this country. He’s loved being here, he’s fought hard to be here and he’s going to stay here, so it’s been very stressful to him to be accused of being somebody who’s a threat to national security when he’s just as American and patriotic as anybody in this town,” attorney Kent Schaffer said.

He faced charges for allegedly violating the Iranian embargo and money laundering. The case had not yet gone to trial. He was pardoned on Sunday as part of the deal.

Mechanic, the majority owner of Faratel and Smart Power Systems, also was accused in the same alleged scheme. He faced charges of violating the embargo and money laundering, among other counts.

Attorney Joel Androphy told CNN that Mechanic, Faridi and Afghahi were met by their wives after their release and headed to their homes.

“They were ecstatic to be out,” he said.

The attorney told KPRC that his client eventually plans to return to Iran.

Androphy told Forbes the accusations against his client were baseless and he believes they would have won if the case had gone to trial.

Mechanic was pardoned on Sunday as part of the deal.

The 30-year-old Iranian national pleaded guilty in December to charges of wire fraud and unauthorized access to computers, the Department of Justice said.

He was arrested in Turkey in November 2013 and extradited to the United States last February.

According to a plea agreement, he conspired to hack the network and computers at Arrow Tech, an engineering consulting and software company in Vermont.

His lawyer did not immediately respond to a request for comment.

The naturalized U.S. citizen, who lived in Potomac, Maryland, was convicted in 2013 of conspiring to illegally provide satellite services to Iran, federal officials said at the time.

He was a mechanical engineer with science and engineering degrees from George Washington University. Prosecutors argued he’d broken the law by helping Iran launch communications satellites.

He was sentenced to eight years in prison in 2013. That sentence was commuted as part of the deal.

His lawyer did not immediately respond to a request for comment.

A naturalized U.S. citizen, Ghahreman was convicted in April of violating U.S. export and money laundering laws as part of a scheme to buy marine navigation equipment and military electronic equipment for illegal export to Iran.

He was sentenced to six-and-a-half years in prison last August. That sentence was commuted Sunday as part of the deal.

Attorney Ellis Johnson said Ghahreman and his family were extremely relieved after his release.

“He plans to spend some time with his aunt and her family on the East Coast, reunite with his girlfriend who’s currently on the West Coast, and hopefully visit his elderly parents in Iran, whom he hasn’t seen in years since this case began,” Johnson said.

Ghahreman, the attorney said, is a “kind, considerate man who poses no threat to the United States.”

A federal jury in convicted Saboonchi, who holds both Iranian and U.S. citizenship, in August 2014 of conspiracy and seven counts of exporting American manufactured industrial products to Iran.

He was sentenced to 24 months in prison last February. That sentence was commuted Sunday as part of the deal.

In a written statement, his attorneys described Saboonchi as a “hard-working family man and American” who poses no danger and “has a bright future ahead.”

“He was born in the U..S and is proud to be raising his young family here. His arrest and incarceration were devastating to his many friends and family,” attorneys Elizabeth Oyer, Lucius Outlaw III and Meghan Skelton said. “Ali is thrilled and grateful for his release and return to his family.”