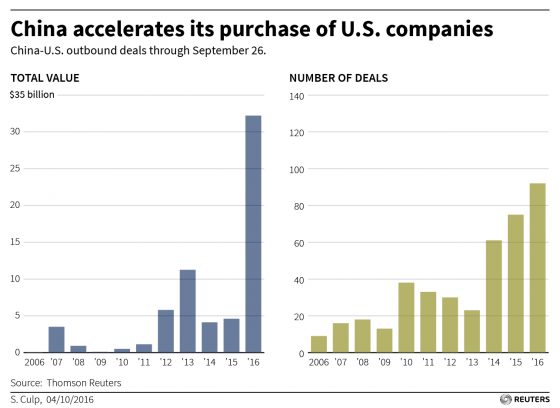 When China is not buying America, they are busy in other parts of the globe buying places like Europe. That is how China is expanding, including stealing intelligence, espionage and hacking. The parts of Britain not owned by Russia are being gobbled up by China. Russia has a long plan and China has a long plan, not too sure about the United States, Britain or other allies.

There have been many discussions in Congress to reform CFIUS, Committee on Foreign Investment in the United States. The most widely noticed scandal with CFIUS was the Uranium One deal.

Anyway, John Carlin recently spoke with the National Law Journal about bipartisan legislation introduced in November in the U.S. Senate and House of Representatives by U.S. Sen. John Cornyn, R-Texas, and U.S. Rep. Robert Pittenger, R-North Carolina, respectively, to overhaul the CFIUS review process. CFIUS reviews, which are voluntary, are meant to protect the nation from business transactions that pose a national security or strategic risk to the United States. The panel has the authority to require the transaction’s parties to undertake risk mitigation, such as carving out a specific location or element of the deal.

The panel can also recommend that the president block a deal entirely. President Donald Trump, for example, in September blocked the sale of Oregon-based Lattice Semiconductor Corp. to a Chinese company. A deal by Anthony Scaramucci, briefly a White House communications director, to sell his stake in SkyBridge Capital to Chinese company HNA Group Co., which is partly government-owned, appears to be in jeopardy after not yet clearing its nearly yearlong CFIUS review, according to reports in financial media including Bloomberg News in mid-December.Treasury Secretary Steven Mnuchin, who chairs the panel, has urged toughening CFIUS reviews.

While leading the DOJ’s National Security Division, Carlin oversaw the indictment in 2014 of five Chinese military members for economic espionage for hacks against several big U.S. companies, among them United States Steel, Westinghouse, Alcoa Inc. and SolarWorld from 2006 through 2014. The division also investigated the cyberattack on Sony Pictures Entertainment in late 2014 that the U.S. government determined originated in North Korea; and brought charges with the FBI against seven Iranians working for computer companies under contract to the Iranian government and military that conducted cyberattacks between 2011 and 2013 against 46 financial institutions including Wells Fargo and JPMorgan Chase & Co. More here. 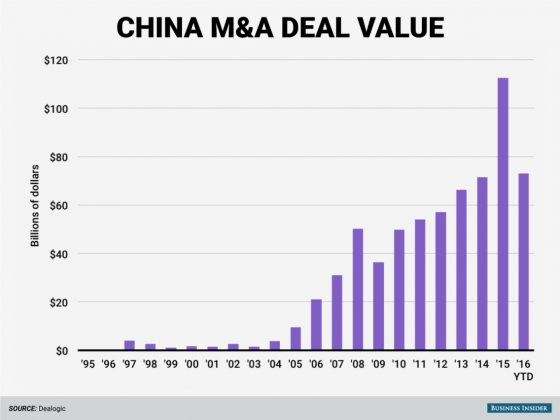 On Friday, a Chinese-led investor group announced it would buy the Chicago Stock Exchange. And then there’s ChemChina’s record-breaking deal for the Swiss seeds and pesticides group Syngenta, valued at $48 billion according to Dealogic.

There have already been 82 Chinese outbound mergers-and-acquisitions deals announced this year, amounting to $73 billion in value, according to Dealogic. That’s up from 55 deals worth $6.2 billion in the same period last year.

Last year was a record-breaker for Chinese outbound deals, with 607 deals valued at $112.5 billion in total. Just over one month into 2016, and China is more than halfway to breaking that record.

So what’s going on?

One interpretation is that Chinese companies are simply hungry for growth as that country’s economy slows, and they’re feeding themselves by buying other companies.

“With the slowdown of the economy, Chinese corporates are increasingly looking to inorganic avenues to supplement their growth,” Vikas Seth, head of emerging markets in the investment-banking and capital-markets department at Credit Suisse, told Business Insider.

Last year, investment bankers earned $558 million in revenue from Chinese outbound M&A deals, according to Dealogic. This year, that number is at $121 million to date.

But there are, of course, a number of challenge these deals will face — especially in the US.

M&A deals in the US are subject to scrutiny by the Committee on Foreign Investment in the United States, or CFIUS. It recently prevented the $3.3 billion sale of Philips’ lighting business to a group of buyers in Asia.

“I would be very surprised if CFIUS did not have an interest in taking a look at this deal,” said Anne Salladin of law firm Stroock & Stroock, referring to the Chicago Stock Exchange deal.