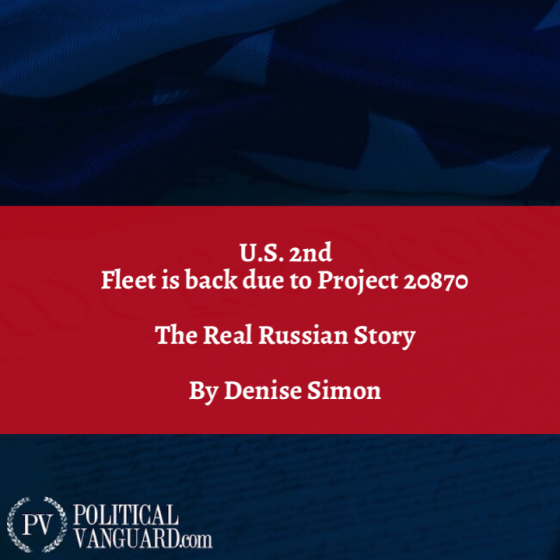 No one pays much attention to Russian activities in the Arctic except the Pentagon. There is a new battlefront happening there and so far the Russians are winning. With little media coverage, Congress has put $717 billion in play and it is assigned to China, Russia and Turkey operations.

As it relates to Russia and the Arctic, there is this big barge moving at about 4 knots and we just can’t trust it. Why?

Named the Lomonosov, it will be able to quickly replace the Soviet-era Bilibino Nuclear Power Plant and the Chaunskaya coal-fired power plant. Of the other six planned Project 20870 floating power stations, five are already set to help Russia’s state-run oil and gas company Gazprom expand its off-shore activities in and around the Arctic region. The last one could go to Dudinka on the Taymyr Peninsula or Vilyuchinsk on the Kamchatka Peninsula, both also in the country’s far north. If the concept proves sound, though, it seems likely that the Kremlin could look to expand the number of floating nuclear power plants, either of Project 20870 type or separate designs, to support additional efforts in the Arctic region, including supporting new or rehabbed military facilities. Starting in 2014, Russian President Vladimir Putin announced plans to refurbish various abandoned sites in the area, as well as build entirely new air, ground, and naval bases. This decision was part of a generally more assertive Russian force policy that had already become apparent with the illegal annexation of Ukraine’s Crimea region earlier that year.

In April 2017, Russian officials unveiled one of the first of its all-new Arctic sites, called the Arctkicheski Trilistnik, which translates variously as Arctic Trefoil or Arctic Shamrock, which sits on Alexandra Land, an island in the Franz Josef archipelago, and is north of the Arctic Circle. It is unclear whether this base’s own power plant, which helps it remain self-sufficient during the winter months when it is largely cut off from the mainland, is conventional or nuclear.

So, here comes the 2nd Fleet. Secretary of Defense Mattis and the Pentagon have been drafting operations and counter-measures on Russian activities. Left unresolved by the Obama administration after the annexing of Crimea and the Russian aggressions against Ukraine, very little attention has been focused on Russia operations in the Arctic, until now.

ABOARD THE USS GEORGE H. W. BUSH, NORFOLK, Va. — A sharp increase in Russian naval activity in the Arctic and north Atlantic in the years since its invasion of eastern Ukraine has prompted the U.S. Navy to resurrect a command it disestablished seven years ago.

At a ceremony marking Adm. Phil Davidson’s change of command with Adm. Chris Grady as the head of U.S. Fleet Forces Command, Chief of Naval Operations Adm. John Richardson announced the Navy was set to reestablish the 2nd Fleet.

The command was merged into Fleet Forces Command in 2011, but the Navy has been talking about bringing it backsince it appeared as a recommendation in the Strategic Readiness Review into last year’s 7th Fleet collisions. Richardson told reporters onboard the carrier George H. W. Bush May 4. “So as we’ve seen this great power competition emerge, the Atlantic Ocean is as dynamic a theater as any and particular the North Atlantic, so as we consider high-end naval warfare, fighting in the Atlantic, that will be the 2nd Fleet’s responsibility.”

To put this nuclear barge into context and history, the Lomonsov was named after Akademik Lomonosov, a scientist and writer that died in 1765. He was born in 1711 in the village of Denisovka, which was renamed Lomonosov after him.

So, one must remember that Russia took over Crimea without a whimper from the rest of the world. Military hostilities continue due to Russian aggressions in the Ukraine. Could it be that the U.S. Navy under orders from the Pentagon are finally going to attempt to manage Russian aggressions in the Arctic? Is there a real strategy here? If there is, that strategy is hardly clear since Operation 20870 has been in process since 2016.