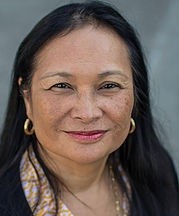 Cindy Domingo is a Filipino-American community activist in the Seattle area. She currently serves as the legislative aide to King County Council-member Larry Gossett, a former member of the Seattle Black Panther Party.

In the 1980s, Cindy Domingo was an active member of Line of March, a pro-China, morphing pro-Soviet communist organization.

Cindy Domingo played a key role in the Asian American and Filipino youth movements of the 1970s and has been a community leader in the Seattle area since then. In the 1970s, she helped lead solidarity campaigns on the University of Washington campus against the Marcos dictatorship in the Philippines. She was active in the Union of Democratic Filipinos, a support group for the then raging communist insurrection in the Philippines, for which she did organizing in Seattle and Oakland.

The 2016 book: “Women Against Marcos: Stories of Filipino and Filipino American Women Who Fought a Dictator” By Mila de Guzman, documents the lives of eight women (including Cindy Domingo), in the Philippines and in the U.S. who “put aside concerns for their well-being in order to fight injustice.”

Cindy Domingo was an active member of the Washington State chapter of Jesse Jackson‘s Rainbow Coalition in the 1980s and served on the boards of the Church Council of Greater Seattle and has been board president of the Center for Social Justice.

Domingo is currently co-chair of U.S. Women & Cuba Collaboration and has visited Cuba 14 times, primarily as a leader of women’s delegations.

She is also a leader of Up For Democracy, “a multi-cultural grassroots coalition for participatory democracy, economic and social justice and peace.”