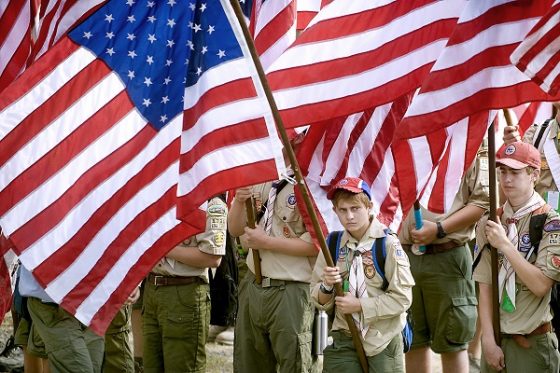 Minutes after awakening this morning, my wife Mary read me this disturbing headline from her phone, “Condoms Required at Scouts’ 24th World Jamboree”. https://bit.ly/2kiCZcp My mind immediately went back years ago to when LGBTQ activists demanded that the Boy Scouts of America accept openly homosexual leaders. LGBTQ activists claimed homosexuals did not intend to change the scouts. They simply wanted to be included. I remember a deceived parent on Facebook saying if the Boy Scouts did not surrender to permitting openly gay scout masters she would remove her son from the intolerant, bigoted hate group.

Mary read out loud from the article that outrageously, the rules demand that condoms be distributed to the under-age kids during the 12 day camping event. My thoughts went to the movie “Planet of the Apes” at the end when Charleston Heston’s character said, “You maniacs! You blew it up! Damn you…damn you all to hell!” https://bit.ly/2IFDK9Q

In 1910, Lord Robert Baden-Powell founded the Boys Scouts Association. In his book, “Scouting for Boys”, Baden-Powell stated his purpose for the organization. https://bit.ly/1L2n6AA

“We aim for the practice of Christianity in their everyday life and dealings, and not merely the profession of theology on Sundays…”

All these years later, wimpy spineless officials and administrators have allowed political correctness and LGBTQ activists to blow up Baden-Powell’s vision; corrupting yet another once great Christian organization. Yes, I am extremely angry.

All who sounded the alarm that allowing promoters of homosexuality into the Christian based organization would change the Boy Scouts were branded paranoid haters. Meanwhile, LGBTQ activists have forced the Boy Scouts to change the original Scout Oath.

“On my honor, I will do my best. To do my duty to God and my country and to obey the Scout Law; To help other people at all times; To keep myself physically strong, mentally awake and morally straight.”

What awesome and upright principles. Imagine how wonderful our country would be if more men lived by this creed. LGBTQ activists have intimidated the Scouts into removing “morally straight” from the Scout Oath. https://bit.ly/2s0xZNI

LGBTQ activists have forced Baden-Powell’s organization to drop “boy” from its name and admit girls in 2019. https://fxn.ws/2FErSTm

Will someone please tell me what was hateful or mean about boy scouts and girl scouts having separate organizations? Do y’all know LGBTQ activists seek to erase the gender line between male and female? Public school teachers are forced to address elementary students as “eagles” rather than boys and girls. https://bit.ly/2J3iBdi

Folks, I am so sick of mainstream people in power cowering to LGBTQ activists. When will someone have the courage to tell these people no? I vow to slap the next Christian who tells me we need to be more passive and loving. I’m kidding. But look where passivity has gotten us.

Whitney Houston was correct when she sang, “I believe the children are our future.” https://bit.ly/1pVwo1V If we keep allowing leftists to confiscate our children, game over. Our future as a great nation is lost.

Years ago, LGBTQ activists beat the crap out of me in the media for asking this question. Rather than forcing the Boys Scouts to abandon its Christian roots, why wouldn’t homosexuals start their own youth organization? What is stopping pedophiles who run NAMBLA (North American Man/Boy Love Association) https://bit.ly/1JjwgnY from starting a scouting program? LGBTQ activists branded me a hater for asking this logical question.

The truth is LGBTQ activists are on a mission to destroy Christian institutions; to force Christians to “approve” their lifestyle. LGBTQ activists seek to force Christians to betray Jesus by kneeling in worship to their false god of depravity. Leftists are working to create a godless America in which anything goes sexually. Everywhere you turn you can see evidence of leftists’ removing traditional Godly principles and values which have made America great. It sickens me whenever I see politicians and people in power caving to LGBTQ activists’ demands.

In 1962, we caved to leftists’ demand to remove prayer from public schools. Schools have progressively transformed from institutions of discipline and learning to hellholes of violence, daycare for parents in middle school, drug abuse, disrespect for authority and students graduating unable to read their dilemmas. https://bit.ly/2J31Cb2 Meanwhile, we keep allowing leftists to have their way.

What great Christian institution, traditional value or principle will LGBTQ/leftists target next for destruction?

The good news is I am seeing signs of more Americans pushing back against LGBTQ/leftists bullying. https://bit.ly/2wZ9OUG

Oh how I long to see the spirit of John Wayne reborn in an American leader with true grit. Oh wait, we have that in Donald Trump. Still, America needs more leaders with backbone to tell LGBTQ/leftists no.