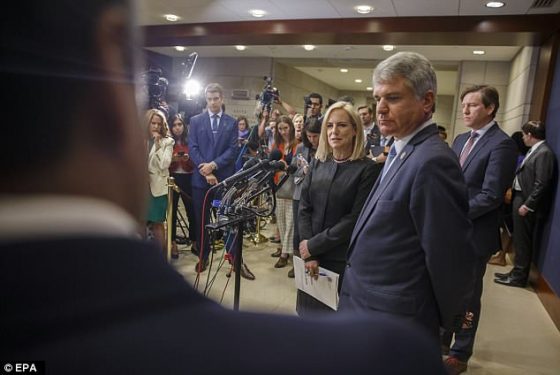 On March 21, 2018, the Senate Intelligence Committee held a hearing after much whining from Democrats on the topic of election security. It was quite the hearing where aggressive and snotty questions were put to current DHS Secretary Kirstjen Nielsen and former DHS Secretary Jeh Johnson.

Since that hearing, the Department of Homeland Security has reached out to almost every state and collaborated on issues of security of voter databases, ensuring security of voting machine software and holding sessions to advise on what transpired during the election year of 2016. Many states have taken substantial steps to ensure integrity of all systems.

The Senate Intelligence Committee members met in closed session to discuss their findings with former Director of National Intelligence James Clapper, former CIA director John Brennan, and former National Security Agency director Adm. Mike Rogers. None has wavered from the conclusions about Russian interference in the election, according to senators who were in the room.

Former FBI director James Comey had also been invited to testify about the findings to the panel, but did not attend.

So, in a classified setting, both the House Committee on Homeland Security and the Department of Homeland Security hosted a briefing on the facts of Russian intrusion into the U.S. election infrastructure where all 435 members of Congress were invited. Those that were whining back in March were on the invitation list. How many finally showed up to assuage their concerns? Less than 50 and by most estimates, it was 30.

The Department of Homeland Security — which found evidence of Russian hackers targeting systems in 21 states ahead of the 2016 vote — is taking the lead on helping states secure their digital election assets. Meanwhile, the FBI is working to counter foreign influence operations. Coats was present to provide lawmakers with an overall threat picture.

“Americans’ votes must count, and they must be counted correctly,” Nielsen said.

Officials provided lawmakers with an unclassified resource guide of the services Homeland Security is offering to state and local officials who request aid, which range from simple cyber “hygiene” scans that can be done remotely to more rigorous risk and vulnerability assessments that require federal officials to be on the ground in states to test their systems.

Lawmakers from both parties have expressed concerns that Russia or other foreign adversaries would look to sow discord in future elections — fears that were echoed on Tuesday.

DHS is offering states voluntary cyber services, including remote checks of their election systems and on-site vulnerability assessments. It’s also granting security clearances to election officials, though they haven’t all been finalized.

States are now deciding how to use their share of $380 million in federal election security grants that came with the omnibus spending package earlier this year. But it’s hardly enough to update aging voting equipment in most states ahead of the November polls, and many state officials are hoping Congress will approve more dollars. More here.