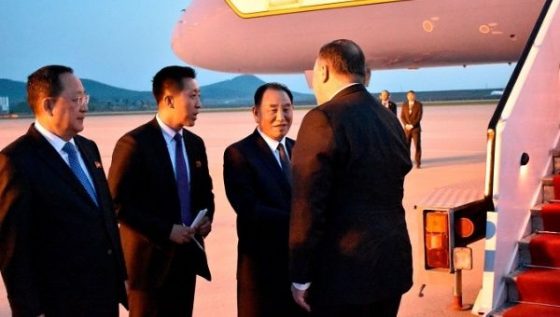 North Korea is holding up to 120,000 political prisoners in “horrific conditions” in camps across the country, according to estimates from a newly released State Department report.

The findings on North Korea come as the Trump administration is working to engage the isolated regime. The White House says the administration continues to “actively prepare” for a possible summit with Kim Jong-Un.

The report, though, addressed the brutal conditions festering inside Kim’s kingdom. It revealed 1,304 cases of alleged religious freedom violations in the country last year, while detailing the harsh treatment of political and religious prisoners — and persecution of Christians.

Secretary of States Mike Pompeo is meeting with 4 Star General and head of the military intelligence, Kim Yong Chol is a longtime spy chief and vice chairman of the ruling Workers’ Party was responsible for hacking Sony. More here.

“The Unha launcher can put maybe 100 kilograms [220 lbs.] into a pretty low orbit, maybe 400 or 500 kilometers [250 to 310 miles]” above the Earth’s surface, Wright said. “By increasing the thrust, it allows North Korea to lift satellites to higher altitudes, or to carry a greater payload to longer distances if it is a ballistic missile.”

Wright noted that the earlier, Nodong engine was essentially a scaled-up version of the one in the Scud, the Soviet missile that Iraq often used during the Gulf War of the 1990s. Whereas the Nodong used Scud-level propellants instead of ones used in more modern rockets, Wright noted that the color of the flame coming from the new engine in photos of the test suggest that this missile uses more advanced propellants that can generate higher thrust. [ buy modafinil in canada Top 10 Space Weapons]

“The surprise has been why North Korea has stuck with Scud propellants for so long,” Wright said. “There have been reports for 15 years now that North Korea had bought some submarine-launched missiles from the Soviet Union after it collapsed that used more advanced propellants, yet in all this time, we didn’t see them launch missiles with anything but Scud propellant.

In 2016, At United States Strategic Command, controllers likely had a high-workload evening as STRATCOM monitored the launch of a Russian Soyuz rocket from the Plesetsk Cosmodrome just eight minutes prior to North Korea’s launch, as is typical for launches from Russia’s military launch site. The ascending Unha rocket was tracked using the Space-Based Infrared System in Geostationary Orbit, capable of detecting the infrared signature of ascending rockets from ground level all the way into orbit. This allows the U.S. military to track the vehicle’s trajectory in real time before relying on ground-based radars to track any objects that entered orbit. More here .

Ah, but there is but one more issue at least. Yes, North Korea imploded their nuclear test site at Punggye-ri. But…there are 4 more locations. 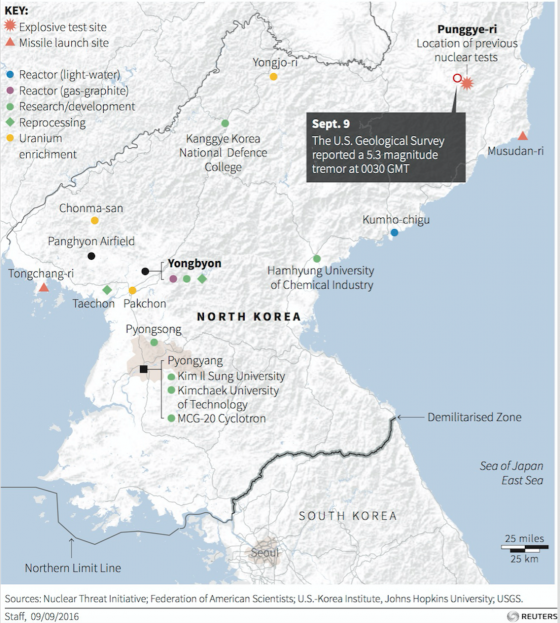 The most important is Yongbyon, while the other locations appear to have slight or no activity.

Further, North Korea maintains a rather advanced air defense system, listed among the top in the world.

However, while North Korean technology is relatively primitive — the nation’s air defenses are coordinated.

“They do have an old Soviet computerized anti-aircraft command and control system. Most of the radars are old, but they did receive some newer Iranian phased array radars,” Kashin said. “This is what I know, the anti-aircraft units are extensively using underground shelters for cover—not easy to destroy.”

Thus, while generally primitive, North Korean defenses might be a tougher nut to crack than many might expect. Moreover, while their technology is old, North Korea’s philosophy of self-reliance means it can produce most of its own military hardware. More here.

Lastly, but hardly finally, is the cyber weapons produced and applied by North Korea.

Most recently is: May 29, 2018, The Department of Homeland Security (DHS) and the Federal Bureau of Investigation (FBI) released a joint Technical Alert (TA) that identifies two families of malware—referred to as Joanap and Brambul—used by the North Korean government. The U.S. Government refers to malicious cyber activity by the North Korean government as HIDDEN COBRA.

In conjunction with the release of this TA, NCCIC has released a Malware Analysis Report (MAR) that provides analysis on samples of Joanap and Brambul malware.

While there has been recent discussions about applying the Libya model to North Korea for removing nuclear weapons, you can bet Kim Jung-Un is going to demand the Pakistan model.